A Look At A Few Requisite Qualifications Of A Ghanaian Politician 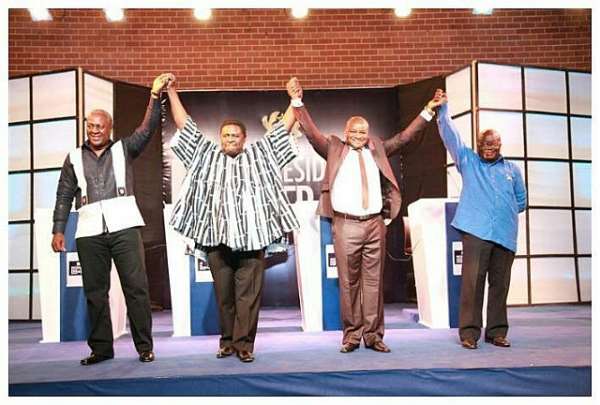 Some professions or careers require marathon and almost punitive periods of training. A profession like medicine does not only demand that would-be doctors are prodigiously intelligent, it also requires that they are able to excel at interviews. And so whilst their mates opting for other areas of interest in the universities generally escape interviews, they are subjected to a gruelling interview. “How did it go?” I once asked my friend who had gone for such an interview. “Hmmh, it wasn't easy, not easy at all,” he mourned. Well, a year earlier, he had told me not to adopt the pessimistic 'it-is-not-easy-oooh' lament that Ghanaians typically said in reaction to unpleasant situations.

He had exhorted me, rather piously, to say “God is in control; it shall be well.” instead. So why he broke the sermon he had so fervently preached, I did not know. But he, most certainly, must have been badly battered by the questions at the interview session. “God is in control. You will excel in Jesus's name,” I said religiously, almost usurping his role. Luckily, he was admitted and now I have no doubt that he will go on strike sometime after his training, hopefully, to demand for better conditions of service. And who wouldn't, after such a lengthy period of mental and physical exhaustion?

For professions (or is it a career or even a business) like being a politician, the requirements are rather varied and awe-inspiring. It does not matter your educational background. You can be a stark illiterate (uneducated), semi-literate (half-educated), literate (educated), or even super-literate (over-educated) where you become a jack of all trades and a master of one art – political tricks.

First and foremost, you must have an unquenchable thirst for being a messianic figure, some sort of a saviour. With that, you have the enviable calling to save the people especially the poor and the disadvantaged. That makes things easier. Who does not want a messiah? Well, a quick look at many of Africa's leaders will offer useful lessons. They come as saviours, brandishing a long, all-purpose whip meant for birching exploiters of the state, the rapists of the economy. They mercilessly flog some scapegoats. But after a while they realise it is easier and much rewarding to exploit than administer exemplary flogging to erring people. Remorselessly, they join the looters. But still they remain messiahs, messiahs, at least, to their cronies.

Also you must have an unbridled love for lies and populism. With an unfailing penchant for deception and subterfuge, you will excel. It is time tested. Be garrulous- give verbose, convoluted speeches replete with nothing but rhetoric and nice-sounding bombast adorned with empty promises. Never give direct answers. But you must accept the first big lie: that you are honest, an honest liar. Internalise it. Don't recant whatever you have said.

Cling on to your past indiscretions and remind those reminding you of them that they are misrepresenting you. Or if they are your fellow messiahs trying to bug you, tell them you were merely, merely re- echoing the sentiments of the masses at the time. If they insistyou said it of your own volition, offer an insincere, perfunctory apology. And voilà! You are a chief messiah- possibly a team A captain in a team B lot.

Next, you must never ever show surprise or shock. You must be immune and impervious to dramatic and mind-boggling changes. A rambunctious, semi-literate guy in my area nearly lost his job because he was startled for about four seconds. He is the political link between the people and the big men. We were in the dying days of the campaign and the serving MP needed to bolster his chances with a fewlies. The people of the area were invited to the timeless tree.

We sat, waiting. After a marathon wait, he arrived to a mechanical welcome. Everyone expected him to re-state his promises, give excuses and a cocktail of lies but he chose an impossible accusation. After saying some meaningless things, he accused the elders of failing to provide the land on which he could site the borehole and the public lavatory they had asked for. He turned to the guy who was seated next to the elders on account of his special role and said: “Isn't it so?” intending to incriminate him in case there was a backlash. The guy was shocked. For about four seconds he was dumbfounded, speechless. Then he recovered and eagerly said: “yes…yes…honourable”.

The honourable's face smoked with fury. The elders were equally stunned. But one of them admitted rather unnecessarily that he had heard about it but was sorry not to have informed everybody about their search for plots of land to site the projects. Everyone knew he was lying but was not interested in belabouring the matter. The elders would have abandoned the meeting but there were pots of pito (a local alcoholic drink) foaming invitingly to be drunk. In the end, a jovial elder after gulping two calabashfuls of the stuff, confessed: “No amount of lies can stop me from drinking this to my fill. We all know they milk us and feed fat on us but if this little is brought, I would not refuse to partake of it. A helpless man does not reject the offal of a fowl because he knows he is entitled to the whole bird” he stressed.

Then again, you must have the proclivity to insult, slander, demean, defame, degrade and disparage. Possessing an unlimited amount of choice, rancid insults is an absolute necessity. And you must spare no one. For instance, if a revered man of God offers a constructive criticism in an analogy of a sinking Titanic ship. Don't wait a second. Launch into a tirade against him. Accuse him of 'enviness'. Don't even bother about the nagging blunder that that word does not exist.

You are trying to teach our erstwhile colonial masters with their imperious airs that they ought to be more creative. Why 'happiness' and not 'enviness'? In any case, language is productive and you may be responsible for a new entry in the next Oxford Advanced Learner's Dictionary of the English Language (and perhaps, Culture). Then pledge your unflinching, limitless, unrestrained support for the leader of your party who is also the president of the nation.

But you are not done yet! When you are a leader, be ready to fire people appropriately or arbitrarily. Fire them or more euphemistically ask them to proceed on their accumulated leave. Tell them to rest. Too much work kills and they must live to vote for the party. Organise a press conference and remind the people running you down that you have the overwhelming mandate of the people. But psyche yourself up; machete-wielding foot soldiers may be heading your way.

They will besiege the premises. Just put the conference on hold, ask “cutlasses?” twice and you would disappear into thin air. The Invisible(but physical) force and the police will deal with them. The police will beg them to be restraint. And to the nosey journalists, tell them that a few drops of rain cannot be a rainstorm or a torrential rain. And maybe next time acquire a cutlass-proof jacket. And some jaw protectors that are at least 'fisticuffs-proof' just in case some of the hefty punches exchanged by the foot soldiers accidentally land on your cheeks. If you are a foot soldier, no qualms at all! Your jaws are solid, unbreakable!

Additionally, be tight-lipped or as discreet as possible about your remunerations and perquisites (perks). Increase them astronomically. You deserve them. You are doing a voluntary, sacrificial job. If teachers, UTAG and POTAG, tag each and)go on strike. Don't bother too much. Perhaps they would call it off out of strike fatigue, probably. Just concentrate on the per diems. They are very important. These qualifications are just but a few. Of course, a voracious love for cash, money or kudi cannot be missing.

The author studies French at the University of Ghana.

His email address is [email protected]