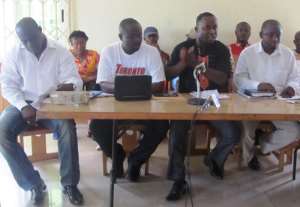 Some of the assembly members at the press conference

'Again I saw that under the sun the race is not to the swift, nor the battle to the strong, nor bread to the wise, nor riches to the intelligent, nor favour to those with knowledge, but time and chance happen to them all.

'For man does not know his time. Like fish that are taken in an evil net, and birds that are caught in a snare, so the children of man are snared at an evil time, when it suddenly falls upon them.' Ecclesiastes 9: 11 - 12 (ESV).

There are different kinds of seats. Some are cold and permanent while others are hot but temporary and vice versa. There are traditionally-created stools (seats) and politically-created ones. Arguably, party political seats are the most peppery which attract much widespread acrimonious disputes.

Of all the 22 Ministries of the Government of Ghana, the Youth and Sports outfit is perhaps the hottest and most controversial. Ministers do not last on the seat at the Youth and Sports Ministry. How many months did Mallam Yusif Issah spend at the ministry during the Kufuor administration?

Similarly, among the 216 Metropolitan, Municipal and District Assemblies (MMDAs) in the country, the Kumasi Metropolitan Assembly (KMA) is likely the fiercest.

In November 2005, the Ghanaian Chronicle in an article entitled, 'Who grabs KMA hot seat?' said, 'Whoever is nominated by the President for the position of the Chief Executive Officer of the Kumasi Metropolitan Assembly (KMA) will surely have a problem on his hand.'

Obviously, taking a cue from John Maxwell's maxim: 'A leader is one who knows the way, goes the way, and shows the way,' Eric Opoku, a former Ashanti Regional Minister, had a word of advice for the current KMA boss, Kojo Bonsu. Precisely, he showed him what he (Bonsu) must do to avoid disputes and controversies.

It appears that the minister knew how hot the KMA seat was. He knew the way and as a brother in the same political grouping, he decided to forewarn the KMA boss to be forearmed in terms of how to conduct himself.

Kojo Bonsu, former Chairman of the National Sports Council, was appointed by President Mahama and subsequently confirmed by a majority decision of the assembly members, polling 95 out of 130 votes – representing 73 per cent on April 16, 2013.

During his induction into office, Eric Opoku, the then Regional Minister warned Kojo Bonsu, former acting Managing Director of Ghana Oil Company (GOIL) to 'avoid frictions with assembly members and other staff'. He also warned the KMA CEO to refrain from any action that had the tendency to bring the presidency into disrepute.

However, a few months into his administration, Kojo Bonsu has been fighting his assembly members over allegations of dubious deals, corruption and fraudulent practices.

Can it be said that the Kumasi Mayor has fallen into the Aristotle's observation that 'He who has never learned to obey cannot be a good commander?'

Many were those who from the onset had doubted the current KMA boss' ability to avoid controversies in order to work harder than his predecessors - Samuel Sarpong, Patricia Appiagyei, Kofi Jumah and Nana Akwasi Agyemang, aka Okumkom – considering his flamboyant lifestyle.

Kojo Bonsu is the only KMA CEO who shortly after his appointment and confirmation, flooded the principal streets of the city with giant billboards, depicting his magnificent portrait to announce his occupation of that political office.

A number of radio stations sang his praises, touting his administrative credentials and international links which they believed would be harnessed for the development of the city.

But 17 months after taking office, what has been achieved to boast about? Currently, uneasy calm between the MCE on one hand, and some assembly members, on the other, has gripped the assembly.

They specifically 'cited the construction of Rattray Park, Kumasi Academy's assembly hall and the proceeds accruing from the Kejetia Lorry Terminal as some of the avenues the KMA boss was using to siphon money' (DAILY GUIDE, July 7, 2014).

Unfortunately, they could not disclose the amount of money spent on those projects, so far. According to them, Kojo Bonsu had rendered the Executive Committee of the assembly with the oversight responsibility redundant.

Some high-placed KMA officials could not even give details about the construction of the Rattray Park except to confirm it and show its location.  It is being constructed at Danyame, opposite the Golden Tulip Hotel.

The Kojo Bonsu's Rattray Park initiative has been described as an amusement park akin to the collapsed Adehyeman Gardens which served as recreational grounds for children.  Sources close to the assembly alleged that GH¢850 million had been spent so far on the construction of its fence wall only.

But, the project is likely to be halted as KMA has reportedly been cited for lacking lease or land title for its execution. Members of the Great Asaman Kani royal family of Kumasi, who are said to be the owners of the land, are threatening to institute a legal action against KMA and Lands Commission.

Should this threat be carried out, Kojo Bonsu would have wasted a whopping GH¢850 million and other precious resources resulting from lack of due diligence, incompetence, mismanagement, and poor leadership.

Before he officially started work, Kojo Bonsu had given assurance in his victory speech that he would enhance the socio-economic development of Kumasi, plant trees, reclaim the waterways that had been polluted and ensure good sanitation in the metropolis.

Barely 17 months into his administration, what could be said of the achievements of Kojo Bonsu? Yes, there are billboards erected in the city showing his tree planting promise, but the trees are yet to grow for us to see.

What about the reclamation of the waterways, the enhancement of socio-economic development and the promotion of good sanitation in the city?

How many waterways has he been able to reclaim so far? Can he tell us how he has improved the living conditions of the people? How clean has Kumasi been since he assumed office?

The KMA boss has simply abandoned the promises he gave in his victory speech and is now concerned about relatively unimportant projects like the construction of amusement park. Which children will use the park? Will they be the children of the urban rich or urban poor – who are confused as to what to eat, wear and where to put their heads?

The major achievements of Kojo Bonsu as the mayor of Kumasi include the institution of 'happy hour' for the staff of KMA, introduction of biometric system to monitor time of arrival and closure from duty by workers and regularization of the use of the assembly's letterhead.

One other achievement by the mayor which has gone into the history of the assembly is his ability to influence the workers, especially the senior staff, to wear suit to work.

The District Assembly concept was to ensure that the development of any district or metropolis enhances the overall national development. One would like to see that the KMA is focused on these developmental goals.

The question is: Are we seeing this or it is yet to happen?