End of African darkness is near 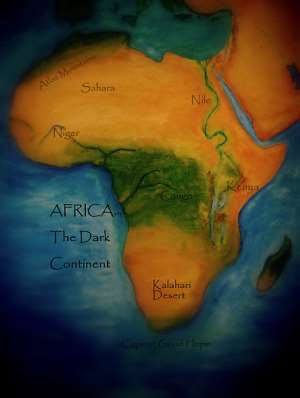 “Ghana is never a poor country, it is a rich country,” said the old man in the Spot shouting on the White Man.

75% of world's natural resources are located in Africa. Using them makes in less than 100 years Africa an empty and poor continent. This time window is crucial for African countries to use wisely being able to feed their people of the coming generations.

Every African country has to address the conditions and needs of the three levels of living in a society: basic living, standard living and luxury living.

The White Man has played an appalling role in African history and current affairs. Colonialism and Imperialism are no longer excuses to be used for African Black leaders to explain the status of their countries, of civil war, genocide, fighting for the right religious believes and avoidable feminine in deserted countries. The White Man still does not understand African Souls and Spirits.

A sick man does not care of the colour of his Doctor's skin as long as he has trust in his professionalism to heal his body and mind.

It is wise to learn from history and copy successful countries incorporating success stories into it's own historic and cultural conditions. The world is created as one by which what takes place in one country effects others. We all have to take responsibility for each other as humans and nations standing side by side as brothers and sisters made of one Creator.

Democracy is the best political system humankind has invented so far. I works well in Europe and USA but is only benefiting humans when the time is right and the foundation is laid in specific countries.

White Men have the tendency wanting their values to be seen all around the world ignoring different countries require different means for a successful running of state affairs. Africa cannot jump from Colonialism into Democracy with no intermediate phase in between. Singapore is a success story clearly proving this fact.

African countries working well for their people still have the White Man in their political and administrative systems. There is nothing wrong to confess that African countries need help from the White Man to run their state affairs but a clear sign of wisdom to use the given time window for change effectively as time is running out everyday and no human can stop the clock to reach darkness and tears or light and happiness.

Democracy is a cures and not a blessing to Africa. Social Dictatorship is the answer for the next one or two Generations of Africans.

Asians are good in copying by which they have progressed in the shortest possible time overtaking Africa by storm. When asking a Chinese whether he knows Jesus Christ he will answer no, but when he will be given a photo of him he can copy him, is a clear statement.

Now the time is right for Africans to copy historic events and developments. Three hundred years ago the Old Fritz, as Germans call their former Prussian King Friedrich the Great, changed Germans to be effective people making out of a country with no natural resources and three mayor events during last century (World War I and II and Reunification) the richest country in Europe and number four in the world by using force.

During Medieval Age Germans were not reliable people, not working with time, not honest, poorly organized and only thinking for themselves. Old Fritz had to face feminine in his Kingdom resolving it by royal decree to order every farmer to plant potatoes. His ambition was to expand his Kingdom and set up an Army which every adult male had to join for several years. This time he wisely used to train them not only military crafts, but effective and positive character skills to form a new generation of Germans. Sent back to their families after ending their national service, they

influenced their families and friends by correcting their behavior mistakes pointing to the King's orders.

A country in a mess like Germans were became a country that many European neighbours trust to be the leader of the European Union regardless of the many wars Germany had started against them and they had between them.

To govern a country is no magic, it is a complex yet simple craft someone can learn like carpentry or plumbing.

To solve a problem and mistake needs confession of sins and entering wrong paths which is no shame to do but shows strength and wisdom in the people of a nation.

To employ a White Man as it's highest Servant of an African Nation is such a wise solution as long as no Black Man can be found in a country having a White Mentality.

Once chosen and trusted, he must be given absolute power for a set time with clear job description and to which to transform the African country in question.

The first African country that realizes and practices this simple truth will be seen by the White Man as a raw model for a transformation of a troubled continent that will otherwise sooner or later be a great burden to the rest of the world once the soil of Africa is empty with no natural resources anymore and the fight for food, water and a decent future of it's people. Investors will rush into such a country to support the change and cash in on the exciting new development ensuring to be the first in the new area and secure their share of the market.

It is entirely in the hands of Africans to accept the helping hand of a White social Dictator and end their years of misery in order to use the given window for happiness wisely and powerful. Money with no wisdom is useless but money with wisdom is so powerful as the Bible is teaching us. Instead of eating today the bread and fruits of the next two generations of Africans, grab your chance and use it with wisdom. White people are here to serve Africa !

When Africans do not change by their own will and strength to live in the light of the world, time and evil forces will change them for the worse in the shortest of time.

The African Youth and Internet Generation is hungry for a change and open to confess mistakes made in the past and at present to be wise enough already to ask Professionals to lead them with powerful force enabling a drastic change in the shortest possible time that is left before the end of what is left in African soil. Africa; take this world into your own hands before others will take you into their hands again.

The new Generation will say in the Spot:”Africa in it's diversity has many productive ideas the whole world is benefitting from and the world is learning from us !”

An Illusion and Dream of a mad man ? Be careful: Dreams have the chance to become true when you believe in and consistently work on them!