Celebrating Fifteen Years Of The Asantehene, Okyenhene And Forty Years Of Okuapehene; The Fate Of Chieftaincy In Modern Ghana 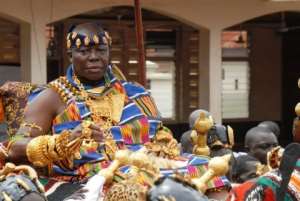 As the Asantehene, Otumfuo Osei Tutu II and the Okyenhene, Osagyefuo Amoatia Ofori Panin both celebrate fifteen years on the Golden Stool and Ofori Panin Stool respectively, as well as the Okuapehene, Oseadeeyo Addo Dankwa III also celebrates a huge landmark of forty years on the Ofori Kuma stool, this article takes a look at Chieftaincy itself, some success stories of chiefs over the years and the fate of Chieftaincy in modern Ghana in the face of daring challenges.

Chieftaincy as we may know is one of the oldest institutions in Ghana and actually one of the few remaining cultural relics of the past.

Dating back to somewhere in the fourteenth century, chieftaincy has become an embodiment of our existence as different groups of people who would later come together to form the nation Ghana. A dip into the archival sources reveals that Kings and chiefs were much revered in the olden days than they are today thanks to the emergence of democracy and its associated changing hands of power from chiefs to politically elected or appointed figure heads.

Chiefs in the past and even today remain the nodes of connection between the central government and the ordinary people of the community and sometimes the larger group of people depending on the status of a particular chief. In other words, they are the mouthpiece of the ordinary citizens of a particular community. They have also mobilised their people for development in the past, a clear example of such great king in this regard was Okyenhene Nana Sir Ofori Atta of Akyem Abuakwa who founded the Abuakwa State College at Kyebi for his people.

Chiefs in the 21st century Ghana have also not slept on their stools and skins but also strive to bring development not only to their various traditional areas but the country at large. The Asantehene, Otumfuo Osei Tutu II on his enstoolment 1999 vowed to improve education in Ashanti and Ghana as whole. He set up the Otumfuo Educational Fund awarding scholarships to the teeming needy but brilliant children throughout Asante and beyond and also building educational infrastructure in places in dire need. Today he has the Otumfuo Charity Foundation that tackles the various spectrum of developmental needs such as HIV/AIDS, Healthcare, Environment among others.

The Okyenhene is also not left out in bringing development to his people and Ghana as a whole. On his enstoolment as Okyenhene in 1999 he vowed to wrestle the wanton destruction of the environment in his Kingdom, he set up the Okyeman Environmental Foundation to champion that cause. Indeed, he has been the loud mouth of environmental preservation ever since and the zeal to see the environment protected has culminated into the establishment of an environment and agriculture university to oversee that agenda. He also has much interest in Education, HIV/AIDs, Sanitation, and issues relating to child development, subsequently he has an endowment fund for these areas of interest. It is worth mentioning that he broke an ancient tradition (barring chiefs from running) to lead a marathon and actually tested for HIV in public, a feat, he is the first traditional ruler to chalk.

The Okuapehene over the last forty years of his enstoolment has brought peace and development to the people on the Akuapem hills and beyond. Serving as the president of the eastern regional house of chiefs, he had been instrumental to the peace and development of the Eastern Region at large and the people of Akuapem specifically. Readers would recall when conflict broke out in Akuapem somewhere 1994 culminating in the withdrawal of allegiance of some Akuapem chiefs to the Okuapehene Ofori Kuma stool, he remained steadfast as if he knew peace would once again return to Akuapem. Today the matter has been resolved amicably restoring Akuapem back to its former glory of peace loving people.

It would interest readers to know that the Okuapehene is the traditional nephew of the Okyenhene. A brief history of the Akuapems tells how the Akuapems ( then loose groups of Guans) solicited the help of the then Okyenhene, Nana Ofori Panin to ward off the Akwamus who were terrorising the Akuapems, the Okyenhene readily accepted to help and dispatched his nephew Safori who led a thousand forces to defeat the Akwamus. As a reward for the gallant Akyems, he was asked to stay and rule over the Akuapems and a stone planted to that effect, the Okyenhene gave his royal blessings to Safori the new king of Akuapem. This brief tells how the Okyenhene is the traditional uncle of the Okuapehene. The Okuaphene Oseadeeeyo Addo Dankwa III has written a number of books including “The Institution of Chieftaincy in Ghana; The future”, and “Christianity and African Traditional Beliefs”.

Obviously it has not been easy for the chiefs in achieving some development feats for their people and country at large, gone are the days of “see no evil nor speak no evil of chiefs”. In times past flouting a chief's order could lead to decapitation of the culprit not to talk about speaking evil of a King. However, today, thanks to modernity and democracy chiefs have become objects of vilification and public ridicule in our country sometimes by their own subjects. Not even the highly revered ones such as the Asantehene and Okyenhene are spared in this spectacle. Mostly, clear sabotage have been evident in this practice.

Typical saboteur works include an allegation perpetrated by a royal of the Ofori Panin Stool that the Okyenhene was highly involved in galamsey in 2011, almost bringing the Okyenhene's much touted campaign against environmental degradation into disrepute. The Asantehene was also not only accused of been an accomplice in the infamous MV Benjamin missing cocaine saga but also buying a magnificent mansion in London at the expense of his people among others but thankfully all these allegations turned out to be false. In the face of all these works of saboteurs, not only do the chiefs continue to work hard to bring development to their communities but also continue to be relevant in the day to day running of communities as well as matters relating to the preservation of culture and traditions of our dear country.

In ending this piece, I would call on Ghanaians to appreciate our chiefs and support them in their quest to bring development to their people and desist from mudslinging our revered chiefs. I would also encourage our chiefs to remain resolute in their quest to seek development for their people in the face of such vexatious and frivolous allegations. God bless them as they mark another milestone on the Golden Stool,the Ofori Panin Stool and Ofori Kuma Stool. Happy anniversary to all other chiefs marking significant milestone this year 2014. On a lighter note, I wish to invite all lovers of chieftaincy, culture and traditions to the grand anniversary celebrations in Kumasi this May, Akropong in October and December in Kyebi of the Asantehene, the Okuapehene and the Okyenhene respectively. Long live Chieftaincy Long live Ghana!