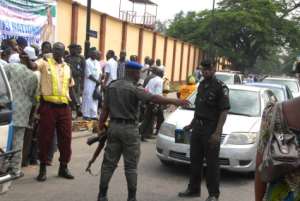 Abstract:
Private Security Companies in Ghana have not witnessed any known comprehensive empirical analysis throughout its existence. This underscores the perceptive nature of the industry and lack of available literature on the privatisation of security companies in Ghana. This paper reveals the emerging trends of security companies in Ghana and proposes policy guidelines that will regulate the existing framework for the industry to function effectively. A country with a population of about 25 million, the landscape of Ghana's private security industry is thronged with various actors whose activities are mostly unacceptable. The study advocates for a robust regulatory and oversight scheme within an effective institutional framework that fundamentally addresses human security as well as institution's interest. Findings of this research has also shown that Private Security Companies Act must be urgently reviewed and appropriate amendments be effected to address inadequacies with respect to the structural and legal construct of the industry to ensure an efficient and inclusive institutional framework.

Introduction:
The provision of effective security protection has become a major problem in Ghana due to lack of adequate funding, population growth, infrastructural development and lack of policy direction. These challenges have contributed to the failure of adequate security protection, hence the proliferation of these private security companies providing effective policing in homes, communities, banks and some government institutions. It is against this background that the following recommendations have been made to all stakeholders who are involved in the provision of security in the country to regulate private security companies to enable them function effectively.

Badong (2009) talked about the increasing nature of crimes in our society and stressed that Ghana witnessed a sharp increase in crime especially in the early 1990s ranging from mass murder, serial killing of women, armed robbery, chieftaincy disputes, and land disputes. All these crimes have changed Ghanaians perception about the state of being and have started looking for their own protection to defend themselves against future attacks. These have given rise to private security companies to augment the existing state security apparatus to provide adequate security to the people. According to Atuguba (2007) the work of policing had over the past fifty years has outgrown the capabilities of the Ghana Police Service (GPS) and the advent of the legislative framework or instrument that established the institutions like the private security companies and some legal and illegal bodies like 'landguards,' community watch group, and palace guards are clear indications of GPS inability to provide effective policing. According to Atuguba (2007) the Ghana Police Service which has an oversight responsibilities of the private security companies have not witnessed any radical form of review except in 1948 when the colonial masters termed the service, the then Ghana Police Force (GPF) into a brutish organisation to intimidate agitating Ghanaians.

Contributing to this new development, George Asiamah (2002) the then Director General of Legal and Social Duties at the Ghana Police Service also said, 'Ghana's police population ratio which stood at one police to 1178 persons which was more than twice of the United Nations requirement of one police officer to 500 persons.' This figure clearly shows that the Ghana Police Service has failed in providing adequate security in our homes, communities, government departments, financial institutions as well as individuals.

Methodology: The research consists of a structured face-to-face interview, literature review and analysis of library research data and online sources. Theoretical survey was made on the basis of available literature and articles. The literature review considered available literature on private security companies in the context of regulation, oversight and policy guidelines within the Private Security Industry in Africa and the rest of the world as the reference point for the appraisal of what exists in Ghana. The main study methodology is qualitative document analysis.

Background of the Ghana Police Service: Professional policing was introduced by the British Colonial Authorities to the Gold Coast now the Republic of Ghana in 1821. Prior to that, policing or maintenance of law and order was organized by the traditional authorities such as the local chiefs, traditionalists and herdsmen who employed unpaid messengers to carry out the executive and judicial functions in their respective communities. In 1894, the Institution of Police was formalized with the passing of the Police Ordinance which gave legal authority for the formation of a civil police force. In 1902 the force was split into General, Escort, Mines and Railway Police, which was legalized by the Police [Amendment] Ordinance of 1904. The Marine Police was formed in 1916 but disbanded in 1942 and replaced by Customs Excise and Preventive Service. The Criminal Investigation Department [CID] was formed in 1921 with the finger print section fully operational in 1922.

In 1948, the Police Reserves Unit was formed to combat riotous mobs, following the 1948 riots in the country. The wireless and Communications Unit was formed in 1950 with the formal opening of the Police Information Room in Accra by the then Governor of the Gold Coast, Sir Charles Noble Arden Clark, in June 1950. By 1952, a large number of Africans were enlisted into the Police Force as junior officers. The women branch of the service was then established to be responsible for Juvenile crimes and offenses committed by women. In 1958, the first Ghanaian Police Commissioner, Mr. E. R. T. Madjitey was appointed to head the service.

Proposed Policy Guidelines for Private Security Companies in Ghana A security expert, E. Aning called for a revision of the law regulating the operation of private security organisations in the country to inject sanity into their operations. He said, the existing legal frameworks regulating the industry, such as the Police Service Act, 1970 (Act 350), and LI 1671, which was revised in 1994, were weak and needed to be reinforced. It is in light of this that the following recommendations were proposed to stakeholders of the security industry such as the government, legislature, civil society, private security companies and international organizations to regulate the system by recognised and competent bodies.

Government: The government should have a thorough review of the country's security system especially the Ghana Police Service and make amends by devising a strategy that will make them more resourceful in terms of equipment, remunerations and recruitment of more staff as well as accommodations to enable them carry out their duties in a more congenial atmosphere. These are the major problems hindering their operations to provide adequate security protection to the citizenry.

Government should continue to have an oversight responsibility to regulate the security companies in the country to ensure that they operate under the ambit of the law. Ghana Police Service should organise periodic training to these private security companies and perform other functions such as the acquisition of licence to operate, security background checks and issuing of permits.

The government should strengthen its institutions such as the ministry of interior, defence and the foreign and intelligence unit to provide material and human resources, such as advanced technology systems needed to act swiftly to security issues while addressing internal political wrangling and chieftaincy disputes that requires provision of adequate security.

Government should directly involve in the purchase and selling of arms to the private security companies and any company that expresses its interest in the arms trade should apply through the government department that is responsible for granting of permit to such individuals or companies. This will give an accurate statistical data regarding the number of people in the country who have access to arms. It will also give a fair assessment to the government to take stock on the number of people or companies that possess licensed arms in the country and to ensure that people who possess unauthorised weapons are made to face the full rigours of the law.

Parliament should delegate some powers to a particular body or organisation to check the activities of these companies and define the kind of activities that they can engage themselves in which are very acceptable to the state. The law should empower such body to exercise oversight responsibilities in the issuance of licence and acquisition of permits to operate.

The legislation should regulate the conduct of individuals involved in providing security to the state by having the power to impose severe sanctions such as withdrawal of licence, seizure of properties or seizure of company's assets. The legislation should reform the police service and intelligence unit and concentrate on changes in control, structure, organisational culture and composition.

The ministry of defence should be seen as technically efficient and a force to be reckoned with by organising periodic training for the sector to equip them, using scientific methods to combat crimes.

Private Security Companies:  Association of Private Security Organisations of Ghana (APSOG) should design modalities in acquiring licence and qualification criteria to prevent people who are not qualified from entering the industry. Further to that, before a licence is issued to a particular person security background checks should be conducted by the Ghana Police Service to ascertain whether the person is of good character. All qualified persons should renew their licence every two years and those whose licence has expired lose their membership. There should be adequate skills training to equip members, and there should be constant check of licence of operation and those without proper licence should not be allowed to operate. Adequate training such as weapon handling and arms control should form part of their training to control local 'machomen' and 'landguards' who usually cause trouble in conflict areas and other parts of the country.

Civil Society: Civil society, traditional authorities, religious groups and interest groups should continue to act as community watch dogs to ensure that crime is controlled to the barest minimum. They should continue to play their vigilante role in ensuring that private security companies comply with the legislation governing their activities.

They should continue to play an active role to ensure that the provision of security will not be the sole responsibility of the state but with non-state actors who have the capabilities to provide effective community policing in homes, government departments and private institutions.

Civil society groups should also advocate for proper training for this 'land guards' whose activities have been described by some Ghanaians as illegal. Effective training and workshops should be provided to these landgurds and those who excel be absorbed into the main stream to restore sanity. This will eliminate the misuse of arms by these people who normally attack people without any cause just on the reason that someone has encroached a piece of land that they have been paid to protect.

International Organisations: Provision of effective security in any developing country like Ghana is an integral programme for the people that provide peace and security such as the United Nations, International Human Rights Organisations and ECOMOG. These institutions should continue to support private security agencies in the country by organising seminars to educate them on modern ways of combating crime.

They should continue to provide logistics such as arms, modern gadgets to investigate crime and constant refresher courses on effective ways of protecting citizens. Joint military exercise should be conducted periodically in all parts of the country to train security personnel on the use of some sophisticated machines to fight crimes and other related issues.

Conclusion: Our research findings have shown that the ineffectiveness of security companies in Ghana is due to Ghana's government budget constraints which have had adverse effect on proper security provision. The study however recommended that institutions like the IMF and World Bank set aside specific money to support any programme that the government initiates to augment the current security personnel. International organisations should assist the state to recruit more personnel into the army and police service to ensure that they are well trained and well-resourced in terms of equipment to fight crimes.

E. Aning (2002) – Ghana Police Service is more focus on Crime Prevention rather than Protecting the Citizenery

A. F. Musah (2002) – Privatisation of Security: Arms Proliferation and the Process of State Collapse in Africa, Development and Change (Vol. 33, No.5)