Our Most Electrifying Poet Has Gone To Sleep (Dr. Molefi Kete Asante) 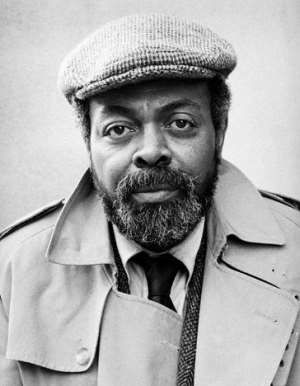 Amiri Baraka, a brilliant light that shined brightest when in the middle of battling for his people's rights, has taken the eternal sleep. His manifest destiny was to make racial criminals and political thugs angry and uncomfortable. This is why the poems he wrote agitated the establishment and made him a righteous defender of human freedom. He was a free man and in that freedom he was free to be bold, to be wrong, to be strong and to be adventurous, and to be right. Always capable of self-correction, Baraka's ability to take the dagger of his words and strike the blow for truth as he saw it was uncanny and a part of his genius.

We will miss him and his poems and plays and essays that provoked a generation. Nothing anti-African passed him without a comment and nothing was so close to him as his battle with his own intellect. Baraka set the model for radicalism in literature during the Sixties and Seventies and young writers seeking to do justice to the masses should find his example instructive. He was often rejected by the established mainstream but embraced by the progressive forces in the society although he was not always comfortable with the embraces he received from the Left or from Black Nationalists.

Baraka's rewards and awards like those of James Baldwin were in the respect his own people held for him. Indefatigable as a poet and prophet of victory for African people, Baraka shook the tree of creativity so powerfully that all forms of modern poetic voices like slam, rap, hip hop, jazz poetry with music in the background, urban hollers, and blues sound fell from the branches of his explorations. We will miss him and recreate him a million times to come. So long live the revolutionary artists inspired by Baraka, Larry Neal, Charles Fuller, Haki Madhubuti, Sonia Sanchez, Nikki Giovanni, and a hundred others who felt the call of the word and the art with the same reverberations as Baraka.

Fed up with poetry that did not transform people Baraka called for poems to do more than speak simple words since the conditions of blacks demanded more robust poetry. The l965 manifesto “Black Art” asked for “Assassin poems. Poems that shoot guns/Poems that wrestle cops into alleys/and take their weapons leaving them dead/with tongues pulled out and sent to Ireland.”

Baraka was influenced by African American philosopher Maulana Karenga, jazz musician John Coltrane, and Ray Bradbury and Ginsberg. In the early l970s Baraka was the leader of the New Ark in Newark, New Jersey, a nationalist organization, and served as one of the leader of the Kawaida Movement during that period. His cultural ideas merged with those of Larry Neal and other African American thinkers as he became one of the driving forces behind the National Black Political Convention of 1972.

Baraka believed and practiced art as a politics because he truly felt that art could and should change people.

Critical, opinionated, and smart, Baraka spoke his mind on everything from Charles Fuller and the Pulitzer Prize to “Somebody Blew Up America,” from Maulana Karenga and Kwanzaa to Spike Lee and his filming of Malcolm X. He commented on Black Nationalism, capitalism, Pan Africanism, Hollywood, the Holocaust, anti-Semitism, poverty, and American politics.

The time will come and we will bring it when despite his jarring language and his passionate opinions the world will recognize his exceptional genius. Long live Baraka's spirit of rebellion!