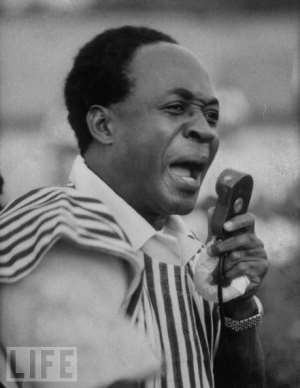 'The most important ally of the oppressor in the act of oppression can be the collaboration of the oppressed himself,' declared André Brink. This statement defines a pointed observation that is not only merely elementally true but pregnant with huge sociological significance as well.

The statement also carries an atmosphere or depth of historical and contemporary factuality that one cannot easily, idly, blindly, or casually dismiss without subjecting it to additional burden of serious analytic calculus. 'Emancipate yourself from mental slavery, none but ourselves can free our minds!' ran the creative psychoanalytic lyricism of Bob Marley.

Of course, both the ideational and orthographic foundation of Bob Marley's psycho-redemptive lyricism derived partly from the oratorical library of Marcus Garvey. But the great Iroko tree of Marley's and Garvey's wisdom is deeply rooted in the fertile soil of Ananse folklore, which constitutes, even today, an ethno-mythological streak of Jamaican Maroon culture. This speaks volumes about the violently penetrating transnationalism of African culture! The cultural transnationalism of Surinam fufu, of Haiti's voodoo, of the Angolan-derived Afro-Brazilian capoeira, of the Caribbean and South American Yoruba-derived Orisha and -Esu-Elegbarathe trickster, and of the traditional Jamaican dukunu (Ghana's 'Kenkey' or Akan's dorkunu, dokono, dokunu, etc.) is not only an anthropological or historical fact but also a contemporary fact. Even the words jazz and banana (and several others) have undeniable African etymologies. Finally, the philological methodology used by the great African American folklorist Zola Neale Hurston had more to say about African linguistic transnationalism. Brothers and sisters, this is to merely restate the Pan-African connectionthe obviousthe historico-cultural commonality of the African collective experiencecontinental and diasporic.

But that is beyond the point. What is our immediate point then, our pointed pointedness? The foregoing desultoriness aims to set our psychological taste buds afire. What do I mean? To warm up our minds to today's dialoguethe question of Ghana's, of Africa's, total self-emancipation. Pointedly, self-emancipation is either a corollary or correlate of personal, community, or national development. Self-emancipation sets an individual's or nation's psychology free, thereby releasing more transformative fuel for the progressive actuation of change, positive change, I mean. Self-emancipation also frees the personal or national self from the claws of helpless psycho-cultural dependency on the external non-self. In other words, self-absolution is the ultimate gateway to our psychological ejaculation, our creative incontinence, that is. This is my basic point, in fact. As we can see, there is no need to essentialize or belabor it any further!

Again, what is my point? My point is that of a question of unequal dichotomy, the mismatch accruing to the political economy of 'they,' the rest of the world, and 'us,' Ghana and Africa. In the article, 'France and Francophone: A Marriage of Convenience,' Chofor Che writes:

'I am one who has always viewed the ongoing relationship between France and Africa as suspicious and detrimental to the continent's growth and development. My position is fortified by a statement made in 2006 by former President of France, Nicolas Sarkozy during his presidential campaign, where he said 'France does not need Africa.' During President Sarkozy's term of office, Francophone Africans were repatriated in their numbers from France. Despite such humiliation and expulsion of Francophone Africans from France, French presence in Africa remains firm'

Che continues:
'Another area where Francophone Africa continues to suffer from the marriage with France is the imposition of the franc CFAThe structuring and composition of the central banks makes it possible for a colossal flow of finances from Africa to the French public treasury. This means that very poor countries in Africa finance Africa. There happens to be over 8000 billion of CFA from Africa stocked in France. This means over 40 million Africans are deprived of their revenue. This can be connoted as monetary slavery which is the outcome of the marriage of inconvenience between France and Francophone Africa.'

Another keen observer Antoine Roger Lokongo also notes in his 'Africa Nations Can No Longer Afford To Be France's Garden':

'France does not respect Africa. Former French President Nicolas Sarkozy went as far as insulting Africa, when in a speech in Dakar the capital of Senegal he said: 'Africa has no history' and 'the African man has not fully entered into historySome authors have seen France's traditional African policy as being equivalent to the US Monroe Doctrine. Though different in their purposes, both doctrines justify, mainly through historical and geographical arguments, the exclusive control by a nation over what they regard as their 'private backyard'(arrière-cours)This is reflected in a number of French expressions used to describe Francophone African countries, such as domaine réservé (private domaine), chasse-gardée (exclusive hunting ground), and pré-carré (natural reserve), which prescribe the backyard as being 'off limits' to other powers.

Are these situations right? If yes, then there is no point going further. But if no, then what are we as a people doing about them? And where is the moral outrage? Didn't the prescience of Nkrumah's 'Consciencism' anticipate this unequal dichotomy? Why was it that any Francophone African leaderfrom Togo's Sylvanus Olympio to Ivory Coast's Laurent Gbagbowho threatened to pull out of the CFA nexus was/is either overthrown or killed by the French with African complicity? So, you see, the analytic boomerang brings us back full circle: The political economy and utility of collective self-emancipation!

Bob Marley and Marcus Garvey, as well, foresaw this coming. Walter Rodney also saw it coming, so was Frantz Fanon. OthersGeorge Padmore, CLR James, Julius Nyerere, Amilcar Cabral, Patrice Lumumba, and WEB Du Bois all saw it coming. Now, Afrocentricity, the moral philosophy of African-centeredness, is making the same argument! As we call all see, the sad part of it all is that the political economy of African self-destruction is not merely historical; it is neither merely spasmodic as well. In fact, it has been a praxis of relational continuum between Africa and the rest of the world, particularly the West, since our initial encounter five hundred years ago.

Isn't it high time we severed the umbilical cord of unequal relational dichotomy? This was why the great Bob Marley sang: 'To divide and rule could only tear us as apartAnd I don't want my people to be tricked by mercenaries.' Why have we become so uncompromisingly inured to external chicanery and relational shenanigans? But are we really listening to the inner voice of self-emancipation, the conscience of collective self-absolution? There is even Christological affirmation or confirmation of my argument: 'And if your hand offends you, cut it off,' says Mark, one of the Synoptic authors.

Is it possible to do something about the stochastics of our relational matrix with the West? Is it possible to reorient the configuration of African psychology, of African thinking? Now, let's take a few historical steps to the progressive mindset of Antoine Roger Lokongo. He writes:

So, what sort of relationship is this, brothers and sisters? Can't we reverse the power relations where we gain some advantage, moral and politico-economic, some level-headedness? Oh Ghana! Oh Africa! Yes, Nicolas Sarkozy was right: 'Africa has no history!' and 'the African man has not fully entered into history.' Why? Because Africa has willingly turned over her historical and contemporary psychology to the brain-eating Frenchthe West? Why has Africa arrogated the power of politico-economic relations to the West? Does Eleanor Roosevelt's apothegmatic foresight: 'No one can make you feel inferior without your consent!'appeal to the African conscience? Was she serious, even right? Well, at the time she made this statement she and her husband sat on an empire that had re-enslaved Black America! Let modernism do better than that!

What does the hamstrung African Union have to give her all when the European Union picks up a third of its annual budget? How do we expect external respect when we rely on foreign aid to oil the rusted engine of our national economies? Why can't President Obama come to Africa and impose the phallic hegemony of homosexuality on straight Africa? Even Jesse Jackson fell for the hegemony of homosexual commercialism. Unsurprisingly, President John Mahama, too, also fell under the spell of Andrew Solomon, the international gay activist. And Rev. Dr. Martin Luther King, Jr.? Well, he, too, like the others just mentioned, fell under the spell of Rayard Rustin, a gay African American who introduced Dr. King to Gandhian nonviolence and was posthumously awarded the 2013 Presidential Medal of Honor by President Obama. Even Desmond Tutu has joined the caravan of the international gay parade, the new religion.

This is the fact: It is not that homosexuality necessarily negativizes the creativity, personality, or social significance of a biological being, no, far from it, but also that the political economy of phallic homosexuality has captured the national psychologies of many African countries via Western pressure. On the contrary, the West does not impose the phallic hegemony of homosexuality on Asia as it does with Africa, for instance. This is partly because of our psycho-economic prostration before the West. It's no wonder, quite predictably, that Asante's 'Afrocentricity: The Theory of Social Change,' would define, in no uncertain terms, its philosophical-moral stand in relation to the politics of phallic homosexuality in the Afrocentric Pan-African Project, which says that because of the homosexual community's uncompromising preoccupation with sexuality, therefore, it could not be placed at the forefront or center of the culture warEurocentrism versus Afrocentricity.

Moreover, at a time when our children don't have classrooms, our national preoccupation takes a long dive into the political depths of phallic homosexuality. At a time when France is getting rid of English words from French, Anglophone Africans are fighting among themselves as to who speaks English better. Why don't we deal with existential national priorities firstnational security, education, disease prevention, political stability, water shortage, the politics of genetically modified food, political and electoral reforms, building more classrooms, dealing with unemployment, providing housing to the homeless, etc?

So, what is the answer to our predicament? Antoine Roger Lokongo has the answer. He suggests:

'The way forward for Africa is to be united and to follow the South American model. South American countries are succeeding exactly because they have reached their own consensus. In the past decade, for the first time in 500 years, South America has taken successful steps to free itself from Western domination. The region has moved toward integration, and has begun to address some of the terrible internal problems of societies ruled by mostly Europeanized elites, tiny islands of extreme wealth in a sea of misery. Some nations have also rid themselves of US military bases and of IMF controls.'

We cannot conclude without a word or two from Bob Marley ('Africa Unite'):

'How good and how pleasant it would be before God and ManTo see the unification of all AfricansAs it's been said already, let it beSo, Africa unite!'

What happened to the market economy of 'compromise' and 'consensus'? Oh, where are we?