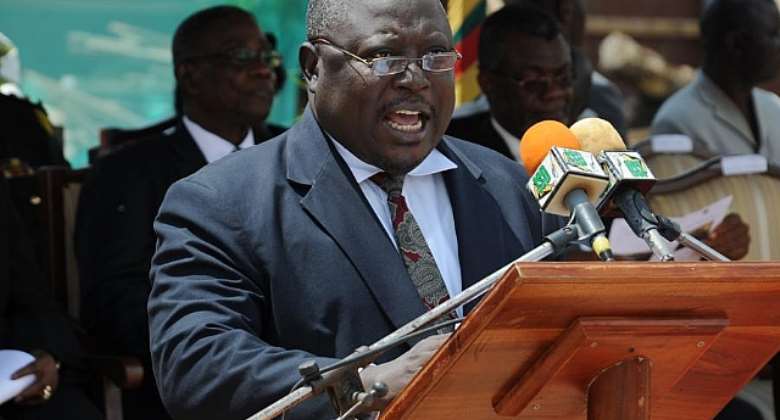 Yesterday the Supreme Court granted some of the reliefs sought by Mr. Martin Amidu in his quest to retrieve for the State some monies paid out to cronies of the government cloaked as 'judgment debts.' The Supreme Court while upholding a considerable number of the reliefs he sought, declined jurisdiction on some others, referred others to forums it thought proper and stayed on giving any opinion on the aspect about Mr. Woyome until a futuristic determination is made on that case by the High Court before which the case now is pending.

While the judgment given yesterday was generally good, I would respectfully submit that the august Court gave the judgment per incuriam having missed the very important point Mr. Amidu sought to make. It is my view that even though this per incuriam decision is not fatal to the cause of Mr. Amidu, and though to many, Mr. Amidu was successful, he failed to obtain his goal which was to get the Supreme Court to leave from some of their time long principles particularly those on suits brought under Article 2(1) of the 1992 Constitution.

It is settled learning that Article 2(1) of the 1992 constitution provides a general ground for a person who believes that the constitution or parts of it has been breached by the acts of omission and commission of another, or any enactment purporting to have been made under the authority of the Constitution or an action carried under an enactment is in breach of the Constitution to go ahead to the Supreme Court to seek for remedy of the situation.

A plain reading of Article 2(1) suggests that a person who believes that an act, omission or enactment is unconstitutional can go ahead to the Supreme Court for enforcement orders or for interpretation of the relevant aspects of the constitution; however that is not the case. The authorities are settled on the requirements a person must meet before a suit brought under Article 2(1) of the constitution would be entertained. These requirements are borne out of time long principles which the Supreme Court has set. If the observations of Afreh JSC In Re Tsikata(No 2) is anything to go by, then these principles actually are older than the constitution itself. I would however on the authorities restrict myself to cases determined under the current constitution which lay(s) one of the many principles guiding suits brought under Article 2(1), 1992.

Bilson v Attorney General [1993-1994] 1 GLR 104 gave birth to the principle that suit brought under Article 2(1) must contain a real case of controversy or dispute, and not merely ask the Supreme Court enter into an academic adventure. There must be some real cause of action so that the determinations made by the Court would not be made in a vacuüm.

In New Patriotic Party v National Democratic Congress[2000] SCGLR 461, the Supreme Court by a majority of 3-2 decision, held that the act or omission complained of as being in breach of the Constitution ought to have happened and not be a mere declaration of intent.

That position appeared to have been vacated by the unanimous decision of the Supreme Court in the National Democratic Congress v Electoral Commission of Ghana [2001-2002] 954 where the Court dismissed the plaintiff' suit for lack of evidence and not the absence of locus standi even though the defendants in that suit had merely communicated an intent.

Be it as it may, clarity of the Supreme Courts position can be found in Amidu v President Kufour,[2001-2002]SCGLR 86, where the majority of the Court held that the act or omission complained of, must not just a statutory provision but must indeed violate a specific provision of the Constitution. My understanding being that to have qualified under this ground, the act or omission complained about ought to have taken place thereby making intents not actionable under Article 2(1).

In Attorney General (No 2) v Tsikata(No 2),[2001-2001] SCGLR 620,specially at page 698, per Afreh JSC, as he was then, the Supreme Court reaffirmed her earlier position not to entertain suits cloaked as though it were for interpretation and/or enforcement when in real sense other remedy laid available per specific provisions of the constitution.

In the estimation of Afreh JSC, as he was then, that was a fundamental principle that the Supreme Court had for over a period of 30 years abide by and which, when breached should result in a dismissal of the suit so brought in limine.

And finally mention must be made of Yeboah v JH Mensah, [1998-99] SCGLR 492 where the majority of the Supreme Court held that actions brought under Article 2(1) were not time bound.

I do concede that these principles are good for the purpose for which they were established, what I would disagree with is the use of these principles to frustrate attempts by persons such as Martin Amidu to protect and promote the public interest. For in my view, the legitimacy of the constitution is structured on the true warranted belief that it promotes public interest and public good.

Mr. Martin Amidu being Ghana's longest serving Deputy Attorney-General and after Attorney-General and being a party to some of the cases that established these principles was clearly aware of the position of the law on his suit, especially on those aspects that bothered on jurisdiction. What in my humble view he sought to do, however, was to invite the Supreme Court to leave their earlier positions especially on matters of jurisdiction and to assume its proper authority of asserting control over events in lower courts when it is demonstrated that Justice would not be served and the national interest would not be protected.

It is my suggestion that had the Justices of the Supreme Court properly directed their minds to the facts surrounding the Woyome, Waterville and Austro-Invest case, their decision, particularly with regards to the Attorney- General would have been different.

There clearly isn't any basis to trust that the Attorney-General as a person, or her office as an institution, intend to recover the monies illegitimately paid out to Woyome. It should be noted that as a department, the Attorney-General's, had all the documents, at all material times, that proved beyond all doubt that Mr. Woyome had no basis for the claims that he was making, yet, that same department went ahead to issue orders and instructions, and even a purported consent judgment with Mr. Woyome, entitling him to the payment of those monies.

As a person, Ms. Brew, the Attorney-General, is a member of the law firm that led, against all ethics and indeed against the laws of Ghana, a defunct company called Austro-Invest to make the claims they made against Ghana.

She, is indeed, neck-deep in the allegations of impropriety leveled against the law firm of which she is a senior partner. Again, the Court ought to have taken judicial notice of the statements made by the former Deputy Attorney General, the current Deputy Attorney General and the pronouncements of frustration by the trial judge Ajeet-Nasem over the inability of the State to continue timeously with the prosecution of this case.

Even though specific remedy, constitutional and statute wise, did seem available to Mr. Amidu, consideration should have been made of the obvious truth that those in whose hands these powers are, are themselves so implicated in the scandal as to not to use it or intend using. Mr. Amidu's quest was to bypass Articles 88(3) and 88(5) to do what the Attorney-General, had clearly failed to do. Sad to say the Supreme Court declined the invitation preferring to stick to their iron-cast modus operandi with regards to Article 2(1).

The greatest danger is that when an Attorney-General fails to properly discharge his or her duty even when such a failure is so clear and deducible on the facts alone, that any move by any person to correct the situation at the Supreme Court, would not be entertained unless there is a clear need for interpretation or enforcement.

I think most respectfully that the highest Court of the land, while they were commendable yesterday in taking notice of the great patriotism of Mr. Amidu ought to have gone further by making pronouncements on the Woyome aspect of the suit regardless of the case pending before a High Court. Where it is clearly demonstrated that the public interest is at stake, the Supreme Court, ought to in my humble view, not to be distracted in the handling of justice by mere technicalities and legal doctrines.

The Supreme Court ought to take note and properly direct itself in future on how it intends to handle issues like the one brought before it by Mr. Martin Amidu. Respectfully submited.

Our SinoHydro road projects has silence NDC, when we talk th...
12 minutes ago

Let's go on our knees and pray for Akufo-Addo for God's inte...
39 minutes ago