Second Lady’s Call For Radical Approach To Librarianship Must Be Welcome News! 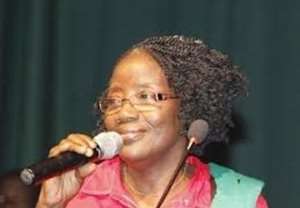 The World Bank reports that recovery from the global financial crisis remains fragile. Persistent risks include high unemployment, low growth in developed countries and budget constraints felt in many institutions including library institutions across the world (http://www.worldbank.org/financialcrisis/).

Surely, there is no gainsaying about the negative consequences of the financial meltdown on library institutions other than the bleak, not too good look for the future. Some libraries have had to cut on hiring, while services have been reduced to the chagrin of patrons and students alike.

Now, while this gloomy picture pertains more to libraries in countries hardest hit by the financial recession, some countries still have much work to do to build libraries that are well equipped and adequately resourced for patrons to reap the benefits of library services. In fact, many questions are raised as to library development and services in Ghana: Apart from the moderately equipped academic and special libraries, do we have a national library at all?

Are the regional and district libraries all over the country well equipped and resourced for learning? Do we encourage communities to build their own libraries and use them? Finally, do librarians receive the desired training to reflect the ever changing face of the library profession?

These are questions worth responding to, if we are to heed the call from the Second Lady, Mrs Matilda Nana Manye Amissah-Arthur for the adoption of a radical approach to the 'management of knowledge' and a re-thinking of librarianship to keep the profession going.

The Second Lady could not have missed the point on this, when she posited that the advent of the Internet, access to information, the knowledge economy and knowledge facilitation had gained a new meaning altogether, and librarians had to take another look at the way the library managed knowledge.

The good news unfolding from this assertion is that the Second Lady is a professional librarian, and on a second measure, she is much invested and has the propensity to initiate the transformation for libraries that has long been overdue in the country.

The traditional concept of library and librarian is being redefined in recent times. As libraries change from passive learning environments to active ones, the role of librarians has to change as well. Librarians should be able to venture into collaborations in restructuring their role. In order to succeed and flourish in the non-traditional environment, librarians must be able to embrace the fluid landscape and nature of information work.

This will require the adoption of new perceptions, attitudes, beliefs, and the willingness to proactively sell the organizational, research, and evaluative expertise that belongs to practitioners of library and information science. In order for librarians to carve this new image and niche for themselves, new libraries have to be built, whiles the old ones rehabilitated and resuscitated to befit the new environment that librarians would prefer to work in the information age.

But, honestly speaking, other than librarians working in few academic and special libraries, what use does it make for a librarian to be dealing with some old dusty books on some shelves somewhere in the corner of the country, to say the least, without electricity? This is when and where the role of libraries becomes compromised and hence the nation loses.

Libraries are supposed to offer a structured learning environment for both recreation and research and offer programs designed to meet the specific information needs of the community. Given this role, there is an urgent need for government to consider building more library structures and to create awareness in library use and help revive the reading culture in the country as per the Second Lady's observation. Yes, this is the way to go, intoned the Second Lady, and the earlier we get started about this, the better we are disposed of to reap the benefits of library services.

It is difficult to disagree with the former British Prime Minister Gordon Brown on one of his visit to Mozambique in 2006, when he said that, 'it is one of the world's greatest scandals that today two-thirds of Africa's children never complete a primary education (and are) denied one of the most basic rights of all, the right to an education. Yet children and young people going to school at all levels, including university, require good reading and library material.'

Seven years down the lane, do we have any good news to report about? To contextualize this further, some high school graduates have dropped out and have been unable to attend college as a result of a failure in core subjects such as English.

I do not have statistics to prove the number of school drop outs at all level from Elementary School to Junior High School (JHS), from JHS to Senior High School (SHS) and from SHS to the University, but suffice it to say how English has been a stumbling block to many students as a result of inadequate or non-existant literacy programs in communities, in libraries and in schools.

The challenges facing the Ghana Library Authority must be addressed immediately. Among those challenges catalogued accordingly are inadequate release of funds, lack of IT infrastructure, under resourced libraries and delay in the implementation of interventions.

(http://www.presidency.gov.gh/press-centre/general-news/second-lady-calls-radical-approach-library-services). It should be a no-contest-idea for government to build and equip libraries and encourage communities and other stakeholders like non-governmental organizations (NGO) to partner with government in building more libraries in communities. Times are changing.

There is a move towards digital distribution of information through the global network infrastructure and Ghanaians should not be left behind in this move! Libraries must be seen as enablers for us to survive in this digital environment.

Of Former President's Son to President?
Ghana Elections 2012: Defeat versus Victory
A Test of Our Democracy: How Far Ghana can?