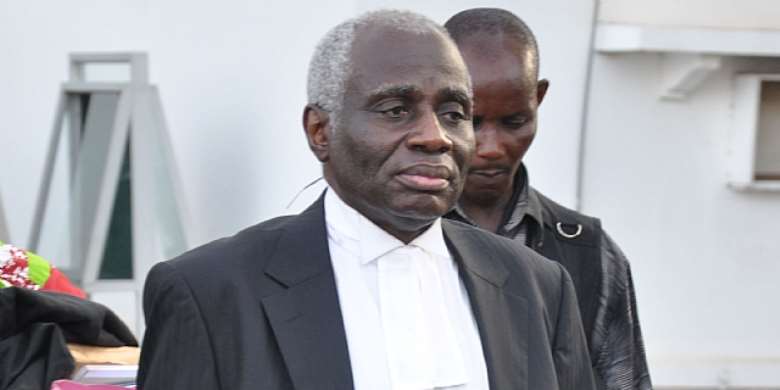 Mr. Tsikata's response to the NPP's petition after he was served a copy of it was that the petition was legally pathetic; it was poor in logic and poorer in arithmetic. After so many days of cross-examining Dr. Bawumia, all objective Ghanaians would agree that it is Mr. Tsikata who has shown a sense of poor logic. He has indeed confessed severally to being 'arithmetically challenged' and has been so legally pathetic that the Bench on more than usual occasions have had cause to caution him on his conduct and appreciation of the laws at play. After failing to turn the courthouse into an arena of insults where he would have been comfortable displaying his skills, Mr. Tsikata, in his frustration has resolved to his usual delay tactics and injudicious queries which seem to point in the direction of whether or not a polling agent by signing a pink sheet legitimizes an election no matter what went on there.

What maybe Mr. Tsikata cannot get is that in Apaloo v Electoral Commission of Ghana (Supreme Court), decided on the 17th of January 2001 at pages 253-259 of the Supreme Court of Ghana Law Reports, their own Justices including Kpegah and Bamford-Addo rightly put into context the role of party polling agents in an election. In that case, the Electoral Commission per a Gazette Notice published on 27 November 2000 sought to inter alia delegate its powers of checking and verifying prospective voters to 'all the candidate's agents'. The plaintive, sued the EC for reliefs which included a declaration that the attempt by the EC to give the candidate's agents a say in identifying a voter at the polling station was in breach of articles 42 and 51 of the 1992 Constitution. The Supreme Court held, unanimously granting the declaration sought for the reasons some of which I proceed to quote.

'Per Curiam: (2) Since regulations 30 and 31 of the Public Elections Regulations,

1996 (CI 15), gave power to check and verify the identity of prospective voters to officers of the Electoral Commission, ie presiding officers or polling assistants and not to the candidate's agents, the directives in the Gazette Notice of 27 November 2000, which had given that power to all the candidates' agents, was ultra vires the said regulations and so null and void.

Per Bamford-Addo JSC: [W]hereas the 1992 Constitution has been designed to make the defendant completely independent in the performance of its duties and functions, the directives of the commission amounted to a delegation of its duties; it would, if permitted to be effective, be contrary to the mischief sought to be prevented by the Constitution, namely, to empower the commission to act in a non-partisan and fair manner in the discharge of its functions. The directives are contrary to both the letter and spirit of the Constitution and contravene articles 42, 51, 46, 21(3) and 55(2) thereof and are therefore null and void.

Per Ampiah JSC. [W]here power is given to a person to perform a particular duty, such power shall not be delegated without due process of law. The maxim is, delegatus non potest delegare (A delegated power cannot be delegated.) The manner by which a voter may be identified and allowed to vote, is set down clearly in regulation 30 of CI 15. It is not the business of all the candidates' agents... to 'affirm that they know the person' before he or she is allowed to go through with the voting steps.

Per Atuguba JSC. The ascertainment of the identity of a prospective voter is part of the conduct of public elections and as the Constitution places that duty on the Electoral Commission, it can only do so by itself and its proper agents... To surrender the judgment of the presiding officer as to the identity of a voter to the candidate's polling agents, is in effect, to delegate that function to those agents, contrary to articles 45(c) and 46 of the Constitution.

It is clearly deducible from a simple reading of the above that Mr. Tsikata's strange elevation of polling agents is unknown to any law and in direct contradiction to the known position of law on the same as stated by the Supreme Court in the above mentioned case.'

Beside Mr. Tsikata,Lawyer James Quashie-Idun has also sought to create the impression that a presiding officer has no powers to annul the results of an election. That is indeed legal ingenuity at its apogee. One would have thought that the learned counsel for the EC would have left such poor thinking to the likes of Tsikata. Most certainly if the presiding officer is a proper delegate of the EC, then the presiding officer can take decisions in the name of the EC. To the extent that those decisions are not unreasonable or against his general mandate they cannot be impugned on grounds that he did not seek superior authority before taking them. The duty of a presiding officer goes beyond just ensuring that the polls were peaceful, it includes ensuring that the polls were credible. Therefore, if the Presiding Officer feels that the election was not credible in a place where he presided, and if his appointing authority is on record as giving directions on how to remedy situations like that, he can and indeed should adopt those remedies. To that extent, it is unnecessary for a presiding officer to seek for the authorization of his superiors in cancelling the results of a polling station where there was over-voting.

The truth is the Respondents; try as they may, simply cannot clothe the party polling agents with the powers they want to. I doubt if even parliament can without offending the spirit and letter of articles 45(c) and 46 of the Constitution. They cannot rationalize the palpably outrageous manner in which the results were declared and the polls were conducted by citing the fact that to err is human. They cannot rely on the deliberate and wilful disregard of the laws that regulated the conduct of the elections on grounds that some persons, who had taken no practical steps to secure their right to vote, were going to be disenfranchised. So far, their responses have been 'legally pathetic, poor in logic and even much poorer in arithmetic'.