Of Former President’s Son To President? 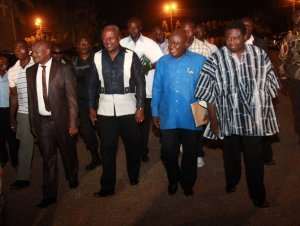 Ghana 2012 Elections have long been over than a winner declared, results gazetted, president inaugurated, while a legal tussle hangs in the balance to be decided by the Supreme Court. But, what went on in Ghana during the presidential and parliamentary campaigns was full of drama; amongst which presidential debates organized for the presidential candidates of the contesting political parties to prove their mettle, why they deserve the mandate of Ghanaians to be President of the Republic of Ghana.

The debates availed electorates the opportunity to measure the candidates in terms of their vision for the nation, their wisdom, their reasoning capacity, their communication and presentation skills, their demeanor and composure, and most importantly the coherent and cohesive way they would articulate as head of state of this beautiful country, Ghana.

The Institute of Economic Affairs (IEA) must be commended for doing this. I am convinced that the next debates to be organized in the future would be informed by the lessons learnt, would fine-tune procedures, adopt best practices and would treat our future presidents with respect, and deservedly so. What about the sign language expert?

I observed that while he would be in sync with the candidates for a while, there were sometimes break on his part while the candidates spoke. Unless the expert's break in rendering the intended communication from these candidates was part of the sign language communication strategy, less it must have been a wonderful experience for him to endure! (Review the videos).

At anyway rate, some of the contesting candidates did well in the debates given the stakes involved in the last election. I was particularly impressed by the performance of the Convention Peoples Party (CPP's) candidate, Dr Abu Sakara. He seemed to have a grasp of the issues and communicated very well.

On the other hand, Mr Hassan Ayariga of the Peoples National Convention (PNC) Party was present to “ayarigate''. It was fun to have to watch him do that and to hear him display gross dearth of knowledge on a wide range of issues.

Nevertheless, Mr. Ayariga appeared to be a “numbers man”, a data personality, taking a cue from his educational background. The other candidates did not have to ayarigate at all, but rather seized the opportunity, got down to business and the results have been there for all to see.

Of paramount interest about the last election is/was the way our democratic credentials have been touted again and again by all. The moment is ours now, and we feel proud as Ghanaians given the respect accorded Ghana internationally.

So, what are the differences? The Merriam Webster dictionary defines a parliamentary system of government as one having the real executive power vested in a cabinet composed of members of the legislature who are individually and collectively responsible to the legislature (http://www.merriam-webster.com/dictionary/parliamentary).

A President's duties as head of state include tasks such as making speeches, representing the country at public events, hosting or visiting diplomats from other countries, and presenting prestigious national awards. (http://www.wisegeek.com/what-is-the-difference-between-a-parliamentary-and-presidential-system-of-government.htm)

Now, why the talk about presidential and parliamentary systems of government? I have read and made to understand that Hon. Nana Akufo-Addo is referred to as a former president's son and rightfully so. People must get this right; his father as president by definition of the parliamentary system of government we operated at that time was a ceremonial head, hence was a titular president. Actually, it would be the Prime Minister who called the shots. People need to understand that a ceremonial head was not elected but was appointed /handpicked by the Prime Minister.

Dr. Abrefa Busia would have selected and or appointed him perhaps to balance some political stakes during the period. Therefore, any of the offspring of the late ceremonial head, Mr. Edward Akufo-Addo will be right to use daddy's ceremonial position to shore up credentials, but with circumspection as not to create any unwanted scenario and or confusion arising from the use of daddy's titular head position.

Do we (Ghanaians) consider using that as a flagstaff for political purposes or expediency misplaced? I don't know. What I do know is for people to understand the different concepts and make their own judgment about politicians.

Ya-Na commiserates with Mahama
14 minutes ago