Can We Find A Place For Gays In Our Society? 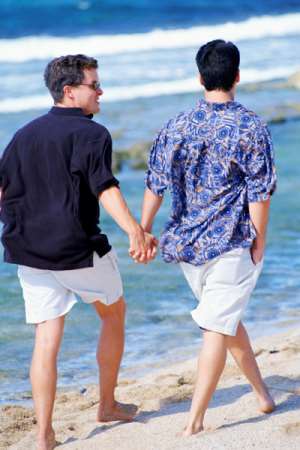 Here in Ghana, it is a taboo to have sex through the anus except the vagina. In fact most religious orientations are quick to spew the consequences one is likely to suffer.

Even though our morals and values intertwine, Africa as a whole abhors the act. But the phenomenon of gay rights though not new in the west is on the increase in Africa. Recent developments regarding homosexuality in Africa could be likened to the Arab Spring within the Middle East.

Ghana's 1992 constitution though obvious with regard to the fundamental human rights of Ghanaians, it is at conflict with the criminal code which is unequivocal on the illegality of having unnatural carnal knowledge of someone. The lacuna in the constitution is that the constitution itself is silent on what constitute being gay.

Homosexuality is defined as the sexual attraction a person has for another person of the same gender. This includes lesbians.

To be gay depending on what lens one wear could be morally wrong or a medical defect. Many moralists argue it's against God's purpose for procreation while doctors simply believe it's a medical defect. Be it the later then I believe it should be corrected. What at all would make ones hormones arise upon seeing the nakedness of a fellow man and not to talk about not having seen the man's nakedness but his mere appearance? Indeed gays might be suffering from something serious that mere rhetoric and debates might not solve.

We are where we are as a result of the fact that western civilization has eating into our society without us questioning its logic. The Ghanaian I know is always adjusting to new trends from the west be it new form of dressing, eating, speaking and now having sex. When we begin to eat anything that we are fed with without shaking our head to signal dejection then we are stupid.

Man as created by God is a little lower than the angels says the good book but far above animals don't you think so? Knowing that this is sin yet legalizing it is in itself sin but when the norm is circumvented to become bad is equally a sin.

No one can circumvent the order of nature to suit modern idiocy. In as much as I believe the debate on whether or not homosexuality is legal in Ghana or not, it is legitimate we do not as a country go about that devoid of common sense. Yes, let people stand up for what they believe in whether moral or legal let us allow common sense to prevail.

Whether we like it or not the “new” phenomena of sexual attraction in Africa and for that matter Ghana has come to stay and the question of finding a place for them in our mist is very crucial.

For me, this is the appropriate time to discuss the issue of gay right (even though I believe they have only left) once and for all. We should not only pretend to concern ourselves with the implication of gay right on our society at the least provocation of the subject.

Let no one think that creating a new ministry that encompasses social protection of which gays are part and approving a minister whose training is in defending “Human Rights” would bring the curtain down on the matter, rather the policy direction of the ministry is as important as the people who drive the ministry.

To sit and allow others who are unrepentant of the subject matter to think as a nation we are indecisive and double minded is unacceptable. One such person is the infamous Andrew Solomon who believes the John Mahama led administration has double standards on the issue of gays.

Interestingly enough, there is no need to wait on our parliamentarians to lead the debate because it's not about improving their economic fortunes. Perhaps they might have forgotten that being gay or being straight is equally about the lives of the very people they pretend to be serving.