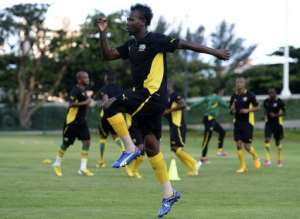 JOHANNESBURG (AFP) - Mali plan to play party-poopers in the quarter-finals for the second consecutive Africa Cup of Nations when they confront hosts South Africa Saturday before a sell-out 60,000 Durban crowd.

A year ago almost to the day, giant striker Cheick Tidiane Diabate levelled with six minutes left to force co-hosts Gabon into extra time and a penalty shootout, won by the Malian Eagles.

South Africa, like Gabon, are favourites, despite the best efforts of coach Gordon Igesund to convince the media otherwise ahead of the only last-eight fixture that is not an all-west Africa affair.

Mali defeated South Africa 2-0 at the last-eight stage when they hosted the African football showcase 11 years ago and have won all four quarter-finals, three in regular time and one via a shootout.

That South African loss in the heart of west Africa marked the end of a great run by Bafana Bafana (The Boys) that brought gold at home in 1996, silver in Burkina Faso two years later and bronze in Ghana at the 2000 tournament.

South Africa have not passed the first round at the Cup of Nations since while Mali continue to punch above their weight, finishing third last year behind shock winners Zambia and runners-up Ivory Coast.

Home advantage, passionate support and several superb goals from unlikely sources have raised hopes that South Africa can match the team of 1996 and lift the trophy, although central defensive weaknesses are a concern.

But a Mali team desperate to bring a joyful diversion to a country battling Islamist militants are unlikely to be a pushover, especially with the cultured left boot of former Barcelona 'super sub' Seydou Keita in midfield.

Igesund, hoping to win the Cup of Nations just six months after inheriting the hot seat from axed Pitso Mosimane, is warier of the Malians than many supporters, who believe a home victory is inevitable.

"Mali are a talented team with very good players. They play differently from the other sides we have met so far. They like to slow things down, they like to knock the ball around.

"The Malians are all big boys. I watched them draw against the Democratic Republic of Congo and all 11 are tall. We have to use the ball well, keep it on the ground, get behind them," stressed silver-haired Igesund.

Mali coach and former Sunderland full-back Patrice Carteron wants to follow in the footsteps of another young Frenchman Herve Renard, who guided Zambia to glory last year against massive odds.

"Everyone expects South Africa to reach the semi-finals. We have nothing to lose and will try to upset the home team. Malians back home have not had much to cheer about apart from the Cup of Nations and we will be playing for them."

Malian forces backed by troops from France and other African countries in the region have been successfully pushing back the Islamist extremists, who were just a few hundred kilometres from capital city Bamako a month ago.

South Africa recovered from a woeful performance when held 0-0 by Cape Verde in the tournament opener to comfortably beat Angola 2-0 and come back twice to draw 2-2 with Morocco in one of the best matches so far at this Africa Cup.

Both Bafana Bafana goals against the Moroccans were outstanding as midfielder May Mahlangu and centre-back Siyabonga Sangweni curled shots past Nadir Lamyaghri, one of the best goalkeepers on the continent.

As was the case a year ago, Mali did not impress in the group phase, taking 84 minutes to beat Niger, were lucky to lose only 1-0 to Ghana, and recovered from a sloppy start that cost a goal to draw 1-1 with DR Congo.

The winners stay in the Indian Ocean city to prepare for a February 6 semi-final against title favourites Ivory Coast or Nigeria, who clash in Rustenburg Sunday.