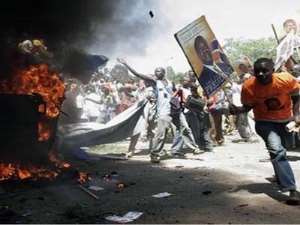 Democratization has soared on the continent of Africa. Democracy has been embraced by all and sundry. Democracy has given the power to rule to the people. A fundamental bed rock of democracy is the election of political leaders through the electoral box.

Electoral process gives the citizenry the sole right to elect their preferred political leaders. As if this is not enough, electoral process in Africa have most often been characterized by violence at various stages, from pre-election, during elections and post elections. This electoral process which give rights to the people to govern themselves is been challenged by the threats to security, peace and development.

Electoral violence in an African election can be seen manifested in various forms as physical assaults, arson (the illegal use of fire to destroy a house, building or property), snatching of ballot boxes and murder. Can Africa boast of a stable democracy for ones? One might be quick to ask; what are the factors that might instigate all these electoral violence?

Electoral violence is not been met with strong criminal codes in Africa. Weak penalties or punishment for violators of electoral process also give room for more crimes to be committed. Penalties or punishment are intended to achieve correction, retribution and deterrence. Most countries in Africa lack legislation against perpetrators of certain electoral offences. This poses African election to all forms of crimes and violence.

Weak governance and corruption can also instigate electoral violence. Corruption can set the stage for structural violence. Weak governance and corruption make people feel desperate enough to seek any means of revenge against political authority including violence. Small arms proliferations in African countries are on the increase. Possession of arms leads to the perpetuation of violent conflict and the creation of new cycles of violence and crime.

WHAT HAPPENS IF MEASURES ARE NOT ADAPTED TO COMBAT ELECTORAL VIOLENCE?

Electoral violence is associated with a huge cost. A cost which must be paid by member states and Africa as whole.

Electoral violence leads to political instability. Electoral violence is both the causative and symptomatic in Africa. It is the causative because it feeds the political crises that manifest regularly. Political violence is a threat to building a strong, efficient and visible democratic Africa. It leads to anti-human acts as basic human rights, issues of gender equality; cultural rights and identities are often either ignored or trampled upon. These adversely affect the human security and social development of Africa.

Electoral violence breeds insecurity as it is often characterized by loss of life's and properties. It forms the catalyst for human and property insecurity. Over millions of people are killed; billions of people displaced and properties worth billions have been burnt, looted and destroyed. Where will all these lead us to as a continent? Aside leading to political, social and economic insecurity, there are attendant costs of ensuring security, repairs of damaged infrastructure. These resources could have been put into an alternative use to better human and social development.

It is very pathetic to observe in dismay that development cannot occur in the absence of peace and security due to electoral violence, yet day in and day out, we witness them across the continent. Africa suffers from an atmosphere of insecurity and political instability. Electoral violence drives away prospective foreign investors due to the lack of adequate security for their investments. Private domestic investors will also lose confidence in their respective countries and opt for foreign investment.

Electoral violence leaves so many people across the streets of Africa homeless. No place to lay their head and lack of access to food and portable drinking water.

Electoral violence renders some Africans orphans; some become physically handicapped; hunger and death are the least. At least, this should not be the portion of the black African. There must surely be a change in the trend of our electoral processes as a continent.

THE WAY FORWARD
What then should be done to avert the actions and inactions of perpetrators causing electoral violence in our region? Africa has been harmed enough through this electoral violence. It is time we as Africans exercise some level of integrity in our electoral process.

The problems of poverty, unemployment and underemployment could be addressed by pragmatic steps by governments towards national economic stability.

There is a need for capacity building for the police force and other security agencies in the areas of small arms proliferation to enable effective performance of their duties.

There must be some level of co-operation between the police service and the other security agencies. The electoral body which is the electoral commission (EC) must be well equipped and resourced with both human and physical capital. Electoral officers must be well trained and motivated. The security sector must educate the public on the consequences of violating the electoral laws.

Moreover, there must be some level of electoral reforms and good governance. The underlying problem of political instability in our society is the lack of good governance.

Hence to resolve political violence, accountability, social justice, transparency, rule of law, gender equality and due process must guide governance and leadership in Africa. Electoral reforms must include other things as mass education. There must be some level of education for the citizenry to know who is a registered and considered as an eligible voter under the laws of the land.

When these measures are well instigated, integrated and adhered to, Africa will be freed and void of any electoral violence.

The point must be made that despite the challenges that emanates from the practice of democracy, it is far better than any other form of governance that Africa can think of.