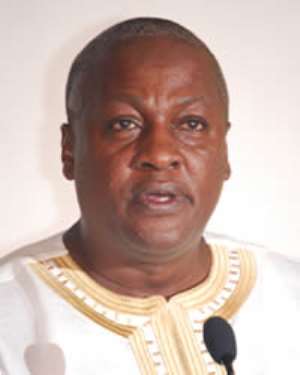 We are indeed in an interesting time, where interesting things are happening, with an interesting personality as President. Unfortunate for us Ghanaians, we have a President who on the surface of it appears to be a fine gentleman, but, within, finds himself in the league of leaders like Nigeria's Sani Abacha, Zimbabwe's Mobutu Seseko, Egypt's Hosni Mubarak et al. These were all Former Head of States of their respective countries who were not only known for their despots and power drunkenness, but their insatiable quest for wealth, and un-imaginary corrupt dealings through overt and covert means.

Since it is a reality and an established phenomenon that corruption is or has been the iniquity that has stagnated growth and meaningful development in many endowed countries; it is imperative, we interrogate those who seek to lead us as a nation- their track record, incorruptibility and their ability to fight corruption with vigor to an achievable barest minimum.

But, before I delve into the main substance of this piece, I would like to emphasize that, any country that wins the war against corruption, has half way placed its people on the road to prosperity. It is therefore crucial for us not to cringe on exposing corrupt leadership and substituting them with those who can live up to our expectation by waging and winning the war against corruption.

President John Dramani Mahama who after becoming President of our Republic through a rather fascinating circumstance; in his own words, said the late President Mills, gave him the steering wheel and all opportunity to drive the affairs of this country at the time he served under him as his Vice-President for reasons which were obvious to all. The question now is, was his stewardship then and now beneficial or in contrast to the collective interest of the Ghanaian populace? Could he pass the litmus test? The ensuing paragraphs and series of this my article shall expose the sheep in a wolf's clothing.

Indeed, this was a man who spearheaded many multilateral and bilateral deals on behalf of government, but, regrettably, he did so with his interest supplanting that of the state. From one deal to the other, he could not wane himself from the stench of corruption, as he was deeply involved, and it stinks all over him. He emerges as an utterly corrupt opportunist who is so determined to rip off the nation at any given time.

The Armajaro Scandal, during which period he was the Vice-President, he personally aided in the restoration of their operating license which was hitherto seized by COCOBOD. It was factually accurate that Armajaro Company ltd which dealt in the trade of cocoa was largely involved in the smuggling of cocoa beans across the countries boarders which visited great loss to the nation. During one of his visits to the UK, the Foreign Affairs Minister- Henry Bellingham met and lobbied him on behalf of Armajaro Company Ltd. President Mahama then assured them of his fervor to look into the matter once he touches base.

To the surprise of many, upon his return back home, their operating license was immediately restored. Clearly, President Mahama by this his singular act of perfidy, sided with Armajaro against the good people of Ghana to continue their exploit in amassing illegal wealth at the detriment of Ghanaians and rendering useless the efforts of COCOBOD officers who were bent on cracking the whip against companies and individuals engaged in dubious ventures at the expense of the state.

When pressure was mounted on his involvement in this scandal, and his integrity brought into question, he vehemently denied and stated that he only asked them to petition the appropriate authorities- this was though expected. Unfortunately, COCOBOD had to back-track their earlier stance to save the face of the President. This occurrence exposes the weakness within our state institutions and how they allow themselves to be manipulated by the powers that be.

President Mahama cannot be discussed without mentioning the infamous STX housing deal which indeed was the most outrageous and corrupt deal ever in the history of our Republic. Under that deal, Ghana signed up to a staggering and preposterous loan agreement at the tune of $10billion to facilitate the project.

Out of that agreement, Ghanaians were to be short-changed by the construction of 30,000 units of houses for the security agencies at the cost of $1.5 billion with most of them being a single-bedroom apartment; though GRIDCO had earlier indicated their ability to build that same unit of houses at a very minimal cost with an improved technology.

As if that was not enough, a whopping $245million was paid to the Korean partners as “Political Risk Insurance”; after granting them a Sovereign guarantee. If this is not a grand fleece to oil the pocket of some greedy few, then tell me what corruption is.

President John Dramani Mahama's lust for wealth and desire to build a 'financial empire' continues unabated with dubious transactions popping-up through him and his cartel each passing day. Somewhere this year, He brokered another shady deal on behalf of government to purchase a luxurious customized Embraer 190 Presidential jet under the epithets of a “Strategic Airlift Aircraft” for the Ghana Armed Forces.

In the said transaction, President Mahama and his delegation agreed to pay a basic price of $55,264,000 for the airplane despite the fact that the airline company's price quote was between $28.5 million-$40 million. The airplane was also optioned for a first-class configuration bringing its price to an inflated totality of $88million.

The configuration of the airplane included an extra fuel tank costing $8 million; air staircase costing $1 million and in-flight entertainment of $1.4 million. It is however ridiculous to think that $17million was earmarked to build a hangar to house the airplane. This is fleecing with audacity- 'e dey be keke' indeed!

Arguably, President John Dramani Mahama is the most corrupt leader throughout our history, defying the democratic principles of Probity and accountability on which he rode to power.

The litany of corrupt dealings being championed by him is so frightening that, it can bring the nation down on its knees. The job of a President is a very important one that cannot be entrusted into the hands of an over-ambitious man in pursuit of earthly pleasures. Ghana needs a new leadership that can bring dignity to the Presidency and re-direct its focus to meet the aspirations of the teaming masses.

In the second chapter of this piece, I shall among others expose in detail how President John Mahama through his brother's company had folded-up some banks due to their excessive borrowing and the use of some state intuitions to defray their cost.