The African Breadfruit Revolution has begun! And it began in Ghana! 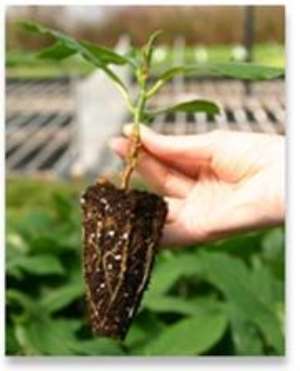 The Ghana Alliance against Hunger and Malnutrition (HAG) announced to Samoan and Fijian news agencies October, 2011 that 870 Samoan variety breadfruit trees, each about 250 mm tall, had arrived to Ghana from a mass propagation facility outside of Frankfurt, Germany.

Not since the decades after the mutiny on the Bounty has such a large shipment of the Pacific Islands breadfruit arrived to Africa.

HAG made no announcement in Ghana about the project or to where the little trees went for nursery care - the Bunso Agricultural Research Station near Kade - as it was meant to be a bit of a secret until the little trees grew up to field planting size. From the research station they were committed to farmstead and community plantings in the Bunso area and at a site outside of Somanya (near Koforidua). These field plantings occurred upon the late onset of daily rains from about the first week of May. The area from Bunso to Somanya is being targeted by HAG for development as a breadfruit producing and processing region. Potting the starter trees upon their delivery to Bunso 14 Oct. 2011
Global Breadfruit photo The trees are of the Ma'afala and Ulu Fiti varieties of Samoa in the Pacific Islands which produce up to 500 kg of fruit per tree per year and, in Samoa, have complementary fruiting seasons resulting in shorter hungry months. The present Ghanaian breadfruit produces perhaps 250 or 300 kg per year.

Nana Ayim Poakwah, the HAG executive director, related that he had met America's Breadfruit Institute director, Diane Ragone, some years ago and left his contact details with her because she was predicting the 'seedling' mass production phase would soon become a reality. In the summer of 2010, Ragone contacted Poakwah with word that those mass propagation methods were working out nicely and that Jeff Marck, a Breadfruit Institute volunteer would be in touch. The Breadfruit Institute especially wanted to gauge enthusiasm in Ghana because of the particular history of Ghana during the drought of 1983 when breadfruit kept producing at a time when other crops failed and many other species of trees died in large numbers. And, indeed, there has been great enthusiasm. Marck, an African rural economies and population health specialist, then began working with Poakwah who had been developing breadfruit arrival plans for several years.


Poakwah's idea was to establish demonstration plantings around homesteads, schools and municipal buildings, on farms and on wasted or rough ground as breadfruit is an excellent tree for regenerating ecoforests.

You can have your ecoforest and eat it, too!

No other tree holds the promise of carbohydrate security that breadfruit does.

An entire shipment from 2009 was reported to be thriving in the care of the Jamaican Ministry of Agriculture where previous shipments around the Caribbean did not land in the hands of master horticulturalists. The Jamaican model was the only one which produced such high survival rates for the newly arrived plantlets. So the first such plants to arrive to Ghana went to the Bunso research station for some months of professional nursery care before going off to their farm and community field plantings in May.

HAG is a Ghana NGO whose executive director Mr Poakwah was Operations Manager of the Ghana School Feeding Programme during its early years and has been instrumental in other happy Ghanaian farmer and community development stories. HAG keeps closely abreast of the Jamaica successes and failures as they will forever be two years ahead of these initial Ghanaian experiences. Jamaica is trying very hard for success and commercialisation. Breadfruit is their national food and their Samoan variety trees, now three years old, are growing luxuriantly and have started fruiting. The Bunso shipment is believed to be the first large, new variety breadfruit shipment reaching West Africa's shores since the 1840s when missionaries brought at least one Tahitian variety from the Caribbean to Ghana and beyond. This was just a few decades after the legendary voyages involving the mutiny on the Bounty when other such breadfruit-dedicated voyages brought Tahitian and other Pacific Island breadfruit varieties to the Caribbean.

Now, technicians in Germany and other locations around the world start with the DNA of top-producing Samoan varieties and get the DNA to multiply into tens, then hundreds, and then thousands of tiny tree 'germs' which then start acting like they have sprouted from seeds.

Farmer and community based organizations (FBOs, CBOs, NGOs) through the Bunso to Somanya region which may be interested in receiving trees this year are asked to contact HAG ([email protected]) or the Breadfruit Institute volunteer ([email protected]) as are forestry projects from anywhere in Ghana.

Perhaps 20,000 of the little 200-300 mm trees will be available to Ghana from the Mainz laboratory outside of Frankfurt, Germany in October, November and December.

There is simply no other tropical forest tree with such a massive carbohydrate bonus.

When, for instance, has one ever see a picture of a Samoan, Hawaiian, Tahitian or other Pacific Islander who looked hungry?

And (triple bonus), the timber from the trees is a dense, strong, pest and water resistant softwood used in everything from school, church and home construction to the construction of sea-faring sailing canoes. The canoes that first took the seafaring Polynesian ancestors to Tonga, Samoa, Tahiti, Hawai'i, Easter Island, New Zealand and South America were made of breadfruit timber. Ocean-going sailing canoe made of breadfruit timber in Micronesia
http://www.globalpost.com/dispatch/asia/091029/yap-canoe-festival-micronesia

HAG is now applying for funds to support forestry, FBO, CBO and NGO groups with the costs of the tiny starter trees coming from Germany at the end of the year.