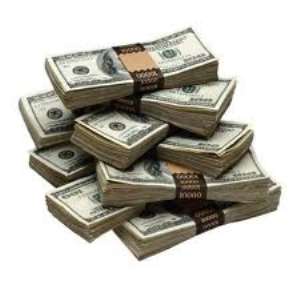 Until recently, Ghanaians have not taken cognizant of phrases such as judgement debt, gargantuan, “wonkye ndi” to wit “let's share the booty”, wayomization etc. which have now flooded our political landscape. Indeed, the chickens are home to roost. Startling revelations here and there, some of us are dazzled and still in a state of quagmire as to the circumstances leading to those questionable payments under the concealment of judgement debts.

It seems the judgment debts brouhaha are far from over, and I may not be wrong if I describe the scandal that is mocking us in the face as the ''mother of all corruption'' especially when there is a clear case of a grand conspiracy by actors within the government set-up to milk public funds at the detriment of the suffering masses.

Whiles the living are having their share of the judgement debt cake, the dead are also resurrecting from their graves to have a feel of theirs. This decay is so disgusting that the vulture will not dare to scavenge on. How on earth can payments be made to and received by someone who is purported to have been dead as at the time of payment? Ghanaians must begin to question the status quo and demand answers for the arbitrary show of power and the appalling loot of public funds.

It is factually accurate that Judgment debt is not new to our governance system, it has been with us since time immemorial; on the other hand, for those who query us on why the hullabaloo on the matter as if it just emanated from the skies; yes we out to make noise from the roof top with our 'vuvuzela' simply because it is within our remit as Ghanaians. The reality nonetheless is the quantum of money involved in the settlements, the circumstances under which the cases were dealt with and how payments were mysteriously made.

The conduct of state officials and government appointees leaves much to be desired, especially when state attorneys virtually go on their knees praying to the court to award cost against the state, when rather they should be defending the state against cost or damages, and also government appointees lobbying for dubious payments to companies and individuals who are litigating against the state. This is pure betrayal against the people of Ghana and such nation wreckers must never be allowed to continue with their official duties in the supreme interest of the state.

I sat quietly in anguish watching the proceedings of the Public Accounts Committee (PAC) of parliament as they questioned the nephew of Nene Ogbe Assumeng II who died 6years ago and was sighted in the 2010 Auditor- General report as having received a whooping sum of GH¢525,600 (¢5.256 billion) in 2010 as compensation for land acquired by the state for the Asutuare factory. If this is not day-light robbery, tell me what it is? Who made those payments and to whom? Perhaps, we may never get an answer to this, but one thing I am certain of is that, ''you can fool some of the people all of the time, and all of the people some of the time, but you cannot fool all of the people all of the time''.

When are we (Ghanaian) going to be told the truth for even once? Where is our patriotism and badge of honour? Our forbearers fought against imperialism and gave us independence, what then are our current crops of leaders fighting for? Is it their unbridled desire to satisfy ones insatiable wants, greed, lust for vanity or what? These questions linger on my mind as I watch events unfold in these entire judgement debt debacles. Even King Solomon, who was bestowed with abundant wealth, wisdom and all other things he desired in the world had to concede at a certain stage in his life and conclude that 'Vanity upon vanities, all is vanity'- they are like pursing after the shadows and chasing after the wind.

I am not sure corruption anywhere in the world has helped the developmental needs of the people or raised their standards of living; but rather impoverished many and have stagnated socio-economic growth. Monies meant for the people always divert into the kitty of the few greedy bastards. Corruptions is so pervasive in today's Ghana that, some few cabals can sit in an air-conditioned office somewhere and negotiate payment to companies and 'ghost' without recourse to due process or simple administrative procedures.

In the case of ISOFOTON judgement claim which rocked the boat quite recently, government had to enter into settlement with them, though it was evidently clear that they had no case. I find it intriguing that, the Attorney- General at the time, Mrs Betty Mould- Iddrisu had to constitute what she called the 'professional group' to investigate the claims being made by ISOFOTON at the cost of $520,000 to the nation. Indeed, the so called 'professional group' presented their report on 1ST November, 2011 and stated in clear terms that the said company mentioned above had no case against the state. Ironically, before the committee could even round-up its investigation, Mrs Betty Mould-Iddrisu had already entered into a consent judgement with ISOFOTON on 29th September rendering the report by the 'professional body' inconsequential. This necessitated some payments amounting to $400,000.00 to ISOFOTON.

If the Attorney-General had no intention to heed to the advice of the 'professional body', why then did she put together the committee? Was it a case of job for the boys or an avenue to stack more cash? I thought it was the duty of government to protect public purse and not to dissipate it. Our Governance has been reduced to a mere theatrical episode with Apostle Agya Atta Mills playing the lead role. The President cannot exonerate himself from this rot and has since placed himself in a see no evil, hear no evil mood.

The IMF some few days ago had to approve $178.74 million to Ghana after the country completed its sixth and seventh review under the Extended Credit Facility Arrangement; in effect Ghana will have to increase its monetary policy rate which will absolutely increase interest rate of banks with Ghanaians having to bear the wrath of such directive. However, government find it more prudent in dishing out public funds in excess of $400 million to individuals and companies under the epithets of Judgement debt.

As if that is not enough, government appointees and their communication team in their usual propagandist role of Squealer in George Orwell's Animal Farm are quick to jump into the defence of organizations and individuals who have been paid Judgement debt under bizarre circumstances just to make black seem white.

The Mills-Mahama administration has consistently taken Ghanaians for a ride and sooner or later, the day of reckoning will dawn on them, when they will have to account to the good people of Ghana.

At all cost, the government and its surrogates are trying extremely hard to seek political equalization by roping in key NPP functionaries including its Presidential candidate in this matter rather than being proactive in ensuring that scarce public funds are well protected and used judiciously for the needs of the people. They now bleat “four legs good, two legs better” instead of the initially agreed “two legs good four legs bad”. That is exactly how the sweets of power can corrupt some greedy few.

But, I will end here by quoting Proverbs 29:2 which reads ''when the righteous are in authority, the people rejoice: but when the wicked beareth rule, the people mourn''. Ghana must wake up against the oppressor!