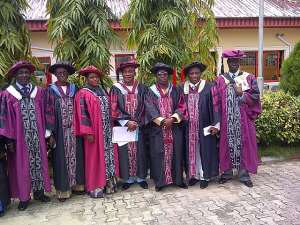 The scenario was quite different a couple of years back. In 2004, a world university ranking exercise was carried out. The results were amazing. The exercise produced the best 200 Universities which sent shock waves across the academic world and the entire world at large. The exercise which was the first of its kind and it indicated that no Nigerian or African University made it to the best 200 Universities worldwide! Four American Universities namely: Harvard University, University of Beckley California, Massachusetts Institute of technology; and California Institute of Technology topped the list as the best four Universities in the world respectively while Oxford and Cambridge Universities came fifth and sixth respectively. The 200 elite Universities are located in 29 different countries of the world with the United States, Britain, Germany and Australia having the highest number of well-ranked Universities with a total of 62, 30, 17 and 14 entries in that order.


Among the 30 top educational institutions in Asia, Japan has 12 Universities, with the Universities of Tokyo, Kyoto and Osaka taking the lead. In Asia, the criteria for ranking are basically four namely: research quality; Teaching Quality, Graduate Employability and Internationalisation. If we adopt the four criteria that are popular in ranking Universities in Asia, it is explainable why Nigerian Universities are losing their competitive edge not only at the global arena but also continental Africa.

For the 25 years, the Nigerian educational system has been undergoing a profound crisis. The familiar areas of crisis in the system cover a broad spectrum of problems and conflicts involving men, measures and resources. The educational system is bogged down by inadequate funding for teaching and research. The pathologies of “brain drain”, academic wastage, decaying infrastructure, inadequate teaching, industrial strife, declining productivity and budgetary bleeding have accelerated the progressive decay of the system.

The politicization of education against the wisdom of educational planning economics has resulted in massive uncoordinated expansion of the educational system. Politicians at Abuja now impose University administrators without recourse to the Senate – which is statutorily empowered to elect Vice Chancellors. Politics has eroded university autonomy and academic freedom, making the ivory tower looks like an annex of Aso Rock. It is worse at the State level where policies such as admission of students, employment of teaching staff and others are subjected to ethnic politics.

Apart from the central issue of funding, physical infrastructure and the quality of the teaching staff, at the global level, there are two key indicators used to measure how well a university system is faring. These are growth competitiveness index (GCI) and public institution index (PII) The World Economic Forum (2004). In growth competitiveness, Nigeria ranks 12 in Sub-Saharan Africa, SSA, and 87 in the world. In terms of public institutions index, Nigeria ranks 20 in SSA and 98 in the world. Growth Competitive Indicators (GCI) uses hard data and survey data for ranking educational institutions. On the other hand, the Public Institution Index, PII is a composite of the contracts and laws sub index and corruption sub index. Ostensibly, Nigeria ranks below such less endowed countries as Cameroon, Namibia Ghana and Senegal. The general perception is that Nigerian Universities are not well positioned to contribute effectively to productivity, growth and the national economy.

There is a correlation between low quality education and the productivity of University graduates. The attenuation of quality invariably implies low quality graduates who cannot contribute substantially to the productivity of the economy. Today, about 40 million graduates in Nigeria are not employable because they lack employable skills and talents needed for a dynamic economy. As the graduate unemployment index soars, the indication is that the state of university education is worsening. This ugly trend is worsened by the fact that Nigeria has not defined her position in a fast globalizing economy.

The Nigerian Universities Commission (NUC) recently presented to the Nigerian public, a ranking of universities in the country in hierarchical order that is in tandem with their performances in the assessment exercise carried out by the Commission. The ranking of the Federal Universities was purely based on quality of academic staff which according to NUC, is one of the most important indices of university education as the academic staff were measured by the output in research, teaching and community service. Other indices used by the NUC to arrive at the rankings are: the level of scholarship and research grants won by such staff, the volume and quality of contributions to the advancement of knowledge, his/her ability to deliver good quality teaching, administrative experience, and level of commitment to serving the community within and outside the University.

On research, Nigeria spends a paltry 0.1 % on research and development, yet political power holders pay lip-service to development. Besides, the Federal Universities spend only 1.3% of their budgets on research. The implication is that technological breakthrough or development for that matter cannot happen without engaging in basic, applied research. Research could be better funded by the private sector; as such research results may be commercialized for profit maximization. Research constitutes a veritable catalyst for economic advancement, but Nigeria has neglected this critical aspect of quality education. Today, no Nigerian university is on the list of the top 1,000 schools around the world in terms of publication of research output. The panacea proposed is for institutions to begin to develop websites and migrate their research reports online for the world to see.

Apart from the challenge of under-funding, the Nigerian University system lack of research skills in modern methods, dearth of equipment/materials for carrying out state-of-the art research. University Lecturers are often overloaded with teaching and administration schedules, and this leaves them with very little time for research. Besides, most Universities have difficulty in accessing research funds, and the young lecturers in the Universities have little or no mentorship because the senior professors have been brain-drained out of our Universities.

The funding of education is most worrisome. Over the years, funding has not kept pace with the exponential expansion of the system. For example, the Federal Government invested 11.13% in 1999, 5.90% in 2002, which falls far below the UN recommended minimum threshold of 26%. Nigeria's GDP Spending on education is about the lowest in Africa. It is disheartening that Nigeria, which is the intellectual laboratory of Africa, could spend only 0.76% so little on education. Other less endowed nations invest more of their GDP in education (Angola 4.9%; Ghana 4.4%; Kenya 6.5%; South Africa 7.9%, Malawi 5.4% and Tanzania 3.4%). Funding in 2009 and 2010 witnessed a slight improvement but the systemic decay created avenues for internal leakage of funds, hence the financial haemorrhaging has continued unabated.

The system is yet to grapple with knotty issues of gender inequality, access and equal opportunities. The need for curriculum innovation is no less important than innovations in pedagogical methods. Nigeria's educational system needs to align with the demands of globalization. We have not adhered to the United Nations recommendation that developing countries should invest a minimum of 26% of the budgets in education, but our politicians invest more money in printing voters' card and preparation of voters register than funding education. At the National Assembly, our representatives negotiate their allowances and shun the Freedom of Information Bill, yet they claim to the strengthening internal democracy without democratic accountability.

The proliferation of Private Universities in the country shows that political power holders are not determined to improve the mainstream of public education system. This is the same calamity that has befallen the petroleum sector. Education at the basic level is a public good and is heavily subsidized in other economies. The problem with the Nigerian educational system is chronic under-funding of the educational system and over-rewarding of the political class. Nigeria is the only country where by a Local Government Councillor is given more financial rewards than a university Professor.

The monies stolen by independent marketers can provide massive infrastructure for at least 20 Universities to make them world class standards. The billions of Naira Nigerians spend on education abroad for a year would be adequate enough to improve Nigerian universities to compete favourably with other institutions abroad. Until the system guarantees university autonomy, restores academic freedom, and provides adequate infrastructure, our institutions will continue to lose their competitive edge in the global arena. The unfortunate thing is that there are no Nehemiah's to rise up to rebuild the fallen walls of our ivory towers.