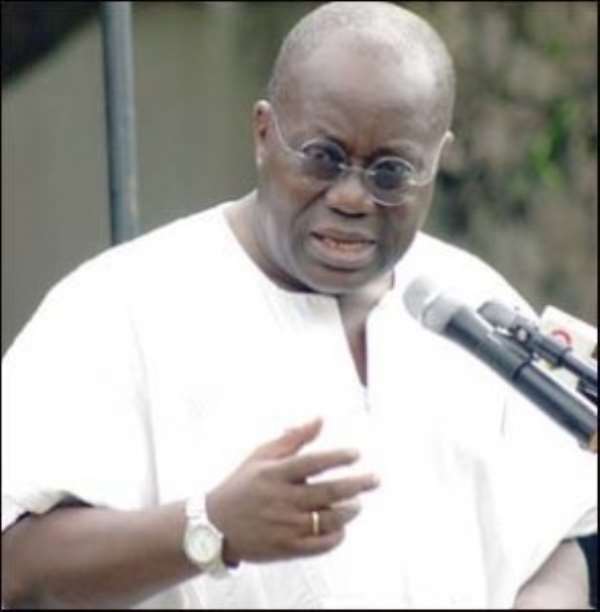 Facts emerging from judgement debts paid to Construction Pioneers (CP), City & Country Waste Limited (CCWL) and the ongoing tussle over another financial claim by Africa Automobile Limited (AAL) for unlawful abrogation of contracts under the New Patriotic Party (NPP) government, not only suggest that the then Attorney General & Minister of Justice, Mr Williams Addo-Dankwa Akufo-Addo, was not only sleeping on the job but exhibited worrying levels of incompetence as the state's chief legal advisor at the time.

The Mills administration has had to cough out €94 million and $12 million to pay CP and (CCWL) respectively, and is also locked up in an out of court settlement with AAL over the company's $1.5 billion claim on the state in judgement debts, as a result of wrongful political and legal decisions made by the Kufuor-led NPP government on the express advice of Mr Akufo-Addo.

This was before he embarrassed the government by losing the Fast Track High Court case against Mr Tsatsu Tsikata, which verdict was overturned through what, people say, was executive manipulation of the judiciary, and President Kufuor later reshuffled him to the Foreign Ministry to cover up his incompetence as A-G.

Ironically, the NPP has been trying hard to escape responsibility by blaming the President Mills government for the huge financial losses incurred by the state through these judgement debts.

Construction Pioneers (CP) - €94 million
The NDC government has had to painfully pay the whooping sum to CP as a result of the refusal of the NPP government, after coming to power in 2001, to pay CP for roads it had constructed based on the advice of Mr Akufo-Addo.

Hon Joe Ghartey, a successor to Mr Akufo-Addo as A-G, who is his junior at the Bar, later tried to salvage the situation but the then government stack to the former's advice.

The International Chamber of Commerce (ICC) later ordered Ghana to pay €153 million to CP, after the country lost through an arbitration process. NPP government stubbornly refused to pay, creating a situation where interest of €8,000 ($12,700) a day accumulated on the principal.

By the time the NDC came to office in 2009, the debt had reached €653 million. CP secured another order from the ICC to attach the properties of the Government of Ghana, (GOG), which meant CP could sell Ghana's properties anywhere in the world to defray the debt.

The construction company immediately moved to attach Ghana's UN Accounts and properties belonging to the Ghana Cocoa Processing in London but Attorney General, Betty Mould Iddrisu moved in to prevent Ghana's properties from being sold.

In a settlement with CP, she managed to reduce the debt to €94 million which the state immediately began to defray. But in a funny twist, the NPP, which caused the debt and allowed it to sky-rocket to €653 million, has been questioning why the government is paying off the debt.

As usual, the NPP managed to hoodwink their supporters to start attacking Betty, instead of congratulating her for being able to negotiate Ghana's indebtedness to CP downwards.

On assumption of office by the NPP in 2001, CCWL was targeted for collapse purely for political reasons, simply because it belonged to Mr Eddie Annan, an NDC member. Its lawful, waste management contract with the Accra Metropolitan Assembly (AMA) was speedily abrogated and some of its equipments seized by the government.

NPP argued that the company had no contract with the government of Ghana. it went to court and won a $12million dollar judgement debt against the state, which the Mills government has paid obligatorily in order to avoid accumulation of interest on it to worsen the situation. It is emerging that the company is in the process of taking over some assets of AMA in relation to the case upon a court order.

The vehicle dealer, African Automobile Limited, sued the state in 2005 seeking damages for abrogation of contract, breach of repayment of a Barclays Bank loan and an order to compel government to take delivery of some 87 galloper vehicles said to be growing rusty from non-use.

This was because the NPP government on the ill advice of Attorney General Akufo-Addo refused to pay for the gallopers.

Even though the NPP tried to dodge the issue by lying that AAL had no contract with government, hardcore evidence exposes the fact that the NPP government through then A-G filed a defence rejecting the claims and also making a counterclaim against AAL.

NPP now expects the NDC which entered into the lawful contract with AAL to cover-up their unlawful action that has brought the state into this mess.