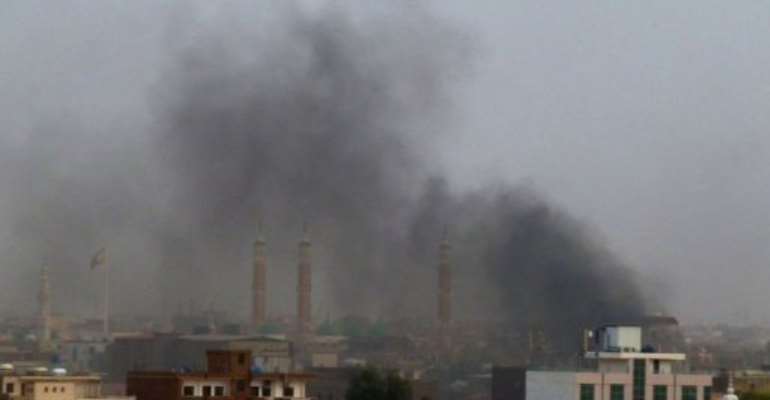 Smoke rises from burning tyres during protests in the Sudanese capital Khartoum on June 22. By Ian Timbarlake (AFP/File)

KHARTOUM, Sudan (AFP) - About 1,000 people were arrested and hundreds hurt, many by tear gas, during anti-regime protests in Sudan on Friday, an activist group said on Saturday's anniversary of President Omar al-Bashir's coup.

The information minister called the protesters "rioters" who threaten the country's stability.

"Some were arrested and released," said an official from the Organisation for Defence of Rights and Freedoms.

The group's figures indicate a dramatic rise in the number of arrests on Friday, the 14th day of anti-regime demonstrations sparked by inflation.

"The figure of those arrested before yesterday (Friday) was about 1,000 in the whole country," said the official who asked not to be identified because of the tense situation.

Many are still being held in prisons or "ghost houses," the location of which is unknown, he alleged.

"They don't tell you where they are. You are not even allowed to ask," he said.

One of those detained was Sudanese journalist Talal Saad, who had taken some freelance photos of the protests to the AFP bureau in Khartoum on Friday.

Saad called AFP on Saturday evening to say he had been released and was fine.

Police said "some of the rioters" were arrested and would be brought to trial after "small groups" demonstrated in Khartoum and elsewhere.

Police contained the situation "with a minimum use of force," they said.

The Organisation for Defence of Rights and Freedoms said "a few hundred" people were injured during the Friday protests.

Many elderly people were affected by tear gas, but other injuries came from rubber bullets, tear gas canisters or beatings, the rights group official said.

Information Minister Ghazi Al-Sadiq issued an appeal for people "not to allow the rioters to undermine security and stability of the Sudan."

In a statement on the official SUNA news agency, he said Sudanese have the right to peaceful expression without resorting to violence "to allow the enemies to exploit these protests to carry out foreign agendas against the country."

Activists had called for a major day of protest on Friday.

In one key disturbance, witnesses said police fired tear gas and rubber bullets to disperse hundreds of peaceful protesters who had gathered in Hijra Square beside the mosque of the opposition Umma party in Khartoum's twin city of Omdurman.

One witness said demonstrators carried Sudanese flags and banners reading "The people want the regime to fall," a slogan used by protesters during the Arab Spring uprisings against regional strongmen over the past year.

They burned tyres and threw stones at police before running for cover, the witness said.

UN High Commissioner for Human Rights Navi Pillay has urged the government to avoid "heavy-handed suppression" of protests and to immediately release those detained for exercising their rights to freedom of assembly and expression.

Britain and the United States have also sought the release of those detained for peaceful protest.

Bashir was declared winner of a multi-party election in 2010, but observers from the European Union and the US-based Carter Centre said the ballot failed to come up to international standards.

Bashir is wanted by the International Criminal Court for crimes against humanity, war crimes and genocide allegedly committed in Sudan's western region of Darfur.

He has played down the demonstrations as small-scale and not comparable to the Arab Spring uprisings in Egypt and elsewhere, maintaining that he himself remains popular.