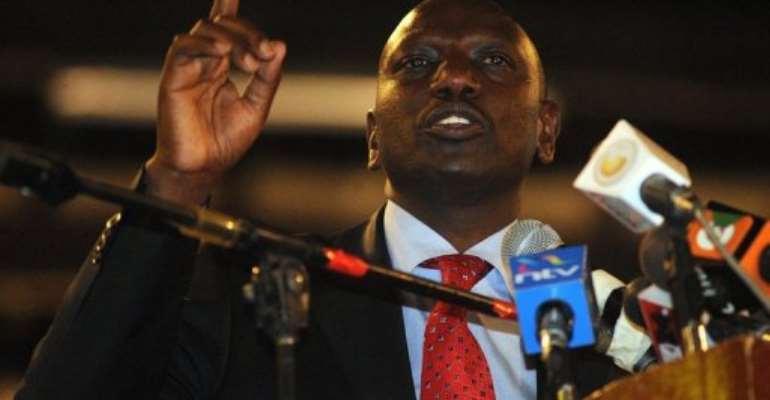 THE HAGUE (AFP) - The trial of two top Kenyans, including a presidential hopeful, over 2007 post-election unrest could begin in March in The Hague, despite fresh polls being scheduled the same month, prosecutors and lawyers said Monday.

The International Criminal Court had ruled in January that former minister William Ruto, 45, and radio boss Joshua arap Sang, 36, should be tried for crimes against humanity for organising attacks on ruling party supporters after disputed polls five years ago.

"Both the defence teams have submitted March 2013 for the start of the trial date," said Florence Darques-Lane for the prosecution at a hearing to sort out the trial's details before the Hague-based ICC.

"The prosecution has no objection to setting a trial date at such time," Darques-Lane said, but she wanted a written undertaking that "the accused, regardless of the results of the elections... would appear for trial."

Ruto's lawyer David Hooper added: "We concur with March of next year," and added "both accused are voluntarily attending" saying "they have given their word," to abide by the requirements of the court.

Ruto is considered a leading candidate in the upcoming vote.

Presiding Judge Kuniko Ozaki said a ruling on the trial date will be made before the start of the court's summer recess on July 14.

The east African country's first general elections since the violence that broke out after the 2007 polls are due to take place on March 4, although the date announced by the electoral commission remains disputed.

Ruto and Sang face three counts of murder, forcible transfer and persecution relating to attacks by members of the opposition Orange Democratic Movement against ruling Party of National Unity supporters.

Two then PNU members, Deputy Prime Minister Uhuru Kenyatta and former civil service chief Francis Muthaura are also to face trial for their roles in the unrest. Their hearing to set a possible trial date takes place on Tuesday.

Both Ruto and Kenyatta have declared their intention to contest next year's presidential vote but they have also vowed to cooperate with the ICC.

On Monday, Hooper, arguing for Ruto who was not present in court, objected to the amount of information blurred out -- called redactions -- in submissions filed by the prosecution, saying it made their own investigations very difficult.

The prosecution said redactions were done to protect the identity of witnesses in the sensitive hearing but Hooper argued: "There has to be a balance between protecting a witness and the rights of the individual."

An incredulous Hooper said he had seen instances where evidence about "six chickens killed" were blurred out "because it may identify witnesses."

Violence shattered Kenya's image as a regional beacon of stability when then opposition chief Raila Odinga accused President Mwai Kibaki of rigging his way to re-election following the December 27, 2007 polls.

What began as political riots, quickly turned into ethnic killings of Kenyatta's Kikuyu tribe, who in return launched reprisal attacks, plunging Kenya into its worst wave of violence since independence in 1963.

More than 1,100 people died during the violence.