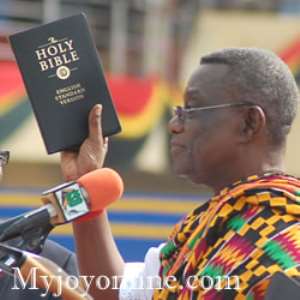 It comes to me and many like-minded Ghanaian's as no surprise, when the Mills-Mahama led administration in another comical expedition, sought to usurp the powers of the judiciary by setting aside a judgment upheld by a competent court of jurisdiction thus the Supreme Court of the land, to suit their whims and caprices. In this piece, I shall not profess to be a legal luminary nor try to invoke certain constitutional provisions; however, my thoughts shall purely be centered on logical reasoning and realism.

Last week, we were awakened by the final verdict of a controversial case involving Mr. Jake Obetsebi Lamptey (Defendant) and two others, namely; Mr. Samuel Okudjeto Ablakwa and Dr. Edward Omane- Boamah (Plaintiffs) who surprisingly are current Deputy Ministers of State. They resorted to the Supreme Court of the Land, to declare null and void, a landed property purported to have been bought by the defendant without due process which to them was clouded with un-marched secrecy and conflict of interest. In summary, however, by a 6:3 majority decision of the Supreme Court, they upheld that the defendant did not act wrongly whether procedurally or legally in the acquisition of the said landed property and that the plaintiffs lacked the necessary evidence to prove their case beyond reasonable doubt, hence the case was thrown-out. This verdict by the bench undeniable now stands in our legal books as a precedent and may be a point of reference in any on-going or future legal battle alike. In consideration of the circumstance, and given the fact that, all the necessary payments have been made after following due process, Mr. Jake Obetsebi Lamptey can however proceed to claim his lawful asset.

Nonetheless, in a hypocritical manner, we are been emphatically told that, cabinet in the supreme interest of Ghanaians, cringe on the sale of the landed property to Mr. Jake Obetsebi Lamptey, and going further to set it aside. This is indeed, a travesty of justice and an upfront to the rule of law. It is simply un-acceptable in a democratic dispensation like ours; not even the late leader of North Korea, Kim Jong-Il will engage in such brazen disregard of the justice system. This “legal rape” must never be allowed to stand. Come to think of it, if cabinet so disagrees with the verdict, is it not prudent for the state to return to the same Supreme Court for its reversal? Sooner or later, cabinet will find solace in overturning and delivering their own judgments without recourse to the court of law. Like someone may put it, in the court of law, judgment is not based on sentiments, emotions and mere propaganda but by facts and hardcore evidence. So whiles some may disagree with the principle of selling of state properties to both Public and private individuals, and may even advance reasons of morality, one must take cognizance of the fact that, such policies have legal backing and are clearly enshrined in our statutes. Therefore it is untenable and most un-justifiable to make judgment on this case base on morality at the detriment of our constitution.

I, however, find it intriguing that cabinet could arrogate to itself a final authority in judicial matters. This is an un-imaginable violation of the constitution of the land and makes mockery of our judicial independence. Never in our history has a government gotten so-trapped and committed itself to such unpardonable gaffes which have resulted into gargantuan discomfiture and loss against the state. It seems the Mills-Mahama administration takes glad tiding in the payment of Judgment debts as an unprecedented achievement, and is so determined to plunge the state in more of such tragedy. What therefore happens to the state if it is sued for contempt of court and infringement on the right of Mr. Jake Obetsebi Lamptey to have access to his lawful property? Your guess is as good as mine.

Indeed, if the government was genuinely committed to the scrapping of such public policies such as allocating or selling of government properties to public and private individuals especially politicians, why the wait for the final determination of the case mentioned above. Couldn't the government as a matter of priority and unreserved commitment initiated a legal frame work through its appropriate bodies to ensure its abrogation and demise in our statute books?

The Mills-Mahama administration obviously is on the go, not only to show where power lies but to score cheap political points. But as faith may have it, he who demands equity must come clean.

It is a known fact that, leading members of the current NDC government including His Excellency the President, Prof J.E.A Mills, were all beneficiaries, and equally culpable in the allocation and purchase of government properties within the period they served as Public officials some years back. The hypocrisy and double standard of the President under the guise of religious epithets abound.

If the President and some appointees of his, had strong convictions about the sale of governmental properties to individuals and organizations, be it public or private and indeed have high moral grounds, why didn't they reject those state lands given to them like other public officials with strong personal convictions did? Are the President and his appointees willing to consider giving back state lands they took? I believe what is good for the goose is as well good for the gander, and that His Excellency Prof. J. E. A Mills should lead the way by honorably handing-over all state properties he has bought, until then, he has no justification or what so ever to question other persons moral right to buy and own state properties.

What is right is right and what is wrong is wrong, it does not really matter whether it comes from the left or right. Governmental properties must at all times be guarded religiously for the sake of posterity and saving of unnecessary cost to the nation.

To conclude, I challenge the Mills-Mahama administration to deliberately take-steps as a matter of urgency through constitutional means to amend or scrap the legislative instrument that seeks to give individuals and organizations the right to purchase government properties. Until we see such a commitment from government, the value is still the same. Enough of the populism!