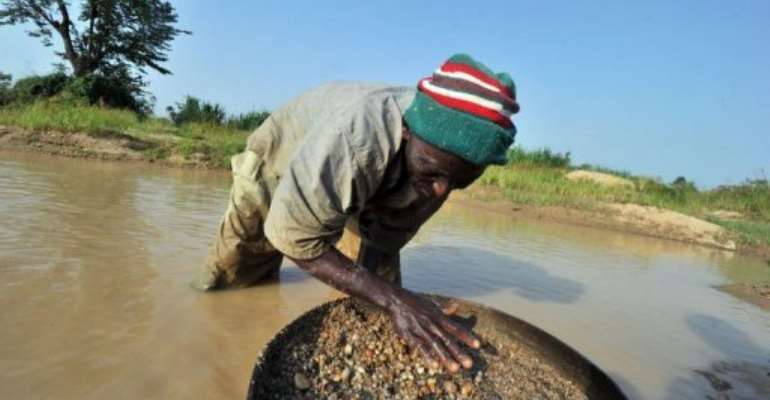 A diamond prospector filters earth from a river in April in Koidu. By Issouf Sanogo (AFP/File)

KOIDU, Sierra Leone (AFP) - It has been weeks since miner Sembo Sesay found a diamond in this eastern Sierra Leone town, whose soil was once littered with the stones that fuelled one of Africa's bloodiest wars.

"Diamond no there," he laughs, his voice tinged with disappointment as he examines the "shaker" after plunging the sieve repeatedly into a muddy pool, muscles taut with exertion as he expertly swirls the water.

Every day just after sunrise, men carrying shovels and sieves set out for the gruelling task of digging, lifting and sifting waste sand for only 3,000 Leones ($0.69) a day in Koidu.

But the lustrous gems are few and far between these days.

"We are really worried if we don't see anything, there is no other job. We need the diamonds to survive," Sesay, 27, says.

On the other side of town, Koidu Holdings, a mining company owned by Israeli diamond magnate Beny Steinmetz, is testing a new plant built to process the diamonds from its two vertical kimberlite mines as part of a $150 million (115 million euro) expansion plan.

Small-scale artisanal mining has sustained this area since diamonds were discovered in 1930, and it was here that the 968.9-carat Star of Sierra Leone -- the largest alluvial diamond ever found -- was mined in 1972.

But surface diamonds are nearly depleted and only capital-intensive mining can now uncover the gems.

Koidu suffered some of the worst ravages of Sierra Leone's war in the nineties as rebels forced citizens to mine at gunpoint.

Residents speak of streets dug up and houses demolished at even a hint they were sitting on diamonds.

These gems were smuggled to Liberia -- whose former president Charles Taylor was last month convicted of aiding and abetting Sierra Leone rebels in exchange for diamonds -- and Guinea, making their way onto ring fingers across the globe while rebels used the weapons they bought to sow terror.

Prosecutors have sought an 80-year sentence for Taylor in the first judgement against an ex-head of state by a world court since the World War II Nuremberg trials.

Once one of the most powerful men in west Africa, Taylor will be sentenced on May 30 by a court based in The Hague.

Since a ban on the sale of Sierra Leonean diamonds was lifted in 2003, the country has taken pains to clear its image as a provider of "blood diamonds" and erase memories of the civil war in which several thousands were killed or had their limbs amputated.

Koidu now supplies US jewellery icon Tiffany & Co and Steinmetz is planning to float the mine on the Hong Kong stock exchange later this year, according to the Financial Times business newspaper.

However 10 years after the war, Koidu has little to show for its diamond wealth.

Dusty and desolate, it is reminiscent of an 1800s mining town, lined with diamond trading offices -- mostly Lebanese-owned -- and clapped-out stores selling shovels and sieves for those still hoping to try their luck.

Koidu is a seven-hour journey from the capital Freetown, the last half of which on a bone-rattling dirt road with potholes so large that ducks waddle over from mud-hut villages to swim in them after a downpour.

Amid the glaring poverty, much hope rests on Koidu Holdings' presence in the town, but many are unhappy with the lack of visible development, while the resettlement of communities close to the plant has caused friction.

In 2007 government shut the plant for a year after riots left two people dead.

Now, hundreds of colourful houses, schools and a free health clinic opened in 2011 by the vice-president of Tiffany & Co have sprung up for the resettled households.

"These communities where diamond mining is done are the most deprived areas. You see poverty in the air," Tongu said. "There is nothing to show."

As part of a law passed in 2010, all mining companies working in Sierra Leone have to give one percent of their annual turnover to community development projects but the first tranche of this has yet to reach Koidu.

Diamond revenues make their way back to the community through the traditional paramount chief, who is elected for life.

"It is left with the chief if he has a good heart to do some projects, some of them are doing that, but very few. So the monies are largely not used for the intended purpose," says Tongu.

Alpha Kpetewama, development adviser for the Tankoro chiefdom and economist, says the presence of Koidu Holdings is the only way to lift this community out of poverty.

But he admits: "We have not been very successful in managing the high expectations of the community."

Over 90 percent of staff are locals, but one company cannot employ an entire town.

"Many of the ordinary citizens, uneducated, will not begin to understand or appreciate until they begin to see tangible development on the ground ... this has yet to happen," says Kpetewama.

At another artisanal mine, called Number 11, scores of men rhythmically dip their sieves into muddy pools.

They are mostly ex-fighters who were given old tailings to sift through after the war to "distract them from evil deeds", says Musa Sawaneh, 40, who is perched on a motorbike overseeing them.

"Sometimes you go one month without finding a diamond," he says.

Former enemies from different factions in the war now mine side by side.

"We are happy, but we are hungry ... just surviving," says a former combatant.