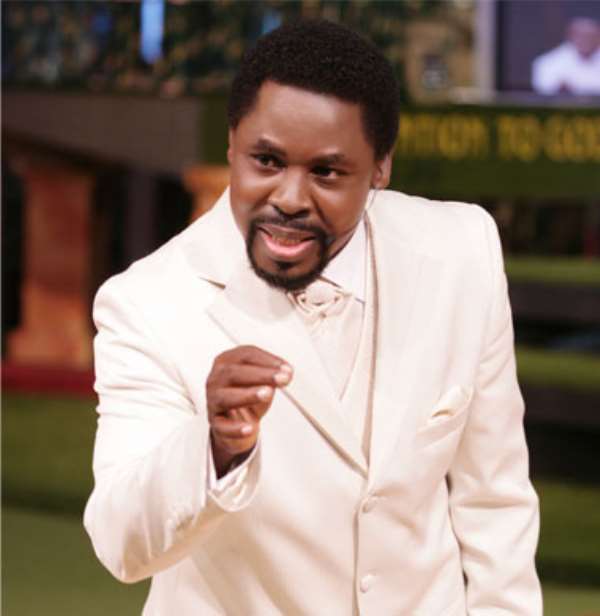 Since Goodluck Jonathan ascended the throne of Nigeria as President after the demise of Yaradua , one of his favourite routine has been seeking the face of God in prayer. During the constitutional crisis leading to the death of Yaradua President Goodluck was made so uncomfortable by different power plays that he had course to receive prayers from different Christian groups genuinely concerned about the precarious fate of Nigeria. Thus one of the first things he did as Acting President was to call on Jasper Akinola, then Primate of the Anglican Communion to suggest names of those to guide him spiritually and oversee the chaplaincy of State House Chapel. Primate Akinola gave him three names from which he appointed a chaplain. On the 9th of May , 2010,days after the demise of Yaradua, president Goodluck walked into the presidential wing of his office for the first time in the company of close aides like Yayale Ahmed, then Secretary to the Federal Government, Ima Niboro, presidential spokesman, Mike Oghadiome, his principal secretary and the Chaplain of Aso Villa ,Venerable Obioma Onwuzurumba who offered prayers to God for the peace and progress of the nation before the President performed his first official assignment .

The attempt by President Goodluck to seek divine guidance in the handling of the affairs of Nigeria was hijacked by different groups of religious leaders especially from the different Orthodox and Pentecostal denominations who turned the exercise into a multibillion naira business.

Immediately president Goodluck signified his intention to contest for the Presidency, coupled with the threat of PDP northern elders on zoning, a financial breakthrough came for those spiritual leaders. All manners of prophecies on how Babangida, Atiku and others wanted to kill the President was making rounds. They so much frightened the president with such theories and convinced him of the need to release hundreds of millions of naira to different prayer projects to secure his presidency.

The Christian Association of Nigeria, Pentecostal Fellowship of Nigeria and some groups under the Anglican Communion made brisk business out of the situation. Money ranging from tens of millions to hundreds of millions of naira was released numerous times for this prayer project. Some conferences were sponsored by the presidency.

Unknown to the President, he has become a source of mega financial breakthrough for some people. These religious leaders usually organise minister's conference or pastors meetings and request all attendees to put down their names for onward transmission to the president. They baited the impoverished and unsuspecting pastors and church workers that the President wants to be paying them monthly for prayers for Nigeria. These undiscerning pastors will then struggle to put down their detail which is later forwarded to the presidential prayer coordinators as evidence of a standing prayer squad. Some collected the names of their church workers during workers meetings and forwarded to the prayer coordinators in the State House as evidence of a standing prayer group. They used this tactics to collect money running into billions of naira from the president's inner campaign fund.

These some of these pastors prophesied to Babangida before the Ciroma Concensus Committee rejected him and preferred Atiku to run on behalf of the north. They then switched over to Atiku and when he was manipulated out of the PDP primaries, they switched over to Goodluck Jonathan. The only person they did not carry the prayer project to was Buhari because they know that only a 'thank you' greeting will come out of there. When one of the prophets had a brush with the then governor Ibro of Kogi over the looting of state treasury and the former governor was harassing him with police and security agents, it took a phone call from Nigeria's evil genius from Minna before the governor withdrew his venom.

When the PDP convention was fast approaching President Goodluck personally visited some mega churches around the Lagos-Ogun axis for political prayers and sent high powered emissaries to others for prayer support. Those privies to those meetings and private discussions noted that there was no attempt by these religious leaders to equally convince the president of the need for a free and fair elections; neither did they impress it upon him to fight corruption, which is Nigeria's biggest problem. They also failed to encourage him to muster the will to break the various cabals holding Nigeria hostage. They only anointed him with oil; some gave him special Bible, special oil and special handkerchief to use to defeat his electoral enemies. They delivered the message of triumph to him and failed to include the message of service to humanity.

The presidential prayer project was elevated to another proportion when some religious leaders with prophetic anointing were brought into the picture. This group led by a young prophet based in Port Harcourt but who frequents Abuja for special programme at the Women Development Centre, mesmerized the president and his inner caucus with prophecies, calling people by their names, phone numbers, account numbers and other family secrets. By the time he was over he collected his share of the national cake in hundreds of millions of naira which he used to buy a house in Maitama, Abuja. This young prophet confirmed the speculation making rounds in pastoral circles in the nation's capital that he was given N500 million naira ($3.3million dollars) as National Breakthrough Offering.

His equally young friend and prophet based in Abuja who married a pretty lady with a lavish, celebrity laden wedding reception at Thisday Dome in 2011 was reported to have collected up to N450 million naira ($3million dollars) as prayer offering. Another Abuja based Pentecostal Bishop from Taraba State was accused of collecting hundreds of millions of naira for a section of the prayer project. He was also rewarded with a brand new Toyota Land Cruiser Jeep by the President. He has finished a stately designed compact cathedral in the outskirts of Abuja. When some pastors who mobilized their members to constantly pray for the peace of the nation out of patriotism confirmed that indeed billions of naira flowed for prayer project without their knowledge, it created disaffection and some cried foul. The same prayer business that took place in Abuja was replicated all over the country. Religious leaders of all denominations used various styles to benefit from the prayer national cake through links to the president The funds used to sponsor all these prayers were drawn from the inflated subsidy bills which released abundant resources to prosecute the elections.

Weeks before the removal of fuel subsidy, these prayer tycoons saw another opportunity to take their already enhanced financial status to the Bill Gates level. They frightened the presidency with prophecies of how Buhari, Bakare, Babangida, Atiku, Tinubu and Fashola wanted to sponsor fuel subsidy protests and how God wants to deliver him from these evil men. They prescribed prayer and fasting for the president and his inner caucus before the removal of fuel subsidy. President Goodluck and his inner caucus observed days of fasting and prayers between the 26th and 31stof December, 2011. The principal purpose of the fast was to frustrate the intended fuel subsidy removal protest. When these prayer machines gave enough signals that God have taken control, the announcement of subsidy removal was effected

President Goodluck was shocked at the level of resistance to the fuel subsidy removal. He was equally frightened at the security reports that a continuation of this protest into the second week could precipitate a revolution with unpredictable consequences for the thieving elites. When Nigerian Labour Congress capitulated under controversial circumstances and suspended the mass protests, the prayer groups praised their prayer prowess for labor's sudden volte-face. They were handsomely rewarded again for averting the popular Occupy Nigeria protest and a possible revolution. For some that managed to scramble a sort of prayer, the focus was on how God should deal mercilessly with Pastor Tunde Bakare and his group of rascals from the kingdom of darkness. Some of them were rewarded with some board appointments especially the Subsidy Reinvestment and Empowerment Programme Board in their various states of origin and zones. Others got their cronies into choice appointments in various boards of government parastatals.

The constant harassment of the nation by Boko Haram has become another spiritual money spinner. Various groups are receiving prayer money running into billions of naira in the name of securing the President against Boko Haram attacks. They failed to impress on the president to expose his fellow party men linked to Boko Haram. This spiritual stance of pampering Boko Haram sponsors while the nation is on fire is a source of disagreement between the national leadership of Christian Association of Nigeria (CAN) and some of the prayer tycoons. CAN leadership believe that the President is too timid in his handling of terrorism while the merchants believe that the president's security is of paramount importance. God is yet to give these prayer merchants answer on how the nation can overcome Boko Haram but they have insightful revelations on how the president can escape Boko Haram attacks.

This prayer business has become a multi billion naira breakthrough from the time President Goodluck signified interest in contesting for the presidency. They failed to give Jonathan the much needed spiritual guidance on how to bring about a transformed Nigeria, devoid of corruption, mediocrity, lawlessness and injustice. They failed to preach the gospel of Jesus Christ as illustrated by Apostle Paul in Romans Chapter 8 verse 9 which says that '' For the earnest expectation of creation awaits the manifestation of the sons of God'' implying that impoverished Nigerians believed that probably President Goodluck is the much awaited God sent leader who will pull down the cabal that had feasted on the collective commonwealth of Nigerians. They see divine visions on how all the enemies of Goodluck will be crushed but no vision yet on how to bring peace to the troubled nation. This is indeed a season of breakthrough for these servants of God.