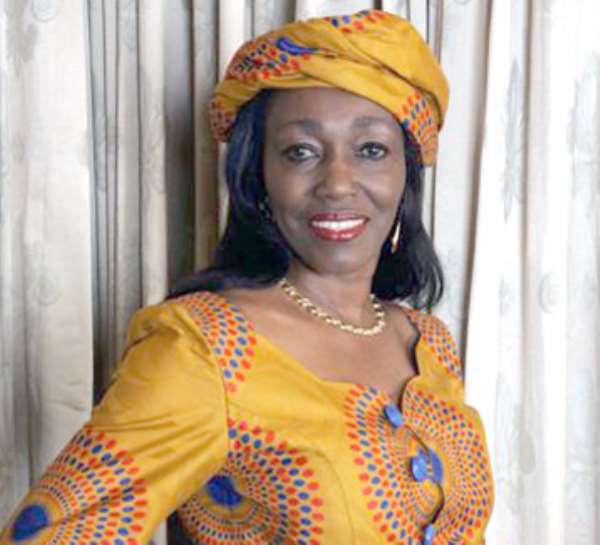 It is with a heavy heart that I wish to engage you at whatever time you may be reading this. Unfortunately, today is MOTHERS DAY, but I am not in a celebrative mood. We are to have a hard talk.

After the National Delegates Congress of the National Democratic Congress which was held in Sunyani, I thought whatever mistakes you may have made vis-à-vis your contestation of the Flag-bearer-ship of the Party would have been realized. This wishful thought has finally made me see myself in a 'fool's paradise'. For wishful thinking never makes a man to ride a horse.

In your situation, Mom, I see all that has happened so far not to be regrettable MISTAKES – at best if they are, then, they are' INTENTIONAL' mistakes – and as such cannot be corrected. In circumstances of the sort it is only the withdrawal of the INTENTION that matters, and that prerogative is the exclusive right of the one who harbours it.

Unfortunately, Mom, intentions are normally very difficult to remove from our systems. This is where I think – and must state, that you have a huge problem. The difficulty at discarding an intention of leading the NDC is what is about bringing your stature down to the ground.

But it must be emphasized that the stature I am talking of is the one that you are riding on the shoulders of our father – founder of the great NDC, Flt. Lt. J.J. Rawlings. I must stress that indeed, the respect you commandeered, not earned, was all due to him. He has, on the other hand – earned his, and is seen as a hero wherever he goes.

Mom, you know what I am talking about. For deep within you, you are aware that prior to the Delegates Congress, your rounds throughout the country foretold you that you were not on the ground. In some regions, you were told in polite manner that they do not want you to contest and “suffer a humiliating defeat”.

In spite of the grass-root support base being frank with you that do not go, you went ahead, contested and lost to the sitting president.

Thereafter, you have made up your mind that you would not allow the Party to have its peace. In fact at your level, Mom, it can only degrade – but not uplift you, to tell lies. Therefore, your assertion at Akuafo Hall of the University of Ghana, that the Sunyani elections were stolen is untenable.

At the congress grounds, there were photo registers of delegates which were in the possession of your individual agents who sat close to the polling booths for identification purposes. You had your agents there – and they could not raise a finger of objection when something untoward was taking place against your interest?

All that you did to undermine the credibility of the NDC as a political party has only gone a long way to expose elements of greed and selfishness in your person. If you can wish your own Party in government a one term regime, you can only suffer within your own conscience.

Just last week, you shook the foundation of the Party when you made your lawyers write to the Party hierarchy threatening to withdraw the umbrella symbol of the Party which you claim to be your intellectual property.

Mom, this particular action is more hurting your image than any other fellow in the Party. By extension, however, you have equally dragged our good old father to this murky situation.

To be fair to you, Mom, I can share some of your bitterness which is well founded. I reckon the fact that some personalities who were left out in portfolio-sharing, and who were paying almost paying daily visits to you, urging a kind of rebellion, but now turned against you can be a good reason for your anger.

A lot of these instigators, who, in a way pushed you into planning to contest the president, when given political appointments, turned around to be your adversaries. It is understandable – but such lesions must only lead us to understanding the hypocrisy inherent in the mortal human being.

It must never-ever lead us into making worse mistakes in our lives. In my tribal parlance it is said “being careful next time is the best advice when a friend hurts you – but termination of the friendship should never be the option”.

So, those who urged you into it are the cause of this current fracas. But nineteen years of leadership experience is enough for you to have seen through their minds. You did not do that and this is where I am forced to believe that your inner ambition of leading this country is what propelled you into where you find yourself now – and not solely the kind of politicians I made reference to.

It is said that the leopard may be feeling shy to go hunting for food, but not when told by his in-law to help search for her missing goat. The goat can be found by the leopard but the in-law would never see it.

I am forced to see you in this light. For you had the intention and was then looking for an opportunity to come out.

Mom, you should have by now realized that you were used for a purpose. Those who are left with you now would behave the same way when given appointments. As a former First Lady, you should not have allowed yourself to be used as it stands now.

It is not too late to exit from the wedge. For you still have some reputation in you which must not be allowed to fizzle out. You, indeed, have to extricate yourself from this captivity you find yourself in.

Mom, you ought to have this moral urge in you. The old man has been able to carve a good political family in which you are the mother. He – having ruled for so many years in which people saw you as the one who also had your shoulder to the wheel till you handed over in 2000, is not satisfying to you?

The morality I am talking about here, is that have you for once as couple, thought of Ezenator, Yaa Asantewah, Amina and Kimathi. There is no way by which you can say that the political blood in you has not flowed into them.

Is it your take, therefore, that you satisfy your political lust in ruling this country and in a way – seal them off politically? This is exactly what you are doing to them. For you have made extremists supporters of my ilk begin to see some greed in you.

So, coming back to taking away your intellectual property from the party, Mom, is the most wicked of a thought you have ever harboured. But as I said, it is not too late yet, you can back-pedal – it will not portray how weak you are – but how strong you can be.

Be told, however, should you succeed, if you do not change your mind and go ahead to exact your decision of taking your umbrella symbol, it would be the end of the respect I, and I know many others have for you. We shall go ahead and campaign vigorously for the Party to remain in power.

What needs to be told you is that this year's election is indeed crucial, and the party that loses would break up. If you decide to go a different direction, it is your legitimate right – but assured, that the NDC is not in a position to lose this election, and we shall use legitimate means to win.

But, I pity the political doom you are creating for my brother and sisters. If I were them, I would weigh heavily on you to stop this self-infliction of pain you are about bringing to yourself and the entire family.

For your information, Mom, the threat of your symbol withdrawal has played into the gallery of the NPP. Oh yes! They are saying that “wo se akamanso no ye ne die, wo gye n'ade – m'on fa ma noye”, meaning “she says the umbrella is hers and she is taking it – give it to her”. They are indeed, excited because to them your action would inure to their benefit.

On the other hand people within the NDC who could not speak ill of you are now on the rampage. Even in the Volta Region, they are blaming you for turning the old man's attention during his reign to the Ashanti Region where numerous development projects took place – leaving them in the cold.

To them this regime is evenly sharing the cake thus enabling them enjoy their share, and they feel you are not happy about this improvement. They contend the last thing they will do is to abandon the NDC vessel.

Mom, let me caution you against any flirtation with the NPP. Yesterday they brought you low! Today they are pushing you up – but for a purpose! Tomorrow they will push you crumbling to the ground and they will make sure you are pinned down there for as long as no one can guess. Be careful.