Mali coup: the revenge of the rank and file 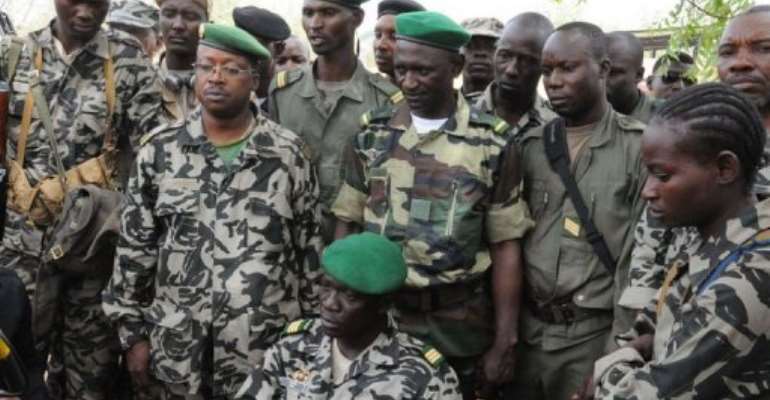 BAMAKO (AFP) - At the barracks where Mali's junta has set up camp, mutinous soldiers expressed their pride Friday at having snatched the reins of power from a leadership they perceive as incompetent.

"Yes, it's power to the rank and file," shouted one corporal, his eyes red with fatigue, as hundreds of troops lined up inside the Soundiata Keita camp, named after the founder of the 13th century empire of Mali.

Located around 15 kilometres (nine miles) north of the capital Bamako, the camp is bustling with hundreds of soldiers awaiting orders, a day after the junta announced on state television that it seized power.

Sitting on a stool, a pen in hand, the corporal patiently jotted down the names of those who request a meeting with the troubled west African country's new strongman: Amadou Sanogo.

There were no portentous generals bristling with medals in Mali's new centre of power, rather mostly low-ranking enlisted soldiers with a grudge.

Sanogo himself, who set up an office in a rundown building inside the camp, is only a captain.

A handful of "Red Berets" from the presidential guard appear to have joined the putsch and now form part of Sanogo's bodyguard.

The captain, who declared himself the leader of a National Committee for the Establishment of Democracy on Thursday, led the troops who shot their way to the palace on Wednesday evening and forced President Amadou Toumani Toure to flee.

The junta claims the rank and file was fed up with the regime's failure to snuff out a rebellion launched by Tuaregs in the north two months ago.

On Friday, around 20 soldiers guarded the location at the entrance of the camp where senior members of the ousted regime, including several ministers, were held.

"We have orders to treat them well," said one sergeant. "We will not harm them."

He did not comment on the fate of the ousted president. Sanogo only said Friday that Toure, who has not spoken publicly since the coup, was "doing very well" and in a safe location.

In the middle of a courtyard, women are cooking rice in a large pot. "This is for the soldiers. They have worked well for the country," said one of them.

Those soldiers who took part in the fighting two nights earlier were still in a defiant mood.

"The organisation of the attack on the presidential palace? That was me," Sergeant Alissa Garba boasted, brandishing his weapon. "I took over command of the operation and charged towards the palace."

The presidential guard tried to fight back on the night of the assault "but the mutineering soldiers were irresistible," said Moussa Kante, another corporal.

"We don't trust the senior officers. We're between ourselves now, the rank and file, we understand each other. It's the end of all this waste and incompetence," he said.

A few kilometres away from Soundiata Keita camp, on a hill overlooking Bamako, the vacant presidential palace lies, partly gutted by fire.

An abandoned tank and pockmarked vehicles sat in the deserted courtyard. Official stationary flapped over on a bed of bullet casings.

In central Bamako, traffic was slowly resuming despite sporadic gunfire still ringing out in the city and cases of looting by soldiers.

"I am still afraid. I have no idea what is going to happen next so I'm staying at home," said Ahmed, a nurse in the Magnambougou neighbourhood.