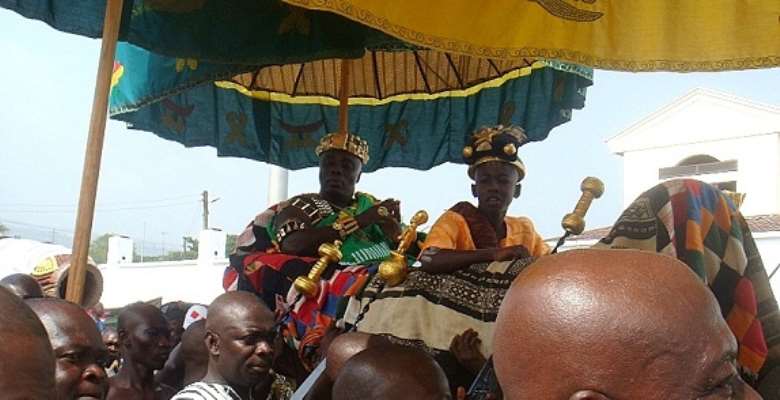 It is very refreshing and commendable of the Okyeman Council to opt for a national park than a bauxite mining when confronted with these two options with regards to the Atewa forest range reserve. This decision of the council came to light at the first state council session of the year held at the Ofori Panin Fie, the palace of the Okyenhene at Kyebi.

Indeed, the Okyenhene Osagyefuo Amoatia Ofori Panin and his council not oblivious of the benefits of mining such as increased foreign exchange earnings for the country, job opportunities for the teeming unemployed youth, boosting of the local economy among others were also not oblivious of the environmental problems concomitant with mining, and the fact that mining in the natural undisturbed Atewa range forest has a life span of only fifty five years. It is against this backdrop that the Council considers turning the Atewa forest into a national park with its numerous benefits to a bauxite mining field.

The Okyeman council under the leadership of Osagyefuo Amoatia Ofori Panin and his team of experts clearly states the benefits of a national park out of the Atewa range forest in the following paragraphs quoted from a press release from the Akyem Abuakwa State Council Secretary E. Ampofo Duodu:

“A team of local and international scientists who have conducted a series of research in the Atewa forest have confirmed that Atewa harbours one of the healthiest and most important ecological systems in the world, with the headwaters of three important rivers in the country; Densu, Birim and Ayensu, which are essential sources of domestic, agricultural and industrial water for local communities and many of Ghana's major population centres, including the capital city, Accra.

The Atewa forest, thus, protects and provides clean water sources for much of Ghana's human population and key elements of the country's biodiversity. Similarly, through the process of photosynthesis, it provides the essential environmental service of continuously recycling atmospheric carbon dioxide into oxygen. That is, the Atewa forest is one of the ecosystems that produces and cleans the air Ghanaians breathe. This makes Atewa the right lung of the entire nation. Atewa is also a major source of both traditional and modern medicines.

The exclusive biological resources or ecological benefits of the Atewa forest reserve used to be threatened by illegal logging, hunting and farming activities. The major threat today is the exploitation of bauxite deposits, which could have eternal damaging effects. For about ten to fifty years, at most, the benefits to the economy from a successful bauxite operation may include foreign exchange earnings, easing of unemployment, and stimulation of local economy. Unfortunately, there is a substantial trade-off between these immediate economic gains and the ecological balance of the nation. In other words, when the Atewa forest bauxite is mined, the permanent impact on the physical environment and, for that matter, the national ecological balance may be incalculable; and the reasons are not far fetched.

Bauxite is mainly extracted by open-cast mining, which involves clearing of vegetation and the removal of the top layer of soil in order to get at the ores underneath. This has the potential of destroying: hundreds of thousands of hectares of magnificent bio-diverse forests; habitats of exotic animals and plants; natural waterfalls and headwaters of the three river systems. In addition, as soon as the bauxite ores are mined, the land will become so caustic and completely dried out to the point that it can hardly support living things and agriculture. Besides, bauxite mining leaves behind another by product toxic (known as red dust particulate) in the air, which can have serious negative impacts on public health. What makes the remote decision to mine depressing is the fact that the bauxite identified at Atewa is classified as low grade.

It is in the light of these realities that Okyeman is advocating for the upgrade of the Atewa Mountain protection status from forest reserve to a National Park. Besides protecting the nation's ecological balance and the incredible biodiversity of Atewa for future generations, upgrading the status of Atewa to National Park will play a part in developing alternative income generation opportunities for the country and the communities surrounding the Atewa forest.

National parks serve as major attractions in eco-tourism or nature-based tourism. Thus, eco-tourism would be the most optimal industry to be developed because of Atewa's beauty, richness in species and close proximity to the capital city. Visitation, tourism, and jobs related to recreation could contribute billions of cedis to national and local economies, while creating thousands of private sector jobs. The economic benefits extend far beyond tourism. In today's economy, the greatest value of natural amenities and recreation opportunities often lies in the land's ability to attract and retain people, entrepreneurs, their businesses, and the growing number of retirees who may locate to Atewa environs for quality of life reasons.

Nananom also considered payments for ecosystem services or carbon credits, concluding that the economic values of the services provided by Atewa could be calculated and payments for these services made to the communities as a mechanism to protect the forest and watershed.

The Traditional Council is therefore optimistic that with careful planning and in collaboration with government, a National Park and an analogous management plan, compatible with both conservation and revenue generation goals, will be developed.”

Indeed, this is very thoughtful of the traditional council and I would take this opportunity to call for support from the government and other bodies to bring this to fruition.