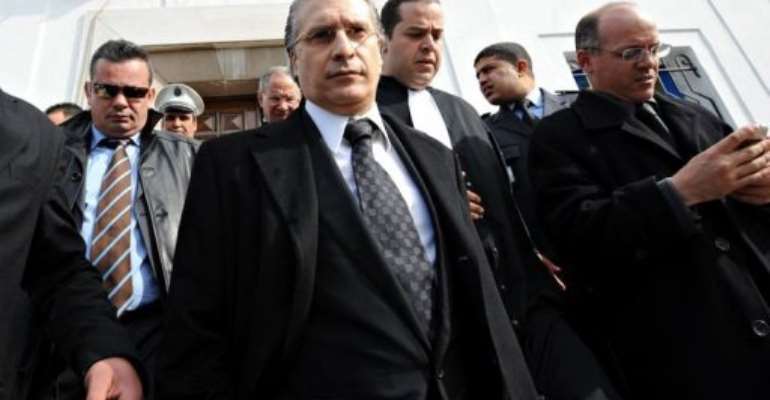 TUNIS (AFP) - The trial of the director of Tunisia's Nessma television, accused of "insulting sacred values" for showing the Franco-Iranian film "Persepolis", briefly resumed Monday in a tense climate in Tunis.

"I am sorry to be here today, this is a political trial," Nessma's head, Nabil Karoui, said on arrival. "It's the trial of 10 million Tunisians who dreamed of having a democratic country."

The court was in uproar when proceedings began, with opposing teams of lawyers shouting at each other, but then the trial was postponed until April 19.

Karoui is on trial for "insulting sacred values, offending decent morals and causing public unrest" in an affair which has led to violence and seen passions run high because a scene in the film shows God, whose representation is banned in Islam.

From 9:00 am (0800 GMT), insults flew outside the court building between those who supported Nessma and those who had it in for the channel. A group of bearded young radicals shouted "The people want Nessma closed down" and "You, media cowards, know that religion mustn't be defamed."

Their opponents argued that they were defending the freedom of expression in a trial that was a test of Tunisia's youthful democracy.

"I have come to lend my moral support to defend the freedom of expression. This is important because Tunisia is at the crossroads," Caid Essebsi said.

He helped steer the north African country from a public uprising that ousted dictator Zine El Abidine Ben Ali in January 2011 to an elected government and a constituent assembly.

Another political leader, the head of the leftwing Ettajdid party Ahmed Brahim, came to protest against the "abuse of religious sentiment".

"Persepolis" is a cartoon film directed by comic book writer Marjane Satrapi that tells the story of the Iranian revolution and the Islamic regime of Ayotollah Ruhollah Khomeiny through the eyes of a precocious young girl.

The broadcast by Nessma TV on October 7 led to a wave of anger and violence, two weeks before Tunisia's elections.

Groups of Islamic extremists tried on October 9 to attack the headquarters of the channel in Tunis and then turned their wrath on Karoui's house a few days later.

On Monday Tunisia's Prime Minister Hamadi Jebali denounced attacks on journalists, including an incident outside the court house when protesters harassed the editor of the Arabic language newspaper Le Maghreb and a lawyer.

"There is no freedom of the press without respect for the physical integrity of journalists, whatever the differences of opinion are," Jebali said.

The representative of Reporters Without Borders (RSF) in Tunisia, Olivia Gre, said the stakes were high in the 'Persepolis' trial.

"Some Tunisians are amazed to see Mr Karoui promoted to the status of champion the freedom of expression", after his TV channel never crossed Ben Ali's regime, she said.

Nessma TV, a satellite channel launched in March 2007, counts among its shareholders the Quinta Communications group of Tunisian cinema producer Tarak Ben Ammar and Silvio Berlusconi's Mediaset, and was initially set up to provide entertainment. It was open to political debate after the Tunisian uprising.

Take NPP’s money but don’t vote for them – Naana Jane to Asi...
46 minutes ago