Boko Haram: The Dilemma of Human Ignorance, Religion Fideism and Failure of Leadership 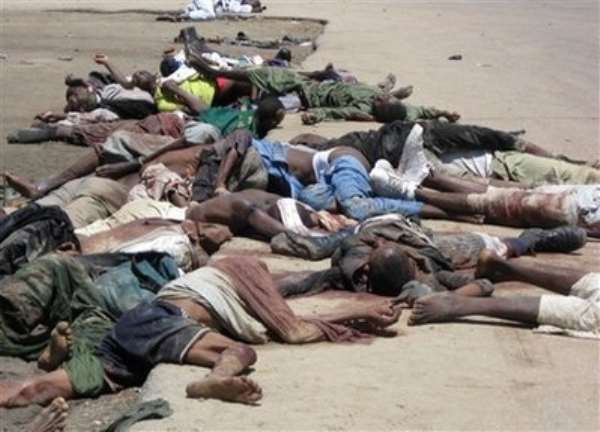 Without mincing words, I am using this opportunity to console the souls of innocent citizens that lost their lives, commiserates with the families of those who lost their loved ones and wish those injured speedy recovery from the “absurd” (according to the White House) and “senseless” bomb blasts by the islamist group called Boko Haram. It was the first bloody Christmas ever experienced by Nigerians since 1960. Albert Einstein, the German-born physicist who developed the theory of general relativity, have this to say on the life of individual. He says; “The life of the individual only has meaning insofar as it ails in making the life of every living thing nobler and more beautiful, life is scared, that is to say, it is the supreme value to which all other values are subordinate”. The idea of human society is generous, encouraging you to see yourself as living among other people, and to identify yourself as one of those people, with common purpose and problems.

Great evil is achieved by abnormal few. Therorists embrace actions that will contribute to human suffering, never give chance or opportunity to develop an egalitarian society, individual freedom, particularly freedom of thought and expression. They harm another people due to lack of intelligence choices, behavious and actions. They always pick what seems most comfortable and not what is realistic. Their behaviour undermines the civilities of ordinary life. They always result to violence which is anti-thesis of democracy. Violence is a creed of uncivilized and weak people with mental and spiritual bankruptcy. Violence is brutish. It is anti-social, anti-national and also anti-international. Undoubtedly, violence is a sin against humanity.

Faith and violence are opposite. Faith according to my little oxford dictionary is “ trust, belief especialy in religion” but this sect or cult belief is “not resting on logical proof or material evidence”. This group are set of fideists with the believe that reason cannot achieve certain kinds of truth, which must instead be accepted only by faith. They are set of people which Mencius, the Chinese Confucian-philosopher says “...act without clear understanding, to form the habit without investigation, to follow a path all one's life without knowing where it really leads-such is the behaviour of the multitude”.

Meanwhile, being very ignorant and naive of their religion ethics, they undersatood that real change can only come about through coercion or violence and not through education, dialogue and a change of heart. They don't even know that the purpose of education is to replace an empty mind with an open one from the words of Horace Mann. This set of people does not realise that all life is interelated in one way or the other. At a century when the people are working hard to change the world for a better place to live, they are turning themselves to masters of destruction. Boko Haram cult have killed more than five hundred people and injured many with their bloody bomb blasts in 2011. More than five hundred creation of God have been killed for religious reasons or excuses! People that kill other fellow human beings for any reason are murderers and should be dealt with and disciplined by the iron fist of the law.


Boko Haram have been operating and killing innocent people since 2009 and the weak central government have not found a solution to protect their citizens. The country police and security system have failed woefully. Despite huge investments in terms of votes and wages for Nigerian seven hundred and seventy-nine “think-tank” representatives, and duplicated cabinet / executive officials, who are draining the economy with their wages and allowances, have not come out with good ideas and strategies to save the lives and properties of its citizens. Armed robbery strikes today, kidnappings tomorrow, and bomb blast near the secret police headquarters next tomorrow. Everybody lives in fear in a sovereign entity. Are we not living in a state of nature where human life becomes “solitary, poor, nasty, brutish, and short” according to Thomas Hobbes (1588-1679). I hope it would not take the government again much time before realising to make positive changes in the Nigeria Police and the whole security operatives as done with the EFCC. I hope calling FIB to investigate for us will not extend to seeking just returned USA army to save Nigerians from the enemies within.

Religion is a concept of a life, love and friendship.The goal of any religious evolution is the oneness of man and man, and of man and God. Organisations with a religious background are actors and partners in relief, reconstruction and development programmes and projects Boko Haram members, to me, are not real or devot muslims. One of the ideals of muslim life is the attainment of peace on all fronts. But, this people are heartless hired therorists sponsored by disgrunted leaders to derail the foundation of democratic process in Nigeria. They are being paid for political interest. They lied to the world with fake requests of “turning Nigeria into Muslim state” and the “western education is sinful” stuff. Where would they be without western education? They have been brainwashed with the notion of Jihad (which means struggle). It is just a mission impossible for a secular nation like Nigeria to yield to those absurd requests. Haram members are doing the wrong things for the wrong reasons and at the wrong time.

Human society is to unite, organize for common goal. It is a community of human beings with different religions and cultures, showing warmth, sympathy, respect and love to each other. It is not a place where people are desperate to split blood of innocent people because of religion or political differences. A human society is to be run for the benefits of all people in all nooks and corners of a nation without fear, threat or prejudice. Human beings are the best creation on the earth as we have made progress in many areas of, science, technology, sports, arts, cultures, and so on. If the people are not save, nothing can be achieved. The country's vision to be among the league of the first twenty industrialised economies of the world by the year 2020 will be just a dream with insecurity of lives. It is only when we do the right thing, with determination combined with opportunity and intelligence, then can make things happen-in an exceptional way.

The government of every nation is established to make use of men of integrity, honesty and patriotism to integrate all social, political, economical and environmental systems in a plan for all citizen.Good leaders produce dynamic society. The government should know that when an institution beomes inactive, less and less democratic, the obligation to abide by its decisions diminishes. Nigerians will not tolerate a society with one set of safety standards for those with money and a set of inferior standards for those without.The government of a country has a responsibility to ensure the well-being and security of its citizens as well as being good steward of country's resources in all ramifications. Democracy simply means “getting things done” and not crazy for power.