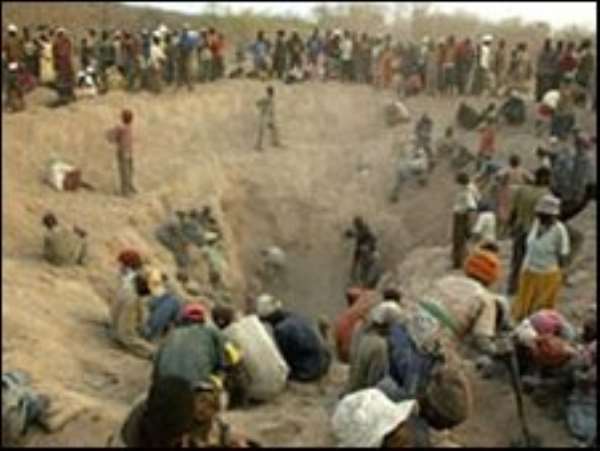 Ghana's 2012 National Budget Statement and Economic Policy proposed, among others, to bring the following changes to mining operations in the country: increase corporate tax rate from 25% to 35%; install a windfall tax of 10%; and implement a uniform regime for capital allowance of 20% for five years. It also sought to review the principle of ring-fencing to prevent companies undertaking a series of projects from deducting costs from new projects against profitable ventures yielding taxable income. This was commended by the National Coalition on Mining and the Ghana Mineworkers Union as part of steps urgently needed to improve the contribution of the sector to the economy and people of Ghana. However the Chamber of Mines have gone on the offensive, indicating that the mining sector is already over-taxed and such initiatives are only inimical to their operations. These, notwithstanding, the issue of whether these taxes are actually new – and more importantly – enough to ensure equitable distribution of Ghana's mineral wealth need to be discussed to inform reforms already underway in the sector. I offer my opinion.

Let me start with whether the taxes are new or not. The mining laws that preceded the current Act 703 clearly reveal that these fiscal measures have always been in the sector and are well-known by the industry players. Prior to the 2006 review, Ghana had the Additional Profit Tax Law, 1985 (PNDC Law 122) on her statutes, but had apparently never been applied. This law was therefore repealed in the current law that was passed in 2006. Essentially, the country had a 25% windfall tax provision until the 2006 review. This therefore makes the recent proposal of 10% windfall tax (which might be killed by the mining industry) somewhat of a mockery, given that gold prices increased three-fold (from US$600 to US$1,800) between 2006 and November 2011. This increment in gold price has not been matched with proportionate increases in operational cost, in fact not even halfway. The massive profits being made by mining companies can therefore not be in question, and the danger in the absence of measures, such as the windfall profit tax to ensure equitable distribution of Ghana's mineral wealth, cannot be clearer. This background therefore makes it economically imprudent and reckless if the government fails to implement the paltry reinstated windfall tax to the latter, given that the rate is 15% less than what it used to be a few years ago and 20% less than what Australia has recently voted for.

The increment in the corporate tax rate from 25% to 35% only takes us back to the level before the 2006 law review. As a matter of fact, the corporate tax rate on mining activities used to be 45% until a downward review to 35% in 1994 by Act 475. It only came as a shock to many Ghanaians when the 35% corporate tax for mining companies was reduced further to 25% in 2006. For some people, the further reduction in corporate tax rate in 2006 was a demonstration of the high influence of the mining industry, as well as few Ghanaians who benefit substantially from servicing the interest of these mining companies. This is particularly so because coupled with the reduction of corporate tax rate in 2006 was a reduction, in the upper royalty rate from 12% to six per cent and the abolition of additional profit tax as noted above. The return of the corporate tax rate to the pre-2006 rate of 35% has therefore not been met with considerable appreciation by Ghanaians who are keenly following developments in the mining sector. According to a report published by the World Bank in July 2011, the 25% rate charged by Ghana over the past five years has been on the lower end of the spectrum of tax rates applied to mining in resource-rich countries around the world. The upward review therefore is a move to right a five-year-old wrong.

Another fiscal initiative proposed by the budget statement was the uniform regime for capital allowance of 20% for five years for mining companies. Until this is approved by parliament, mining companies are allowed to write off 80% of what they consider as prospecting, exploration, and development costs. In this scenario, companies hardly pay profit tax because these costs, determined by them, must be deducted from their profit before arriving at taxable profit/income. This initiative is an important one, but the extent to which it will benefit Ghanaians will depend on its implementation by the bureaucrats. Already what constitute capital expenditure and the boundaries of prospecting, exploration, and development costs are unknown, allowing mining companies to use their discretion. A very worrying reality in Ghana's mining sector is that while it is reasonable to give accelerated depreciation on capitalized value of prospecting, exploration, and development costs, the depreciation laws applied in Ghana surprisingly and painfully covers all assets, as defined by mining companies, including machinery, equipment, and buildings. So until these boundaries are drawn or redrawn, opportunities exist for companies to continue evading tax, making mockery of these fiscal initiatives.

The last of the initiatives for this discussion, as identified in the budget, is a review of the principle of ring-fencing. This is aimed at preventing companies undertaking a series of projects from deducting costs from new projects against profitable ventures yielding taxable income. This is also good because until mining projects are ring-fenced, the companies can continue to evade tax provided they can start new projects – whether they are feasible or not. And such reckless investments will be financed by Ghanaians since it is at the expense of taxes payable to the country. One keeps questioning the wisdom in maintaining these overly-generous incentives used to attract mining companies in early eighties. What will even be more useful in reviewing the principle of ring-fencing is its application to Ghana's stake in mining projects. The law requires that the state must have a 10% stake in all mining projects in the country. Yet there are several mining projects in the country that the state has zero per cent stake. Besides losing revenue from dividends, it also loses a say in how these companies are operated, especially regarding their relationship with workers and communities affected by their operations. Worse of all, it is illegal.

In summary, while this reintroduction of former fiscal initiatives appears useful they are inadequate to ensure that the mining sector contributes adequately to the economy and people of Ghana. Already there is little or no information regarding the applicability of these initiatives to mining companies with stability agreements with the government, and sadly dominating the mining sector, such as Newmont Ghana Gold and Anglogold Ashanti. It is also not clear whether companies with 15-year or more tax holiday will be included. Without their inclusion, these initiatives will be of little use. Further, the bad conduct of mining firms as regards transfer pricing need to be attended to if these initiatives can be positive. The hint in the budget on addressing the transfer pricing menace must be taken more seriously. Finally, a recent publication by the World Bank entitled “Political Economy of the Mining Sector in Ghana” published in July 2011, which compliments efforts by civil society organizations such as the Third World Network – Africa, must be taken much more seriously to ensure the country transforms her mineral wealth into economic growth and development.

More Feature Article
Modern Ghana Links
The rise and fall of NDC leadership in parliamentary
What empowered Sammy Gyamfi to attack Bagbin the way he did?
Voting Isn’t Really So Important In Uganda
What is your Cause for Jubilation that Ghana is 64 Years Old today?
Will the Supreme Court continue to Proudly Apply and Interpret the Laws to all Cases as in Election 2020 Petition?
What else does former President John Dramani Mahama Need from Ghanaians?
Why this threat of “If you Dare Me….” by some Ghanaian Politicians?
Stephen Bernard Donkor: Road accident more deadly than Covid-19
Stephen Bernard Donkor: Perpetrators, Crime Fighters
Quote Reports Dossiers
TOP STORIES