The Power of an African Smile 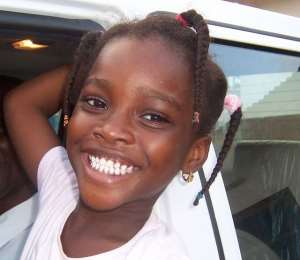 Ho, Sept. 20, GNA - Smiling is a cross-cultural language that means a lot to the African. It is magical, the only language understood by all Africans.

It comes natural to the African and does a lot of magic and healing. For some, a smile means acceptance, love, agreement and its meaning usually depends on the circumstance and occasion. It costs nothing, but worth a lot.

While in some parts of Asia people smile when they are confused or angry and others reserve smiles for close friends and family members, Africans share freely and enjoy smiles with everyone including strangers.

The African child actually does two things as soon as he or she is given birth to - cries and smiles. Any new born baby who fails to do either of the two or both is deemed unhealthy.

Adults who fail to return a smile or smiles when they are not supposed to, are also considered social misfits and punished in some traditional set-ups.

Smiles are important tools for chiefs and clan heads. They use them in resolving disputes. It is thus known in some circles as master peace broker. After resolving disputes with talks, chiefs and traditional authorities normally ask the disputing factions to shake hands and smile to each other.

As soon as this is done, it is believed that all hurts will begin to heal naturally, though slowly, leading to a peaceful resolution of the dispute.

In some cultures, smiles precede greetings and the depth of a smile tells how much one is welcomed into a house. Perhaps this kind of hearty smile is why Ghanaians are said to be very hospitable.

Raffaela, an Italian friend, once said Ghanaians are noted for warm peaceful smiles. “They are always smiling whether sad, happy or hungry and their smiles give hope,” she said.

But Ghanaians are not the only Africans who wear smiling faces and relate well to visitors.

I was nearly embarrassed by welcoming smiles in South Africa and the Republic of Togo on my visit to the two countries recently. My clothes gave me up as a fresh man in town and almost all faces that my eyes caught gave me smiles. Some of the smiles were so broad that I often looked back to find out if there was anyone behind me, only to notice that those smiles were free gifts meant for me.

On a few occasions I double checked myself to be sure there was nothing laughable about me and later got convinced I was only enjoying the rich culture of the people.

For Sevaga, a fishing community in the Republic of Togo, a stranger could easily be offended by the smiles. Every person, young and old, understands one thing-smiling and greeting. For them, these are valued ways of life, an important aspect of the African culture and nothing can stop them from smiling countless times in a day to people they come across.

Ataga Yao, 62, Chief Fisherman in that densely populated fishing community, said it is believed culturally that a good smile has magical powers that can neutralize any evil plan from the person being smiled to.

Giving a smile might seem so simple but required some art if one wants to communicate suitably. In many traditional set ups, children are taught or guided to smile in a particular way that is appealing to all. Some children get scolded for smiling in perceived unacceptable manner and situations.

In Ghana and most African countries people who visit the sick do so with smiles even if they are not happy about the sick person's response to treatment.

Some even force the sick person to smile so he or she could take the mind off the sickness momentarily. All these are to convince the visitors that the sick person is responding to treatment.

Karen Callahan, an American Psychiatrist says “smiling is a universal law which is a form of appreciation for life's little things and wondrous moments. It is also one of the easiest ways to share with others and that giving to others always creates a positive chain reaction.”

Another American, Socorro Lawas, a Psychologist says “I smile when I'm defeated after a game. It makes me say to myself, better luck next time.”

For Lawas, “A smile is a vital mark of a good loser: it is harder to lose than to win, but when I smile it's a win-win proposal for both parties that lost and won..., a smile mends a broken heart; it is a ray of hope bursting from dark clouds. Even a baby smiles in sleep to give us joy. Angels also smile their heavenly smile which they borrow from God.”

One major group of people who use the power of smile in Africa is people in the informal sector, especially traders and people in Small and Medium Scale Enterprises. You cannot survive in this business if you don't have the skill of displaying 'sweet' smiles. Even schoolchildren in lower primary who help their parents during holidays selling petty things know how to attract customers with a 'Duchene smile'.

In Lome, the capital of the Republic of Togo, many traders including people in the transport business use smiles to attract clients and increase interpersonal cooperation for increased earnings.

They have very good eyes and sharp instincts with which even from long distance they can tell who is travelling to which destination and beckon that person with an infectious smile.

This situation is not different from what 'trotro' and taxi drivers in Ghana do just that sometimes they can embarrass you with the smiles as they go the extra mile to carry your luggage and yourself into their vehicles.

Middle-aged women with beautiful cloths around their waists at Atikpodzi in Lome normally combine enticing strut, 'sweet talk' and smiling skills to virtually hypnotize one into buying their goods only to realize later that one did not actually need those goods.

It is not for nothing that most African women spend several hours in the market and many of them get confused by the several smiles calling for their attention.

I remember I once accompanied my mother to the market and I vowed never to go shopping in a market with a woman-they will roam the whole market and sometimes finally settle for the goods at the market gate.

An attempt to get a nice Kente cloth for a high profile function in my community recently took me a whole week.

I hardly could tell which of the smiles from the dealers is genuine until an old friend helped me out. What was confusing is that all weavers wore smiling faces as they drew the fly shuttle and opened the shed at the loom. The same thing happens at the carpentry, hairdressing and batik/tie and dye workshops.-Our entrepreneurs are simply ingenious.

These days, some young African guys are employing the skill to woo girls. One of the tricks is to give a broad smile to a girl walking towards you while maintaining an eye contact. “It works more than magic”, confesses Romeo Agbleze, a policeman.

John Dzotsi, an auto-mechanic, says a 'good' smile from the right corner of his mouth did the magic of re-uniting him and Philomena, his girlfriend.

Many lovers do have special kinds of smiles they exchange, suggesting how the night will be spent and there are special early morning smiles lovers share to congratulate each other for having had a lovely night. These kinds of smiles are said to be deeper than kisses and communicate important messages direct to the soul.

As a child growing up, and a naughty one too, I observed that my father found it very difficult ignoring a particular smile from my mother. I believe on a few occasions, my mother used those appealing smiles to save me from scolding from my father anytime I went wrong.

That smile, which swallows the eyeballs, spread over the face but shows only the two front teeth of my mother normally This makes my father sober and he (my father) confessed this to me just before I got married.

I don't know how my wife interprets my smiles but I know I receive 'good rewards'-sumptuous meals and other lovely and romantic 'rewards' in return.

Smiles, generally establish good rapport and harmony in Africa hence many people smile even if they are hungry and this must not be abused.

It is the commonest language on the continent, an important uniting feature that makes Africans very unique.

It establishes trust, confidence and friendship. It is a simple and easy language that can be understood by all, so always keep a smiling face with the knowledge that it is much easier to smile than frown.

Latest Photo Reports
Catch up with all the political quotes from our politicians.
Advertise here
More from Opinion
ModernGhana Links
Will Free SHS and other Policy of Government be Cancelled Now That We Are Going to The IMF?
Are the current happenings in Ghana a suggestion that the NDC has won the 2024 elections in advance and NPP should forget about it?
Dishonesty: A new core subject in many Ghanaian schools
TOP STORIES