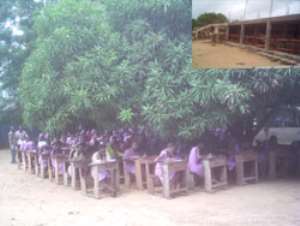 The Keta Business Senior High School (SHS) in the Keta Municipality is in a crisis situation, which calls for immediate government intervention, in order to support the school administration ensure smooth academic work, as well as promote high moral standards in the only business school at the second cycle level in the Volta Region.

The 72 year old Business SHS in the region is currently struggling to survive among second cycle institutions in the region, because the institution lacks basic facilities that would make it operate effectively.

A visit to the school however, showed that the institute would have collapsed long ago, had it not been the tactical administrative methods being used by the school authorities, motivated by the business ideals on which the school was established, with the support of the Parent Teacher Association (PTA) that serves as the pivot on which the administration revolves.

Briefing the media at Keta on the calamity that had befallen the school since the government absorbed it in 1965 as a public school, the Senior House Mistress, Madam Joyce Kpormego, said the course duration was extended from three to five years to conform with other second cycle schools at the time, but the government, up to date, was only able to provide fifteen classrooms for the 610 students.

Madam Kpormego observed that since the government provided the classrooms, which were inadequate, it had not been able to help the school to improve on its infrastructure base, a development, she stressed, was having a negative impact on the school, because the absence of basic infrastructure was affecting the morale of both teachers and students.

She pointed out that the school rented private hostel facilities for boys and girls in the community, but somewhere along the line, the owner ejected the girls, which compelled the PTA to quickly start a storey-building dormitory project for the girls. She further noted that even though the project was not complete, the girls had moved into it.

According to the dejected-looking House Mistress, the dormitory provided by the PTA was meant for only 200 girls, but as a result of the increasing population, the dormitory facility now accommodates 4350 girls, whilst the rest had found solace in private homes that had been turned into hostels in the community.

Madam Kpormego said the situation where some of the students, both boys and girls, were housed in private hostels, was seriously affecting efforts of promoting discipline, as they were not under any control, particularly, girls as young as fourteen years, who should have been under strict control in the boarding house in the school.

Madam Kpormego said due to inadequate classroom facilities, the school administration found it difficult as the classrooms were congested, and had no option than to convert the only library into a classroom.

The Volta File observed that a wooden structure had been built for the school where the first year students were seen writing their terminal examinations, with others also doing so under trees. According to her, the only source of hope for the school, after several appeals to the government to support the school with the needed facilities had failed, the PTA of the school had again, initiated a storey building project for the boys, as they were currently living in private homes that served as hostels in the town.

As if the neglect of the school shown by governments over the years was not enough, the current government, under its immediacy six unit classroom block for selected SHS, the Keta Business SHS was also earmarked to benefit from the facility, but up to date, nothing has been done, even after the school authorities had shown government officials where the building could be put up.

Madam Kpormego said one disheartening development that had affected the school's population of 1,300 students and teachers, was that the school had only an old wooden vehicle, popularly called 'bone-shaker,' to transport them to inter-school programmes and for every school activity, and that an application for one of the new buses being distributed to schools, also was denied them, but all the SHS in the Keta Municipality were provided with these new buses.

Some of the students, who pleaded anonymity, blamed the government for discriminating against the school, and sympathised with the new Headmaster, Mr. Afetorgbor, who they claimed, was only two weeks old in the school, because he would have to adjust himself to staying in a rented house in town just like other teachers do, and take a taxi to and from the school.