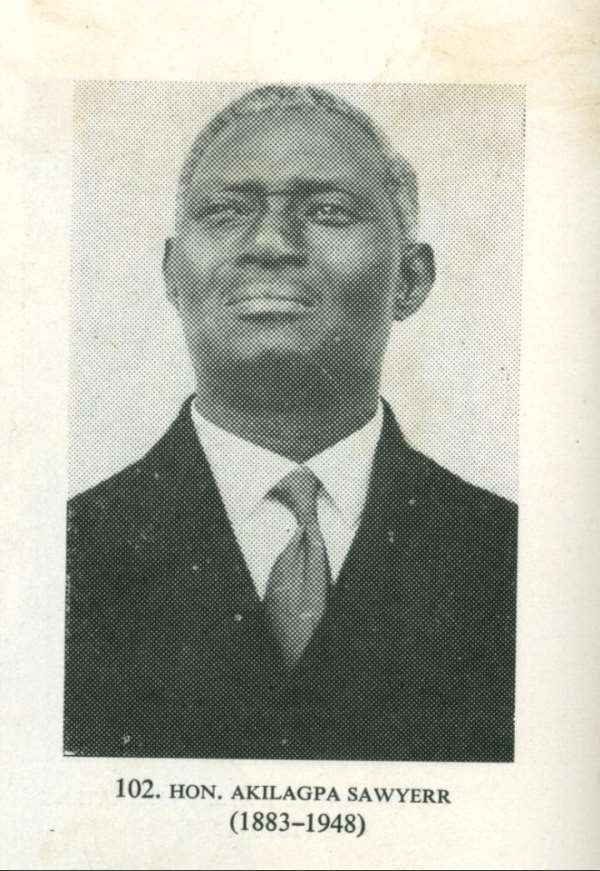 And so rightly too did Demades, the Greek author, in his writings refer to modesty as “the citadel of beauty and of virtue”.

For many a great man of the older generation unlike those today showed a much greater sense of modesty and humility in the course of serving their nation and race. One of such distinguished patriots of the Gold Coast is the subject of this sketch – THE HONOURABLE AKILAGPA SAWYERR of Accra.

“Mr Sawyerr had been a great power for good in the municipality of Accra and in the Gold Coast as a whole for at least the past thirty years but one significant thing is this:

“For all the years that Mr Sawyerr laboured for the political advancement of this country whenever it came to the question of election to the Legislative Council he would either put up the late Hon. J. Glover-Addo or his devoted friend the Hon. F. V. Nanka-Bruce and keep in the background…it was with great difficulty that his friends were able to convince him to stand election to the Legislative Council”.

This is the mark of a great man, who both in private and in public life had a golden record and a rich background.

Born on March 2, 1883, the third son of the late Mr. J. W. Sawyerr, one of the earliest merchant-princes in the Gold Coast, and the late Madam Christiana Kwaley Sawyerr, a member of the Royal family of Owooman, Faase, in Gbese Division of Accra, the late Akilagpa Sawyerr was educated at the Wesleyan Mission School, Accra. He subsequently continued at the Wesleyan (Methodist Boys' high School, Freetown, Sierra Leone, which he completed with distinction.

Thereafter, he entered the Fourah bay College, Freetown, Sierra Leone, and on completing his studies after gaining his Bachelor of Arts Degree in 1904, he proceeded to Britain for further studies. After a couple of years' studies at Durham University, he enrolled as a student of Lincoln's Inn in 1907.

He returned to the Gold Coast the same year, and set up his Chambers-Akilagpa Chambers. Throughout his career, he was in private practice, and distinguished himself as one of the most outstanding lawyers of his day.

Apart from sports and games in which he showed a great deal of interest, he was exceedingly sociable. The part he played in encouraging the playing of cricket, lawn tennis, billiards and croquet throughout the length and breadth of Accra is very well known to many sports-fan – even of today.

At one time, he was the manager for the Gold Coast International Cricket Team which played against Nigeria, and was the founder of the Tudu Lawn tennis Association, Accra. He was chairman of this association for several years.

As practical teacher of sports, he inculcated the spirit of sportsmanship among the youth of his country. He was also known as one of the founders of the Accra turf Club, and had his own race horse named “Kaiser” which won many cups and trophies.

As a foundation member of the then roger club, a Society Club in Accra in the twenties, he became chairman for some time, and put the club on a higher footing by elevating its literary programmes.

Mr Sawyerr was also a patron of many societies and clubs; he was a patron of both Accra Hearts of Oak Football Club and the Standfast Club. At his own expense, he ordered jerseys for these two Accra soccer teams, and contributed a lot of money to assist them whenever they called upon him to do so.

At the centre of Accra was his residence – Christiana House, which was the venue for Masqueraders at Christmas-tide. He was the chief patron of the Masqueraders Association of Accra, and a prominent member of many voluntary associations including the Gold Coast Red Cross.

But perhaps it was in politics apart from the legal profession that he became very much known. He was an original member of the National Congress of British West Africa at the inauguration of which at the Roger Club in 1920, he led the discussion on Judicial Reforms in West Africa.

In 1927, before the promulgation of the Guggisberg Constitution, he worked tirelessly on many constitutional committees. He advocated the acceptance of the proposed Municipal Councils Ordinance which would have given Accra a mayoralty.

He was not a renowned author, but a forceful writer. As a pamphleteer, he engaged himself in educating the public about the significance of the Guggisberg Constitution. In one of his pamphlets entitled “the Forthcoming Legislative Council elections and the Candidates for Accra”, he explained the loopholes and defects of the new constitution, and warned his countrymen to guard themselves against the impending dangers.

In local government politics, the late Mr Sawyerr was for many years a Councillor of the Accra Town Council, and served on many of its Committees. He was legal adviser to several divisions of the Ga (Accra) paramountcy, including the Teshie, Labadi, Nleshie, Gbese, Asere and Osu.

Mr. Sawyerr was elected first Honourable Member of the Accra Municipal Council to the Legislative Council of the gold Coast, and for many years held that office.

For all his achievements, he was very modest, and it was this characteristic that made him popular among his countrymen and the rest of his race.

Many-sided obviously were his activities, and despite his increasing age and waning health, he worked very hard for the advancement and progress of his country. An end had to come, and on the 13th December, 1948, this great son of Africa was snatched away by cruel death amidst great sorrows – at the crucial period in the political and economic history of the Gold Coast.

Ade Sawyerr is partner in Equinox Consulting, a management consultancy that provides consultancy, training and research that focuses on formulating strategies for black and ethnic minority, disadvantaged and socially excluded communities. He also comments on social, political and development issues. He can be contacted by email on [email protected] or his blog at http://adesawyerr.wordpress.com.

Fuel price increases: Akufo-Addo, Bawumia callous about the ...
46 minutes ago

Cape Coast Airport will be constructed at all cost - Akufo-A...
46 minutes ago