90% of Ghanaian children in 'orphanages' still have parents 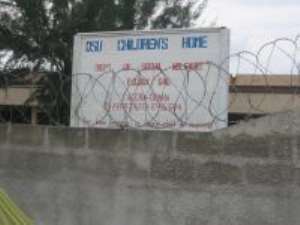 A new report from Save the Children reveals that in many countries four out of five children in 'orphanages' still have a living parent. The proportion is even higher in some countries. In Central and Eastern Europe almost every child in an institution - 98% - has at least one living parent. In Indonesia that figure is at 94% and in Ghana 90%.

Orphanages with very little supervision has become a money-making venture for some in Ghana. The fact that 90% of children in institutions have one or more parent alive is seen as reflecting the suspicion that the homes are set more to cater for the economic needs of the caterers than kids in need. Again in Ghana, the number of homes has increased from ten in 1996 to more than 140 in 2009.

This means that millions of children are unnecessarily at risk of the dangers of living in institutions, including rape, exploitation, trafficking, beatings, torture, and psychological harm. Children are also likely to experience the trauma of being separated from parents who, with the right support, could look after them at home.

Eight million children are estimated as currently living in orphanages and other institutions but the actual number may be much higher because many are not registered. Poverty is the main reason children end up in institutions, rather than the death of a parent. For poor families, putting their children in an institution can be the only way to cope, particularly when shocks like natural disasters, conflict, illness or family breakdown compound the problem of poverty.

In some countries, orphanages have become big business, as the people who run them are often given financial incentives by governments or well-meaning donors. Save the Children's report warns that this has contributed to the number of orphanages rising dramatically in recent years, particularly in Africa and Asia. For example, there are 11 times more orphanages in Liberia now than 20 years ago. This in turn can lead to the active recruitment of children to fill the orphanages by unscrupulous owners who use promises of education and a better life to lure poor families into giving up their children.

Corinna Csaky, Save the Children's Child Protection Advisor and author of the report, said, "It is a myth that children in orphanages have no parents. Most are there because their parents simply can't afford to feed, clothe and educate them. Mothers and fathers are forced to make the agonizing decision to put their child in an institution in the hope that they will have a better future."

Save the Children's report highlights that children who grow up in residential care homes are more likely to suffer from stunted growth, behavioural problems and have a lower IQ than those who are raised at home or in a foster family. Younger children under three years old face the risk of permanent damage to their brains and bodies as the impact that life in an orphanage has on them is irreversible once they reach a certain stage of development. Children with disabilities are at an increased risk of such abuse in institutions.

David Morley, President and CEO of Save the Children Canada, said: "I have worked in children's homes and I know that kids are best off living with their parents. But children around the world are languishing in orphanages because parents can't afford to pay for their food, clothes and education. It's outrageous that children are separated from their families when they have parents who, given a bit of help, could look after them. I believe that families around the world should be supported to stay together and more needs to be done stop children being put into care unnecessarily."

To tackle the overuse and misuse of residential child care, Save the Children is asking governments and those who work in or fund orphanages instead to channel their resources into projects that support families to look after their children at home or in the community. The design and delivery of national and local childcare and protection systems must be transformed in many countries to enable families to look after their own children, and to ensure that, where necessary, children have access to better care alternatives. The charity is also calling for stricter monitoring of institutions and more awareness-raising amongst communities on the importance of family- and community-based care for children.

Country Examples
- Indonesia: In the aftermath of the 2004 tsunami, there was a widespread misconception that an exceptionally high number of children had been orphaned in Aceh so the government quadrupled funding to orphanages. Save the Children now says that 97.5% of the tsunami orphans in Aceh were actually put there by families pushed into poverty by the tsunami. The number of homes has at least doubled within the last decade and may even have quadrupled.

- 98% of children in institutions in Central and Eastern Europe and former Soviet Union countries have one or both parents alive.