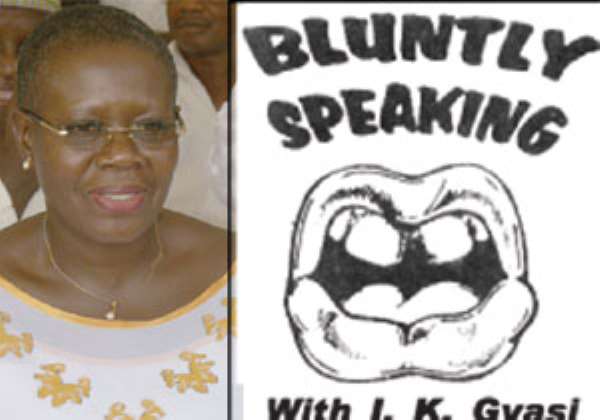 LET IT be stated, for the record, that Madam Akua Sena Dansua is currently the Minister of Women and Children's Affairs.

Madam Dansua recently let fly a bolt of anger at advertisers for what she perceived to be the negative portrayal of women in advertisements, in contrast to the positive presentation of men.

I was bemused by her criticism, because I felt that it was misdirected. Why should she attack the advertisers? Why not the women, who, for whatever reason, monetary or psychological, willingly bring themselves forward to be used in the advertisements?

I have had occasion to state that vanity is one of the failings of both men and women.

It is generally the case that men take great pride in their raw physical strength, their muscular build, their wealth and, above all, their sexual virility.

Men want to be able to boast that they wear the best clothes, own and drive the latest model or the latest make of a car, take their children to the best schools and wine and dine women at restaurants with above-the-roof prices. Yes, men are vain.

Women match men boot for boot when it comes to a display of vanity, except that they (women) show their vanity in different forms.

In our country today, the latest craze is for women to emphasise the size of their breasts, by pushing them up in tight-fitting bras and exposing generous portions of these breasts to public view. Some even apply layers of cream or gel to draw attention to what should be hidden.

I have always felt that American and European-style jeans are not suitable for some of our women who have big bodies, big thighs and blubbery buttocks.

Unfortunately, these women also wear these jeans that vulgarly emphasise these portions of their bodies, and make them appear voluptuous. I am sure they take pride and satisfaction in knowing or even thinking that they have become objects of attraction.

Women choose to expose their thighs by wearing the skimpiest of mini- skirts. Occasionally, elderly women who ought to know better, imitate the young girls by wearing minis.

You know the term “apuskeleke”, the type of jeans favoured by some of our young female students on our campuses. Do these future mothers care about the disapproval that greets them when they expose underwear and waist beads as they walk about?

Are the “apuskeleke” jeans not also known as “I am aware”?

Have you also noticed how our women deliberately draw attention to themselves by the way they flaunt their generous buttocks about, as they walk like ducks?

You would think that our universities and other tertiary institutions have become breeding or training grounds for beauty contestants.

Let any individual or organisation arrange a beauty contest, and you can bet your last pesewa that an overwhelming majority of the contestants would be from our universities, polytechnics or other tertiary institutions.

Quite recently, a daughter of Madam Dansua graduated from medical school. I want to hope that the young lady did not waste her time chasing after a beauty crown, but rather chose to concentrate on her studies for a more enduring laurel - a medical degree. I congratulate her.

Of these contests, stories are told of some contestants having to give sexual favours in order to be considered for a prize. True or false?

There is the pretence that the contest is not just about beauty of face or body, but about brains too. Bunkum, pure rubbish. You remember the early days when the contestants had to wear bikinis and swimsuits that virtually left nothing to the imagination. Popular outcry seems to have introduced some modesty into the dressing. Still…

Let me respectfully remind Madam Akua Dansua that there is no law in this country which forces our women to dress in that shameful manner they call fashion.

There is no law that forces women to be used in advertisements that reportedly portray them as not having any positive aims and objectives in life.

Nobody should tell me that they have to do it because they have no jobs. In that case, neither Madam Dansua nor any other person should complain if our women choose to cheapen and demean themselves.

Will Madam Dansua's doctor-daughter ever degrade herself by allowing herself to be used in that advertisement that shows her or other women negatively?

If it is of any interest to the Minister, let me state that I too have serious reservations about some of the advertisements on radio, television and in the newspapers.

I hate the claims by some herbal clinics about their ability to cure every conceivable ailment. I hate the pornographic songs and dresses that make our women come out practically nude. I hate the excessive advertisement on alcohol, especially the type that uses young persons to extol the potency of so-called bitters.

But hey, Madam, as I said at the beginning, your anger is misdirected. You must rather strongly advise your fellow women to desist from allowing themselves to be used.

Tell them how you did not reach your present position by wearing skimpy dresses in pornographic advertisements. Tell them how you trained as a journalist, how you struggled to become a Member of Parliament, instead of the place being given to you on some nebulous idea of affirmative action, and how you came to be a Minister.

Tell them how your daughter also made headway as a newly-qualified medical doctor by working hard at her books, instead of trying to make cheap money by exposing herself in music video clips.

When women hear the remark that they are their own worst enemies, some of them become angry. But, let them look at themselves, and how they are ever-ready, at the drop of a pin, to expose themselves to all kinds of indignities.

What our women should fight for is not affirmative action or the freedom to dress how they like. All they need is equal opportunity to advance in fields of their capability, as proved by Madam Akua Sena Dansua and her daughter.