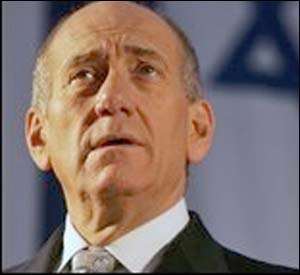 Mr Olmert has been embroiled in a number of corruption scandals but denies any wrongdoing in all the cases.

The former head of the Kadima party was replaced as prime minister by Likud leader Benjamin Netanyahu following general elections in February.

The series of probes was a key factor in Mr Olmert's resignation last year.

The charges relate to the periods when Mr Olmert was mayor of Jerusalem and a cabinet minister, but before he became prime minister in 2006.

On Sunday he issued a statement through a spokesman that said: "Olmert is convinced that in the court he will be able to prove his innocence once and for all."

Talansky case
The office of Attorney General Menahem Mazuz confirmed in a statement he had decided to press charges and that the charge sheet had been presented on Sunday in Jerusalem district court.

One of the charges against Mr Olmert is that he accepted cash envelopes from US businessman Morris Talansky with sums amounting to hundreds of thousands of dollars.

Mr Olmert admits taking money, but insists the funds were legal donations to help his campaigns for re-election as mayor of Jerusalem and for the leadership of the Likud, his former party.

In the second case, Mr Olmert is accused of duplicating funding for his trips abroad.

Police have said they suspect the "considerable sums" that remained after the travel expenses were paid for were transferred by Mr Olmert to a special account his travel agency administered for him. BBC