Israel soldiers speak out on Gaza 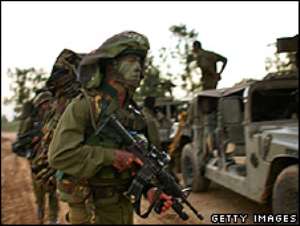 
A group of soldiers who took part in Israel's assault in Gaza say widespread abuses were committed against civilians under "permissive" rules of engagement.

The troops said they had been urged to fire on any building or person that seemed suspicious and said civilians were sometimes used as human shields.

Breaking the Silence, a campaign group made up of Israeli soldiers, gathered anonymous accounts from 26 soldiers.

Israel denies breaking the laws of war and dismissed the report as hearsay.

"We were told soldiers were to be secured by fire-power. The soldiers were made to understand that their lives were the most important, and that there was no way our soldiers would get killed for the sake of leaving civilians the benefit of the doubt," said one soldier in the report.

"People were not instructed to shoot at everyone they see, but they were told that from a certain distance when they approach a house, no matter who it is - even an old woman - take them down," said another.

Many of the testimonies are in line with claims made by human-rights organisations that Israeli military action in Gaza was indiscriminate and disproportionate.

Amnesty International has accused both Israel and Hamas of committing war crimes during the 22-day conflict.

Israeli officials insist troops went to great lengths to protect civilians, that Hamas endangered non-combatants by firing from civilian areas and that homes and buildings were destroyed only when there was a specific military need to do so.

'Ill discipline'
According to testimonies from the 14 conscripts and 12 reserve soldiers:

Rules of engagement were either unclear or encouraged soldiers to do their utmost to protect their own lives whether or not Palestinian civilians were harmed.

Civilians were used as human shields, entering buildings ahead of soldiers

Large swathes of homes and buildings were demolished. Accounts say that this was often done because the houses might be booby-trapped, or cover tunnels. Testimony mentioned a policy referred to as "the day after", whereby areas near the border where razed to make future military operations easier

Some of the troops had a generally aggressive, ill-disciplined attitude

There was incidents of vandalism of property of Palestinians

Soldiers fired at water tanks because they were bored, at a time of severe water shortages for Gazans

The report says Israeli troops and the people who justify their actions are "slid[ing] together down the moral slippery slope".

"This is an urgent call to Israeli society and its leaders to sober up and investigate anew the results of our actions," Breaking the Silence says.

Israel said the purpose of the 22-day operation that ended on 18 January 2009 had been to end rocket fire from Gaza aimed at its southern towns.

Palestinian rights groups say about 1,400 Palestinians died during the operation. Thirteen Israelis died in the conflict, including 10 soldiers serving in Gaza.

According to the UN, the campaign damaged or destroyed more than 50,000 homes, 800 industrial properties, 200 schools, 39 mosques and two churches.