The Lord Is In His Holy Temple 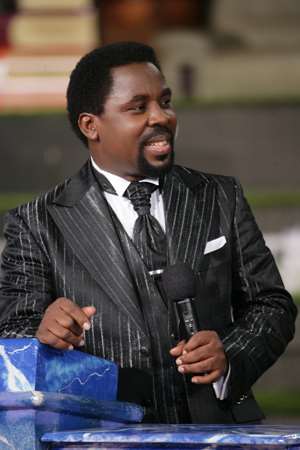 Our attention has been drawn to a recording in which one Mr Agomoh, formerly of The Synagogue Church Of All Nations (SCOAN) made some unfortunate comments about our revered General Overseer, Prophet TB Joshua.

We might have willingly ignored this baseless vituperation, but for the need to set the records right and warn against unnecessary wrangling in the Christendom. Lies and wrangling constitute tools of the enemy, the devil, to cause tension and disaffection among the children of God. It is necessary as well to point out that the campaign of calumny of the nineteen-nineties, against Prophet T.B. Joshua and The SCOAN has long been justifiably consigned to the dustbin of history as millions of viewers across the globe watch the content and mode of worship at The SCOAN regularly through the Emmanuel TV network in the first instance. Reputable television networks such as TBN, AIT, Silverbird and others also show the worship at The SCOAN. The crusades of Prophet TB Joshua in various parts of the world – Singapore, Indonesia, Botswana, Korea etc. have also exposed the trickery and delusion of the aforementioned campaign calculated to shackle the true move and outpouring of the Spirit of God and maintain the status quo. One may wonder what status quo - the status quo of paying lip service to the teaching and practice of the gospel of Jesus Christ; the status quo of fleecing the flock whom Jesus Christ persistently instructed Peter, and by implication all his disciples, to feed; the status quo of living in stupendous wealth and pleasure while the flock live in abject poverty and sicknesses of all types.

The ministry of Prophet TB Joshua was and is still different. In this ministry, the Word of God is preached with power and God confirms His Words with numerous (uncountable?) signs and wonders as He promised in the Holy Bible. The sick are healed at the mention of the name of Jesus Christ, the poor, the needy, the widows, fatherless, orphans etc all are gathered in and shown spectacular acts of charity. At The SCOAN, works of charity cut across racial, ethnic, religious, denominational and all other supposedly delimiting circumstances. It became clear that God has raised for the world a great Prophet to show His undying love, care and affection for humanity. A great light has shone, exposing darkness in all its ramifications. Satan has lost out again.

Then followed a re-enactment of the escapades of the scribes and Pharisees. There were ferocious attacks from some who hitherto considered themselves the 'wielders of the conch' in the teaching of the law and the gospel. Some of these teachers hardly bore or displayed any fruits of the Spirit. All that was needed for them was prancing around the podium, quoting the Bible from Genesis to Revelation, randomly pulling out words or phrases from the Bible for etymological rather than spiritual exposition and other such superficial presentation of the words-indices of the 'errors of the rendering'. All this, compared with the soul lifting, power-packed sermons of Prophet T.B. Joshua and the astonishing miracles, paled into significance and necessitated a re-think among the flock of various ministries and the world at large. The ensuing uproar was deafening – who is TB Joshua? Where did he study? Who mentored him? Is he not using marine spirit powers? The questions appeared endless. Various lies were concocted and widely spread, by these ferocious wielders of the conch and apostles of the 'errors of the rendering'. They could not humble themselves to think earnestly about the life of our Lord Jesus Christ whom they said they preached. If they did, they would have seen the futility and deceit of their terribly unwholesome and spiritually dangerous posturing.

Mr Agomoh is infinitesimal in terms of rating when compared with many of these interesting guardians of the gospel, in that era of the 'errors of the rendering' that preceded the arrival of Prophet T.B. Joshua. While we are by no means saying that the era is over, we are saying, for the avoidance of doubt, that their devilish campaign has been wantonly exposed and defeated by God's mighty presence at The SCOAN and tremendous support of His anointed servant, Prophet TB Joshua. The whole world now know better about the ministry. Agomoh and his co-travellers have come a bit too late on the scene for their shameful display. One could argue that Agomoh's confidence in his ability to blackmail the revered Prophet and blaspheme God, could be hinged on the fact that he was considered an insider, having been a worker in the ministry. We must not, however, forget the experience of our Lord Jesus Christ who was betrayed by one of His disciples. Such betrayals are replete in human history and even captured in the works of art. Some of us would readily remember Shakespeare's Julius Caesar and the phrase '…and you too Brutus'.

Mr Agomoh was raised from the rubble, as it were, to serve the Living God in the ministry. He witnessed great miracles of healing, deliverance etc. performed by our Lord Jesus Christ using Prophet T.B. Joshua as His instrument not for one, or two years but for virtually a decade. Yet for reasons best known to him and his sponsors, he decided to deny the great works of God and declare them fake. Hundreds of thousands of people from across the world have benefitted from God's outpouring of His Spirit at The SCOAN through His servant, Prophet TB Joshua, and of course, testify, to the genuineness of the miracles they received from God. God is not the author of falsehood.

Agomoh claimed he bought four wheelchairs for Prophet TB Joshua and gave the impression that all that happens in the healing of cripples, cancer patients etc. at The SCOAN is stage managed. May God have mercy on his miserable soul. We know that it is a terrible thing to fall into the hands of the Living God. One would have wondered if it was Agomoh who bought wheelchairs for Mr Westerhof who was brought in from Holland and healed of multiple sclerosis; and the wheelchairs for those healed during Prophet T.B. Joshua's crusades in Singapore, Indonesia etc. Perhaps, he also brainwashed them to get into the wheelchairs.

Perhaps, in support of Agomoh and his likes, one Bayo Ajede who also had the privilege to witness the great work of healing by our Lord Jesus Christ at The SCOAN, came up with a condemnation of the Prophet of God. He declares in The Westerner Magazine, “He is anti-Christ”. Bayo Ajede claims to be a pastor. He probably has a flock of worshippers, some genuinely seeking to be fed with the true Word of God. But alas! What do they get? They get nothing but the products of spiritual indigestion from a restless, roaming soul. What a pity!

Perhaps we need to throw some light on this expression 'anti-Christ' which many a deluded pastor has today misused to serve their selfish interest. 'Anti' always means 'against'. Anti-Christ then simply means against Christ. Can somebody who heals, delivers, counsels through impeccable prophecies in the name of Jesus Christ, be an anti-Christ? No! It is true the Bible warns against false prophets who would perform mighty miracles at the end time, but God also did not leave us in any doubt as to how to know them. The Word of God says by their fruits you shall know them; and of course their prophecies cannot be true.

But today, what do we have? Errors of the rendering. Miracles – genuine, wholesome and lasting, performed in the name of Jesus Christ; prophecies – impeccable, in their verification are all termed works of an anti-Christ or a false prophet because such miracles and prophecies do not happen in our ministries/ churches. Rather, people who have severally given false, unfulfilled prophecies to their country men and women, and by implication the world are embraced and lauded as servants of God in stark contradiction of the Word of God (Deuteronomy 18:22). The book 'What The Future Holds' by Prophet TB Joshua shows the pattern of divine prophecies - unchangeable events and those changeable through supplications to God and fulfilment of His charge on the issue, since for every situation, God has something to say. Those events that He will avert, He also declares and gives instructions regarding what to do; consequently leaving no room for false unfulfilled prophecies, which are the devil's constructs.

It is this crop of 'servants of God' with spiritually unproductive ministries, believing in their self-delusion that the Kingdom of God is in words not in power that find questionable characters ready tools for the dissemination of blasphemies aimed at truncating the effective spread of the gospel, thereby leaving the flock helpless in the face of satanic aggression through sicknesses, demonic possession, penury and the like. Who then is the anti-Christ? Who then is the false prophet?

All the children of God must be very careful not to mistake the mantle for the monk or observe form more than the power. We must always pray fervently that God should lead us by His Spirit to discover ourselves and others too. For we believe that any true seeker of Christ would find Him, not in the verbiage of reckless condemnation of churches/ ministries but in true humility and appeal for God's grace and wisdom.

Let all return to God. Let Him direct us through His Word, for God does nothing without His Word. Let us eschew spiritual arrogance whereby we judge for God who is serving Him and who is not; for the Lord is in His Holy temple, the Lord's throne is in heaven: His eyes behold, His eyelids test, the sons of men, the Lord tests the righteous but the wicked and the one who loves violence, His soul hates (Psalm 11:4-5). Let us also ponder over the words of Gameliel as he cautioned his countrymen who were violently aggressing the disciples of Christ as follows, 'And now I say to you to keep away from these men and let them alone for if this plan or this work is of men, it will come to nothing. But if it is of God, you cannot overthrow it lest you even be found to fight against God” (Acts 5:35-40).

Let genuine Christians concentrate on the true teaching of the gospel and effectively commit themselves to Christ Jesus so that He will confirm their teaching with miracles, signs and wonders as He promised in the Scriptures. We must see it as our duty to acknowledge the goodness of God anywhere and at any time. We cannot build up our ministries or propagate the gospel through blasphemous campaigns targeted at other ministries, churches or even other religious organizations. However, we note that all shall give account of what they have said or done at the point of judgement by God. For Mr Agomoh and his group, we say – may God be our judge.

We hereby strongly disassociate ourselves from all Mr Agomoh's claims and blasphemies.

Finally, we seize this opportunity to heartily congratulate our internationally acclaimed servant of God, Prophet TB Joshua (OFR) on the occasion of his 46th birthday on June 12, 2009. We wish him many happy returns of the birthday. God is his strength. WE say to this special instrument of the Most High God: 'The Lord will fight for you… go forward' (Exodus 14:14-15)