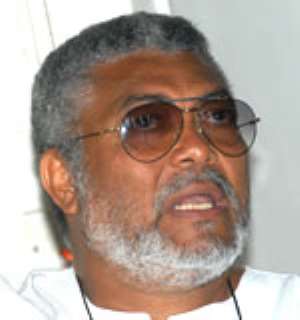 Exactly 30 years ago, a group of revolu­tionary minded young officers and men of the Ghana Armed Forces led by Flt Lt Jerry John Rawlings seized the political reins of the coun­try, then under the Supreme Military Council (SMC II) to purge the society of social, eco­nomic, moral rot and decadence.

It was also intended, by the regime to estab­lish the principles of probity, accountability and transparency to facilitate the resuscitation of the economy and ensure the social renewal of the Ghanaian society which had become faceless in the comity of nations across the world.

Although the military interregnum was short­-lived, the Armed Forces Revolutionary Council (AFRC) with Fit Lt Jerry John Rawlings and the then Captain Boakye Gyan as the principal char­acters and which handed over power to the Peo­ples National Party (PNP) under the late Presi­dent Dr Hilla Liman, left an indelible imprint in the sands of Ghanaian history.

"The House Cleaning Exercise" undertaken by the AFRC which was supported by the rank and file, members of the public, especially the student bodies, touched all the facets of public institutions and security apparatus which were really moribund and infested with massive corruption and neglect.

There were several objective conditions which precipitated the June 4 Uprising which took place at a time that the Ghanaian Military Establishment and their civilian collaborators had bled the country white for over seven years and had blocked all access to free ventilation of ideas and opinions by sections of the public.

The move was carried out by the junta in order to perpetuate their rule and prevent public dissent and disapproval of their obnoxious and devious policies and which had transformed the broad masses of the people into paupers in the land of their birth.

Between January 13, 1972 and June 4, 1979, Ghana, which was being ruled by the National Redemption Council (NRC) under the Chair­manship of the then Colonel Ignatius Kutu Acheampong which overthrew the civilian government of the Progress Party (PP), had metamorphosed itself into the SMC 1 and SMC II and constituted themselves into a looting brigade of the country's resources.

The economy of the country at the time of the uprising had deteriorated to indescribable levels due to the intransigence of the Acheampong and Akuffo juntas which refused to honour the country's external debt payments that made it extremely difficult for the establishment of letters of credit for the importation of commodities and capital items needed for the development of the country.

As a result of the unhelpful posture of the military regime, sectors like transportation, agriculture and telecommunications witnessed appreciable decline. There was artificial shortage of basic items like sugar, rice and milk across the country which fuelled unparalleled smuggling and the astronomical hikes of tne prices of such commodities, yes, those were the days of "KAL-­ABULE AND GYINABU"

In those days, one could use more than five hours to travel from Agona Swedru to Cape Coast due to the bad nature of the roads which had not seen any form of rehabilitation since the First Republic under Dr Kwame Nkrumah. Telephone services from Bolgatanga to Sogakope had virtually come to an abrupt halt, while port services were nothing to write home about since facilities were at the point of disrepair.

In addition, there was also a massive clamp down of the media through the Newspaper Licensing Law decree which empowered the NRC and the SMC 1 and SMC II to licence the opera­tion of any newspaper in the country. In effect, only newspapers which were sycophantic of the government were allowed to operate while those which had become harsh critics of its policies were forced to operate underground for fear of heavy-handed reprisals from the government.

The decision of the then regime to suffocate the will of the people, especially by the Acheam­pong NRC and SMC 1, which organised a bogus referendum of his novelty type of national government christened the "UNIGOV" led to the staging of a palace coup by his able lieutenant, the late Lt. General F.W.K. Akuffo.

There was also the emergence of civil society groups which fought unceasingly against such unctuous actions of the regime and their spine­less cohorts.

The political temperance of the army's integrity and chain of command and the leading of ostentatious lifestyles by the ruling military junta, led to agitation and unrest within the ranks of the Ghana Armed Forces, especially the lower ranks.

The Ghana Armed Forces had always resisted with considerable force attempts by ruling establishments to interfere with its organizational structure and moreover, treat them with arrogance and contempt. One of the reasons stated by General Albert Ocran and Akwasi Amankwa Afrifa, members of the National Liberation Council (NLC) for exiting the administration of Convention People's Party (CPP) was that "Our clothes were in tatters,we had no ammunition and the cost of living was hard for the ordinary soldier. In addition, the Nkrumah regime treated us in the army with arrogance and contempt".

The regime of Acheampong and his quisling Akuffo witnessed arbitrary promotions, transfers and demotions which did not go along with large sections of the army. Moreover while the council members rode the best vehicles and had unlimited opportunities for progress at their dis­posal, the other ranks wallowed silently in abject poverty.

The three months rule of the AFRC was swift, brutal and decisive. A number of army generals, including Acheampong, Akuffo and other high ranking military officials like Odartey Wellington, Kotei, Amedume and Afrifa lost their lives in what could be described as "house cleaning" in the military.

Courts which were set up by the regime also found several people guilty of crimes like hoard­ing of essential commodities such as milk and sugar, over and under invoicing, and sentenced them to various terms of imprisonment.

The security apparatus was not spared. A number of personnel were either sacked or demoted in rank when committees found to their chagrin that their operations were strewn with massive corruption.

There were excesses during the regime of the AFRC when some security personnel took the law into their own hands, harassed and intimi­dated people they disagreed with.

The June 4 Uprising now belongs to history but the question is, are the tenets which led to the uprising being upheld by Ghanaians or have been consigned to the dustbin of history?

Today, have we as a people striven to reduce to the barest minimum, social and economic vices like over-invoicing, under-invoicing, embezzlement, ineptitude, graft, nepotism, favouritism and greed? You are your won judges!