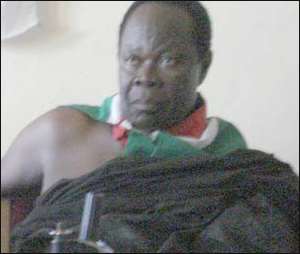 Daniel Ohene Agyekum THE NATIONAL Democratic Congress (NDC) Ashanti Regional chairmanship race is expected to be exciting as four kingpins in the party have expressed interest in contesting the coveted position.

Though a date for the regional elections has not been fixed yet, these party stalwarts have already indicated their intentions and are said to be working diligently to win the support of both party members and the Electoral College.

Last Monday, Alhaji Saanie led a group calling itself the 'winning team' to publicly announce their intention to contest the various regional executive positions at a press conference held at the SSNIT conference hall in Kumasi.

He declared there that the group would be campaigning for the various positions jointly as one body when the electioneering campaign starts.

Though the remaining three have not yet held press conferences to declare their intentions, reports indicate they have begun   underground work with vim and vigour.

These gentlemen DAILY GUIDE sources indicated have begun touring the 39 constituencies in the region to talk to party activists with the view of winning their support.

The paper gathered that among the probable contestants, Alhaji Saanie, Mr. Braimah and Mr. Mensah are the early favourites based on the massive following they command within the party.

Whilst, Alhaji Saanie and Mr. Mensah are looking forward to utilizing their overwhelming popularity in the party to realise their dream, Mr. Braimah would be relying on his financial strengths to outwit his contenders.

Daniel Ohene Agyekum, the man who takes pride in the invocation of the spirit of the river goddess, Antoa Nyamaa when dealing with his perceived adversaries is the current NDC Regional Chairman.

He is unlikely to seek re-election for the reason that, he is purportedly being penciled by President Mills to represent the country in the United Kingdom as Ghana's ambassador.