Kaneshie, the suburb that evokes fear 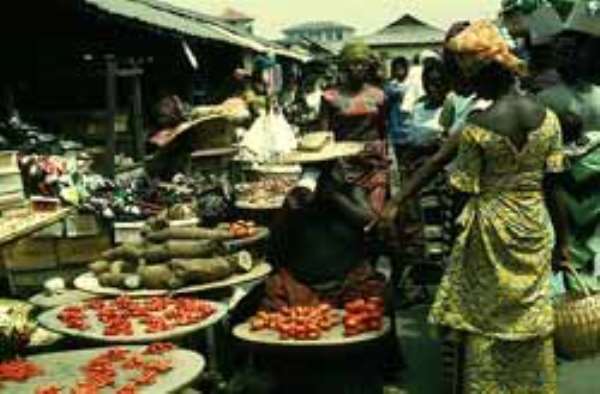 Kaneshie is one of the prime suburbs of Accra. It is the home of the largest market - the Kaneshie Market Complex - where almost every conceivable item from dawada to beef is sold.

Unfortunately, this great area is earning a very bad image for itself because of very serious occurrences.

Many workers have lost valuable items, from mobile phones to purses, wrist watches, necklaces and handbags.

A journalist, Okpo Kofi, had closed from work late one evening. He was crossing over from one side of the road to the other, and on the foot of the overhead bridge robbers pounced on him with dangerous weapons and robbed him of his mobile phone and other valuables.

Another time, I was in a tro-tro and on reaching Kaneshie, a young man seen loitering around the vehicle picked a mobile phone a passenger was holding, and fled.

The bewildered passenger only had to console himself with the words "even the phone is faulty and I was , planning to dispose of it and acquire a new one. He can take it away".
The footbridges have been turned into trading centres and places where beggars sit to beg for alms. Some evangelists also preach on the footbridges while some pickpockets also pretend to be crossing over only to snatch people's bags, mobile phones, and other valuables.

The two instances the writer has alluded to are just a tip of the iceberg.

All the crimes at Kaneshie take place between Mpamprom and the second footbridge near the Kaneshie Market Complex.

Vehicles park haphazardly for passengers to board or disembark. Porters hang on vehicles and peep in to find if they could get some loads to carry. Commuters move from one side of the dual carriage way to the other by use of the footbridge. The hustle and bustle around the Kaneshie Market Complex has provided a fertile ground for pickpockets to practice their trade.

The Kaneshie Market and the lorry park around the market have also not helped matters much. The market attracts a lot of patronage and as people go in and out to shop the social miscreants also have a field day.

The state of insecurity that has been created at the Kaneshie Market area scares many people away from going to do business or pick a vehicle from Kaneshie to any destination in Accra.

Sometimes one wonders if the police are in Kaneshie because of the audacious manner the robbers go about their work.

They hover around a vehicle, time the passengers to identify those who are not attentive and before one could say jack they snatch whatever item they can lay their hands on and flee. Some of the bold robbers manage to steal items or ransack vehicles the owners have parked around the market

The management of the Kaneshie Market Complex, in its bid to improve security around the market, has decided to extend the market and build a new car park. It has also decided to close the market early on each day.

Other residents, however, are of the view that a new market complex should be built around the Mallam Junction in order to reduce the human traffic from Kaneshie.

Mr Akwasi Donkor, a porter, said if a new market complex similar to the one at Kaneshie is built around the Mallam Junction area there would be no need for many people in the western part of Accra to move to Kaneshie or Accra Central to do business.

Another resident, Mr Kofi Brenya, is of the view that the security agencies must check the haphazard parking of vehicles along the road and clear all those who have been hovering around vehicles and snatching people's valuables.

Abena Tawiah, a worker, called for adequate lighting around the area with close circuit television (CCTV) cameras mounted to photograph the social miscreants and drivers who misbehave.