A Little Rawlings Something For Reflection(1) 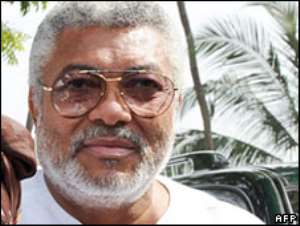 I have always wondered whether politicians read over their speeches and make the necessary corrections before they mount the podium to deliver them or more importantly if they seat down to analyze their speech after they have spent hours on end moving up and down like an excited goat.

Politicians in all places, at all times have made the most side-splitting remarks, the most far-fetched assertions, told half-truths and complete lies. And our Ghanaian politicians have been no different demonstrating to every extent grave “animal-farmism”. I don't want to keep the reader in suspense since you might be wondering why the caption “A LITTLE RAWLINGS SOMETHING FOR REFLECTION………” I thought I would do that fair “gentleman” and the whole of NDC a bit of duty by referring him to his speech made at Makessim in the Central Region of Ghana on Monday, 26 June, 1995. I find this most necessary since “SOME OF THEM, THE WAY THEY ARE BEHAVING NEED TO HAVE THEIR HEADS EXAMINED. I AM SAYING A FACT.”

After jumping from one subject to the other like the clown he is, he finally landed and made some attempt to talk about the failings of Africans.

Hear him “BLACK CONTINENT Ever since every single country on this black continent won their independence, how many of them haven't wound the clock many times backwards? Tell me, how many of us have made a success programme of African independence? We should be ashamed of ourselves. Such a rich continent, a continent with rich ancestry, with traditional values. We end up being derailed time and again.

While people who are supposed to know better, today, if you declare, if I were to say even, elections today, no sound respectable person will stand on a platform because they have taken over the newspapers to create an environment hostile to people of integrity so that only they, the criminals will have a field day.”

What derails us aside the inane coups led by men like him? What derails us apart from the nonsensical, cynical, contemptuous and egotistical attitudes of past leaders of his ilk who have no respect for legal processes and law?

And hear him talk about “criminals”.
Were “criminals” responsible for the allegations of vote-rigging the N.D.C preached during the last elections? Were the “criminals” those who accused the N.P.P of dealing in narcotics? If the answer to these questions is yes then we certainly do have a lot of respected “criminals” roaming the streets of Ghana.