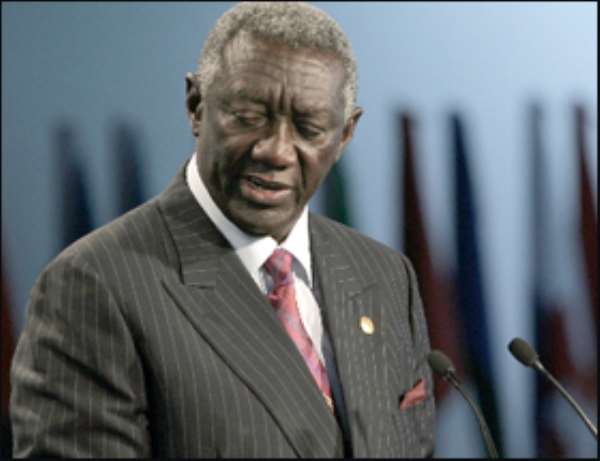 Outgoing President John Kufuor PRESIDENT J. A. KUFUOR'S proposal for the nation to consider five-year tenure of office instead of four for government has met with a disparate remark by a lecturer at the Engineering Department of Kumasi Polytechnic.

Delivering his last State of the Nation Address to Parliament on Monday, the out-going President said the four-year term for a government in a developing country like Ghana was relatively short and could not allow for the full implementation of policies and programmes.

Reacting to the president's suggestion in an exclusive interview, Dr. Osei-Wusu Achaw said even though President Kufuor might have good intentions based on his experience, the five years for a constitutionally elected government in Ghana is unnecessary because a 'good government' has the possibility of ruling for eight years, which is two terms in office.

According to him, the four-year period is good enough for any government to make a meaningful impact by using the first year to sort things out, the second and third years to demonstrate its capabilities, and the last year to wrap up programmes and policies.

Dr. Achaw, who is the immediate past Dean for the School of Engineering at K-Poly, stated that the framers of the 1992 Republican Constitution probably also took into account the need for a 'bad government' to be quickly done away with by the people, hence the four-year term of office.

He said after long years in office, a government turns to be arrogant and complacent of the progress and gains for which reason there should be a change in every eight years for another group of people to give different perspective in running affairs of a nation.

Meanwhile, the senior lecturer had earlier expressed concern over the New Patriotic Party's (NPP's) withdrawal of the legal suit to restrain the Electoral Commission (EC) from declaring the December 8 presidential run-off result.

The ruling party led by its national chairman, Peter Mac Manu, filed a writ at an Accra Fast Track High Court to challenge the result of the run-off poll, but withdrew prior to the closing of election at the Tain constituency in the Brong-Ahafo region last Friday.

Political observers believe President Kufuor's call on both candidates, Professor John Evans Mills and Nana Akufo-Addo, to respect the final result whilst appealing for calm in the face of complaints of vote-rigging might have contributed to the withdrawal of the suit.

However, Dr. Achaw said those who curtailed the due process of the law as engaged in by the NPP in the name of peace had done a great disservice to Ghana's democracy because the legal challenge was a test case for the maturity of the nation's democratic credentials.

“It is my hope that civil-society organizations will help address complaints of vote-rigging,” he stated and continued that such developments, if not addressed and swept under the carpet, have the propensity of encouraging the offenders to repeat them in future.

“We should learn to allow the rules of the nation play out. This will not in any way destabilize the country's peace; instead, it would strengthen it more and prove to the world that Ghana's democracy has come of age,” he argued.

He, however, called for support for the newly elected government of the National Democratic Congress (NDC) to succeed because the benefit will come to Ghanaians in general. From Ernest Kofi Adu, Kumasi