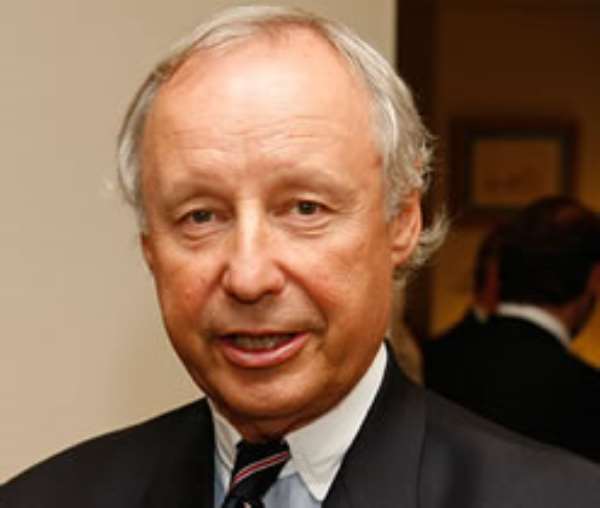 Around 4 a.m. on Monday, a prominent hedge fund manager who apparently had lost $1.4 billion with Bernard L. Madoff, telephoned a longtime client in Paris, sounding upset.

Journalists gathered on Tuesday at the Madison Avenue office where the body of Thierry Magon de la Villehuchet was found.

“I have to fight for my clients and myself,” the money manager, R. Thierry Magon de la Villehuchet, told the client, who spoke on the condition of anonymity because of investigations into the $50 billion Ponzi scheme Mr. Madoff is suspected of orchestrating. “It's a complete nightmare.”

A little more than 24 hours later, Mr. de la Villehuchet was found dead in his office on Madison Avenue. The evidence pointed to suicide, the police said on Tuesday.

Security officers discovered the body of Mr. de la Villehuchet, a co-founder of Access International Advisors, in a chair, with one of his legs propped on his desk. His wrists and his left biceps were slashed, said Paul J. Browne, a New York police spokesman. A wastebasket had been placed under his bleeding biceps, Mr. Browne said.

No suicide note was found, but sleeping pills and a box cutter were discovered under his desk.

Mr. de la Villehuchet, 65, was in his office at 7 p.m. on Monday and had asked the cleaning staff to clean up early because he would be working late.

Later that evening, one of the firm's partners asked a security guard to see if Mr. de la Villehuchet was still in his office, but the door was locked, and the guard had no key, the police said.

“He said he felt robbed,” the client said.
A native of the Brittany region of France, Mr. de la Villehuchet was described by friends as a man who was devoted to his firm. He founded Access International Advisors in 1994 with Patrick Littaye after his tenure as chairman and chief executive of the United States investment banking arm of the French bank Crédit Lyonnais.

Mr. de la Villehuchet, an avid sailor and a member of the New York Yacht Club, lived in Westchester County with his wife. The couple also owned a home in Brittany. No one responded to a telephone call to Mr. de la Villehuchet's home or to messages left at Access International's offices.

Access International is one of several so-called feeder funds that funneled money from investors across the globe into Mr. Madoff's collapsed firm. The news of Mr. de la Villehuchet's death came as investors in other feeder funds with exposure to Mr. Madoff, including Fairfield Greenwich Group and Tremont Group Holdings, began suing those funds alleging negligence and breach of fiduciary duty.

Access International managed $3 billion, but its Luxalpha American Selection fund invested all of its assets with Mr. Madoff. In a letter to fund investors last week, the New York-based firm called Mr. Madoff's arrest “a shocking development” and said it was assessing the situation.

Investors in the Luxalpha fund were mostly wealthy European clients of Rothschild investment bank and UBS, which was the custodian and administrator of the Luxalpha fund until this year, when Access International took over.

UBS has said that wealthy European clients, attracted by Mr. Madoff's stellar returns, had asked the bank to set up a fund to invest with him.