The Corruption of Jerry Rawlings 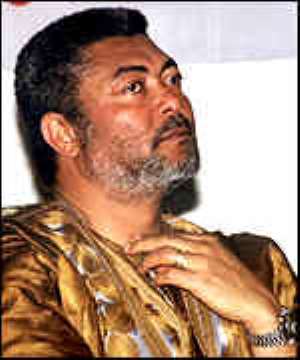 On the campaign trail for the upcoming December 2008 general elections, former President Jerry Rawlings' accusation of the ruling National Patriotic Party (NPP) as the most corrupt regime Ghana has seen is an old Rawlingsian song, most times without hard evidence but ridden with emotions and agitations.

For Rawlings, who ruled Ghana for almost 20 years, all Ghanaian governments, from practically first President Kwame Nkrumah to incumbent John Kufour, are corrupt except his. In 1979 when Ft. Lt. Jerry Rawlings emerged on the troubled Ghanaian political scene it was to “clean” the country of corruption – from the military to civilian regimes, Rawlings thought there is so much corruption that it has blocked the cogs of progress.

But, from all indications, much of the corruption talks were more mired in the long-running military regimes (21 years on the run against 6 years of one-party systems and 16 years of multiparty democracy). The political corruption game that saw regimes overthrown goes like this: Gen. Joseph Ankrah military regime overthrew the President Kwame Nkrumah administration in 1966. The coup was actually undertaken by Generals Emmanual Kotoka and Akwesi Amankwah Afrifa and Gen. Ankrah picked as Head of State. Gen. Akwesi Afrifa toppled the Gen. Ankrah regime in 1969. Gen. Kutu Acheampong overthrew Prime Minister Dr. Kofi Busia/President Edward Akuffo-Addo administration in 1972. Gen. F.W.K Akuffo's military junta had overthrown the Gen. Acheampong junta in 1978. The long-running Flt. Lt. Jerry Rawlings military regimes overthrew the Gen Akuffo and Dr. Hilla Liman regimes in 1979 and 1981 respectively.

But the Gen Akuffo overthrow was the bloodiest, seeing Rawlings and his Armed Forces Revolutionary Council (AFRC) going back to the 1960s and publicly executing the likes of Gen. Afrifa, Gen. Acheampong, Gen Kotei, among others, for alleged corrupt practices. The corruption issues were thought to be so serious by Rawlings and his AFRC folks that Col. Roger Felli, a Foreign Affairs Commissioner (Minister) under Gen. Acheampong, was killed for having just US$300 in his foreign accounts.

As much as Ghanaians came to acknowledge, as the corruption accusations dust settled, much of the corruption allegations were seen to be exaggerated and wired to the emotion-ridden citizenry or just a self-serving military officers in league with disgruntled politicians gunning for power. Some of the reasons for the corruption allegations were baseless, bordering more on politics than logic and evidence. This doesn't mean there are no corruptions. With state institutions to contain corruption either weak or not well thought out or non-existent, most Ghanaians gauge corruption by perception – the lifestyles of state officials, their families and cronies.

As Rawlings' anti-corruption ranting indicates, in all these depressing coups, most times there was no fuller proof of corruption but perception of corruption. Despite the acknowledgment that corruption is a challenge against the mechanisms of progress, from Gen. Ankrah to Ft. Lt. Rawlings, genuine attempts to resolve corruption challenges by instituting endurable state institutions drawn from within Ghanaian traditional values and the global transparency and accountability ideals (as the Botswanans have done in the last 20 years), were either shaky or non-existence till now when democracy dawned some 16 years ago.

In Rawlings' bloody anti-corruption crusade sloganeering outweighed higher reason and the creation of vigorous accountability institutions as the Nigerians did in the face of similar dilemma by creating the Economic and Financial Crimes Commission that seeks to “curb the menace of the corruption that constitutes the cog in the wheel of progress; protect national and foreign investments in the country; imbue the spirit of hard work in the citizenry and discourage ill gotten wealth; identify illegally acquired wealth and confiscate it; build an upright workforce in both public and private sectors of the economy and; contribute to the global war against financial crimes.”

Possibly, this is because these regimes weren't democratic and had very feeble accountability mechanisms, unfreedoms and muzzled press. As Rawlings' show, regimes do not see how corrupt they are till they are out of power. For Rawlings, none of his associates were corrupt but the rest of Ghanaians are, even if there are incontrovertible evidences to the contrary. In an unGhanaian ways, Rawlings is seen always defending in a threatening manner his associates implicated in corrupt practices.

Perhaps to intimidate and threaten the judiciary, Rawlings is a familiar face in law courts where some of his associates are indicted for financial crimes. The implications is that Rawlings do not trust the law courts, sees all indictments against his associates for financial crimes as politically motivated, and, in this context, undermine the rule of law as a mechanism to fight corruption.

For Rawlings, Tsatsu Tsikata, former head of Ghana's National Oil Company, a Rawlings appointee and family member, who has been jailed 5 years for financial crimes, is innocent but other Ghanaians in similar situation aren't. Critically, by indicting Tsikata, a very close adviser to Rawlings, the implication is that Rawlings himself has been indicted for financial crimes. Not surprisingly, Kwabena Agyepong, a former presidential spokesman for President Kufour, has revealed that Rawlings knew and encouraged Tsikata's financial crimes.

Under Rawlings national debates about national financial issues – from the sell of state companies to how foreign grants or loans are used – were either nil or even if there were debates it was done in fear or most times shrouded in secrecy. In fact, most of the state companies Rawlings' regimes sold were masked in un-transparency. Ghanaians were shocked when recently a Norwegian court involving officials from Scancem, a company that formerly owned Ghanacem, the cement producing company. Scancem officials are said to have paid millions of dollars to Rawlings' associates to ensure that they would retain the monopoly of cement production in Ghana. The money allegedly went to former Rawlings' presidential advisor, PV Obeng (who was effectively Prime Minister under Rawlings' military junta Provisional National Defence Council).

As corrupt practices among Rawlings and his associates increasing become public against the background of deaths, threats and fear during the Rawlings years, J. H. Mensah, chair of the National Development Planning Commission and former Senior Minister, reacting to Rawlings' corruption accusations, has revealed, as reported by myjoyonline.com, that “Rawlings has no moral right to accuse the NPP government of corruption when he and the PNDC government did worse things… If the former President is not corrupt, then how come a whooping sum of US$7 million went missing under his supervision…Rawlings owes Ghanaians an explanation as to how US$7 million cash got missing from a total of US$10 million, secured by the government of Ghana for the refurbishment of Tema Food Processing Factory.”

Under Rawlings, salaries of Ministers (or Secretaries, as they were called under the Rawlings regimes) and political appointees were not made public. Despite his high sounding sloganeering, Rawlings didn't make his salary public for the almost 20 years he was in power. Rawlings and his associate didn't declare their asserts for the almost 20 years they were in power as Presidents Ernest Bai Koroma (Sierra Leone), Benjamin Mkapa (Tanzania) and Umaru Musa Yar'Adua (Nigerian) have done. If Rawlings were to have done that he would have set a precedent, more as part of his purportedly anti-corruption undertakings, and the likes of President John Kufour, his ruling NPP appointees and future governments would have followed suit.

And if Rawlings is playing the corruption card, as the December 2008 general elections roll to its last leg, it is because democracy has brought more light to the development process. The lifestyles of Rawlings, who appeared on the Ghanaian political scene angry, hungry, malnourished, skinny, and owing some roadside chop bars (restaurant) in Accra for food he credited, and associates before and after they came to power tell Ghanaians about the degree of corruption during Rawlings' regimes.

Still, how were Rawlings, his Secretaries and numerous associates able to pay the schools fees of their children in expensive Europe and North America schools? How were they able to foot their numerous medical bills abroad? A Ghanaian university professor who went to one of the sons of Rawlings' Secretaries in one of the Canadian cities was shocked about the affluence he saw and asked, “How much were these Secretaries being paid a month for them to send their children to top schools in Canada and elsewhere, house them in expensive homes and have extra money to play around?”

When some Ghanaians ask Rawlings and his associates how they are able to live such high-life with their families, the familiar responses have been, “A friend or somebody paid for this or that.” Rawlings and his associates are yet to tell Ghanaians who these good Samaritans are and why should the good Samaritans should give millions of dollars to them. Despite his saintly pronouncements that will make the Pope or the Dalai Lama look like sinners, there is critically no daylight between Rawlings, accountability, transparency and corruption. The reason is Rawlings hasn't been as self-critical as his whole mission on the Ghanaian political demands.

Despite his projection of himself as corruption-free, his public and private executions for corruption, there are growing indications, as more evidence crop up, among some Ghanaians, that Rawlings and his associates enriched themselves and are corrupt based on their lifestyles before, during and after vacating power in 2000.

As the dark years of fear, harassment, threats and the possibility of being killed or vanishing recede in the face of Ghana's democratic growth; the facts of the J.H. Mensah exposure on the deep-seated corruption during the Rawlings' years will be made public. And then, and then may be, Gen. Acheampong, Gen. Afrifa, Col. Felli, and others would resurrect and come to ask Rawlings why he killed for them.

IMF a stop-gap measure, not permanent solution to revive Gha...
51 minutes ago