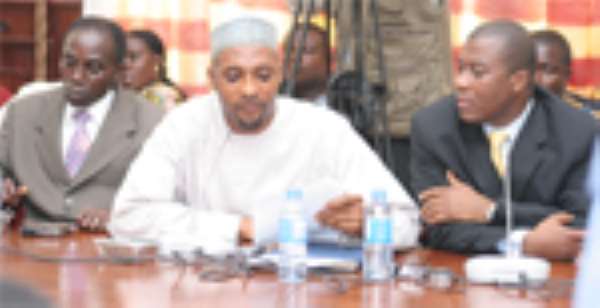 DELEGATES WHO attended the Asawase Constituency primary of the National Democratic Congress (NDC) had to flee for dear life when a brawl ensued between supporters of the two contestants, minutes before the commencement of elections.

The commotion started when two men said to be supporters of Alhaji Awudu Ariff, a contender for the seat, tried to distribute paraphernalia of their candidate to the delegates few minutes to the start of the elections, which was held at the Asawase Community Centre last Saturday.

The action incurred the displeasure of supporters of Alhaji Mohammed Muntaka Mubarak, the incumbent MP, also a contestant, who thought it was a ploy to induce the delegates to vote for Alhaji Ariff.

In their attempt to stop the two men from distributing the paper-made fans which had the portrait of Alhaji Ariff, hell broke loose between supporters of the two candidates and some regional executives of the party.

In the ensuing scuffle, Doe Tamakloe, acting Regional Secretary of the party, was said to have been slapped on the left cheek by a supporter of Alhaji Ariff who was bent on distributing the leaflets despite calls from Tamakloe to stop doing so.

For close to five minutes that the scuffle lasted the venue was turned into a boxing arena, as members of the two camps exchanged punches at the full glare of other supporters of the party and journalists present.

But for the timely intervention of the police who whisked away the two men from the congress grounds the situation would have been worse.

Ironically, Mr. Tamakloe, who admitted in an interview that the incident occurred at the congress grounds, denied being slapped by anybody, saying “it was a successful congress”.

“I was the first person to raise objection to the distribution of the paper fans to the delegates by supporters of Alhaji Ariff but the two men were adamant and continued with the act and to avert any confrontation I ordered the police personnel to take those men away from the congress grounds; though initially the two men resisted, I was not slapped by any of them.

“To me, this is one of the peaceful and successful elections ever held by the party in the Ashanti region,” Mr. Tamakloe indicated.

Alhaji Mohamed Sanni, Ashanti Regional First Vice Chairman of the party, stated that despite the fight between the two camps, which nearly marred the elections, the whole programme was successful.

Commenting on the brawl, Alhaji Sanni described it as natural and attributed it to passions among supporters of the two candidates.
Alhaji Muntaka, the incumbent MP won the NDC Asawase Constituency primary, having polled 185 out of the 240 total votes cast, while Alhaji Ariff managed a meagre 53 votes in the election, which was presided over by Mr. Owusu Afriyie, the District Electoral Officer.

Addressing the gathering after the election, Alhaji Mubarak promised to retain the Asawase seat for the NDC in the impending general elections.

He thus called for peace and oneness among the rank and file of the party to help the NDC achieve its aim of unseating the New Patriotic Party (NPP) government come December this year.