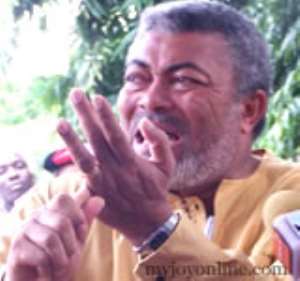 In this article, I intend to belabor how interethnic marriages, ethnic harmony and national unity are interrelated. I also wish to suggest how the elevation of the practice of interethnic marriages can foster national integration, spur social stability, and reduce ― or completely eliminate ― the likelihood of ethnic revolt in the future, with former President Jerry Rawlings' marriage a prime example of all that is inherently idyllic about interethnic marriages. My work is a mélange of scholarly research and individual knowledge, the latter as a result of my having lived in Ghana until my late twenties. Personal knowledge of the intricacies, nuances and idiosyncrasies of what it means to be a Ghanaian confers a level of practicality in analysis which only indigenousness can bestow, if an attempt to delve into such polemical argumentation, as this article engenders, is to be far-reaching and expedient.

According to an article by Irwin Deutscher, titled “National Policy and Ethnic Enclaves: One Way to Prevent Intergroup Conflict,” which appeared in the winter 2001 edition of the Canadian Journal of Sociology, social scientists have not been able to definitively define “ethnicity.” Deutscher notes that race and ethnicity have thus been used interchangeably, when dealing with societies. Obviously, ethnicity, in the Ghanaian context, refers to either the cogent juxtapositions of our values, or the acerbic theories of relativism endorsed by the various ethnic groups, with each reader likely to have already imbibed a particular perspective, or interpretation.

In the Ghanaian context, as noted earlier, we are dealing strictly with different ethnic groups, and what Deutscher calls a social construct ― “a shifting set of definitions of a group by itself or others.” Of the major Ghanaian tribal groups ― Akan, Ewe, Ga-Adangbe, Mole-Dagbani, and Guan ― Akans constitute 75% of the population, but Akans are themselves divided into many subgroups, such as Asante, Fante, Akwapim, Kwahu, Bono, et cetera (I am repeating the names for the benefit of non-Ghanaians in this forum). It is a known fact that endogamy, as opposed to interethnic marriage, essentially accounts for more than 85% of marriages in Ghana. And although interethnic marriage has made some inroads in the Ghanaian society, the thought-processes of many Ghanaians, especially of those steeped in tradition ― these people are generally found in the rural regions ― have changed little when it comes to accepting sons-in-law and daughters-in-law from groups outside of their immediate ethnic makeup, a situation that can, at best, be described as bigoted, insipid and obsolete.

In small towns and villages, the populations are quite homogeneous, as most outsiders are unlikely to move to these areas, due to the absence of white-collar jobs. As such, members of one clan or family may constitute more than one-half of a village. Under such circumstances, marriage between two members of the same clan is considered the norm. It gets dicey, however, when both partners hail from different tribes, or even different ethnic subgroups. A perfunctory look at some of the comments to articles posted on Ghanaweb.com in just the last 12 months reveals a dangerous trend: a number of people have been trumpeting the “superiority” of their own tribes, or ethnic groups, as compared to others, and so I dare to ask the question: What has happened to our “Ghanaian-ness?”

If we are to progress as a nation, the Asante should embrace the idea of marrying an Ewe, a Ga-Adangbe should cherish the thought of betrothing a Fante, and a Mole-Dagbani should welcome the notion that tying the knot with a Kwahu should be based on the latter's character and attributes, not on his/her ancestry, or lineage. Interethnic marriage is a surefire recipe for Ghana's cohesion, and we all need to embrace this view, in order to build a country that will, someday, become united and indissoluble.

Even with Ghana's ethnocentric sagas, researchers continue to prognosticate a peaceful co-existence among the various ethnic groups. The Ghanaian society mirrors that of Switzerland, in many facets. Switzerland is a country in which Germans, the French, Italians, and a panoply of immigrant groups have lived alongside one another for many centuries, without the usual xenophobic agitations seen in other places. Deutscher asserts that “cantonization is not a peculiarly Swiss adaptation, nor is it unique, nor does it require seven centuries to perfect. A more modern version of that solution has emerged successfully in Ghana.”

Deutscher, in his collaborative work with other sociologists, has discovered that the Chieftaincy Act of 1971 has been a major reason why Ghana remains intact today, free of the implosions and ethnic infernos suffered by some of the nation's neighbors in recent years. This legislation empowers chiefs to intervene in local cases, as well as “enforce customary tribal law related to such concerns as divorce, land disputes, child custody and the like. On the other hand, the act retains for the central [government] responsibility for the military, the judiciary, the economy and other national [issues].” The third aspect of the act “establishes regional and national assemblies where local chiefs 'could discuss and govern their affairs.'”

This three-tiered system, amazingly, preserves each tribal enclave's legacy and
uniqueness, in the midst of a continuously evolving socio-cultural environment. It is for the aforesaid reasons that sociologists believe Ghanaians are unlikely to attack one another with machetes any time soon, which is why those who have chosen to denigrate and assail the chieftaincy system in Ghana are, in my opinion, extremely myopic and antipathetic to national unity. What the chieftaincy institution needs, ultimately, is a modernization of its mores and practices, in order to eliminate crimes such as beheading.

I wish to laud ex-President Jerry Rawlings for marrying outside of his tribal enclave. If Ewes were so ethnocentric, a charge some misguided people have continued to label against the entire tribe, why did Madam Agbotui allow her son to marry Nana Konadu, an Asante? While Madam Agbotui may not have earned a college degree at any time in her life, she was intelligent and practical enough to realize that where matters of the heart were concerned, prejudice ― based on anachronistic beliefs that many Ghanaians have held on to for far too long, even in these times of modernity and egalitarianism ― had no place in her decision-making as mother of the would-be groom, so long as her son and future daughter-in-law were happy. While thousands of Ghanaians have married outside of their own tribes, including this writer, Rawlings, because of his fame and popularity, serves as a fine example of this type of positive interconnectedness.

Several weeks ago, someone wrote a piece about the so-called “dance” between Jerry Rawlings and the Asantehene, at the latter's deceased sibling's funeral in Kumasi. What some of us did not realize was the simple fact that, so long as Jerry Rawlings remains married to an Asante, he will continue to be an irrevocable part of that ethnic subgroup. As such, construing Rawlings' actions of that fateful day as more than just a simple reverence for the Asante King is, indubitably, accurate ― Rawlings' actions were also about the oneness and closeness he felt with those gathered at the funeral. Interethnic marriages will promote our “Ghanaian-ness,” if our elders will remove the logs in their eyes and jettison their ethnocentric beliefs, prejudices, and anachronistic practices, for these hoary beliefs continue to wound the hearts of young lovers, people willing to but usually unable to marry because one partner's grandpa believes that marrying someone from a different tribe is anathema to his clan's longstanding traditions!

Marriage is promoted and encouraged in many cultures; it is also a stabilizing, confirmatory institution for societies and individuals (Flakes, 2001). Thus, marriage ― endogamous and interethnic ― should be encouraged. Together, the positive influences of chieftaincy and interethnic marriage can unify Ghanaians, blur the lines of ethnicity, and promote social stability. Let us jettison the cancers of tribalism and ethnocentrism in our choices of future partners. Let us share our sons and daughters with others from outside our own ethnic groups, and we will produce a unified, strong and patriotic assemblage of men and women who will promote the national cause, rather than further their own parochial or ethnic agenda.

The writer, Daniel K. Pryce, in addition to two undergraduate degrees, holds a master's degree in public administration from George Mason University, U.S.A. He is a member of the national honor society for public affairs and administration in the U.S.A. He can be reached at [email protected]