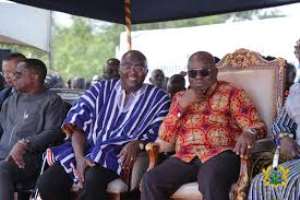 The economic crisis in Ghana has been a hot topic of conversation among both citizens and foreign investors in recent years. The country, once known for its stability and growth, has been hit hard by a combination of factors, including high debt levels, a struggling currency, and dwindling natural resource reserves.

As of 2021, Ghana's national debt stands at $42.9 billion, equivalent to 73.5% of its gross domestic product (GDP). This high debt level has been caused by a combination of factors, including a reliance on borrowing to finance public spending and a lack of effective debt management policies.

Furthermore, Ghana's currency, the cedi, has been struggling against the US dollar, leading to a rise in inflation and a decrease in purchasing power for the average citizen. The cedi has depreciated by over 50% against the dollar since 2018, making it increasingly difficult for Ghanaians to afford basic necessities such as food and fuel.

The country's natural resource reserves have also been a major contributor to the economic crisis. Ghana is heavily reliant on exports of oil and gold, which have seen a significant decline in recent years. The fall in commodity prices has led to a decrease in government revenue, forcing the government to turn to borrowing to finance its spending.

The economic crisis has had a significant impact on the lives of ordinary Ghanaians. High inflation has led to a rise in the cost of living, making it difficult for many to afford basic necessities. Unemployment levels have also risen, with the International Labour Organization estimating that over 30% of Ghanaians aged 15-24 are currently unemployed.

In response to the crisis, the government of Ghana has implemented a number of measures in an attempt to stabilise the economy. These include implementing a strict austerity programme to reduce public spending, securing a $1 billion loan from the International Monetary Fund (IMF) to help shore up the country's finances, and implementing structural reforms to improve the efficiency of the public sector.

Despite these efforts, the economic crisis in Ghana remains a major concern for both the government and the general population. Many fear that the situation will continue to deteriorate unless significant action is taken to address the root causes of the crisis.

The high level of national debt is a particularly pressing issue. In order to reduce the debt burden, the government must focus on improving its debt management policies and reducing its reliance on borrowing to finance public spending. This could involve implementing stricter controls on public spending, increasing the efficiency of the public sector, and implementing measures to increase government revenue.

Another key factor in addressing the crisis is improving the country's competitiveness in the global market. This could involve implementing policies to encourage foreign investment, such as providing tax incentives and improving the business environment. It could also involve diversifying the economy away from its reliance on natural resource exports, such as by investing in the manufacturing and service sectors.

Finally, addressing the high levels of unemployment among young people is crucial in order to improve the country's economic prospects. This could involve implementing programmes to provide training and support for young people looking to enter the workforce, as well as implementing policies to encourage businesses to create new jobs.

The economic crisis in Ghana is a complex and multifaceted issue that requires a comprehensive approach to address it. While the government has taken some steps to stabilize the economy, much more needs to be done in order to restore the country's growth and improve the lives of its citizens. Some have called for a reconsideration of the so-called 'cathedral' for God, which the president and his finance minister are bent on funding at the expense of the suffering Ghanaian in an economic crisis.

The vice president of the country, who is also the head of the economic management team has been silent in the last couple of years for obvious reasons. He is nursing his newfound ambition of becoming the next president of Ghana, having supervised a failed economy he hopes to rebuild when given the opportunity to realize his dreams.