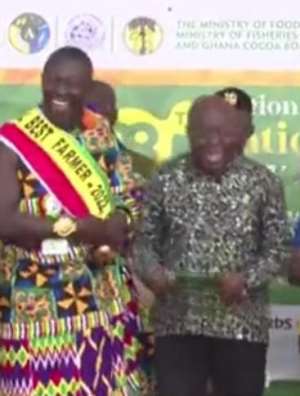 Akyempimhene of Asante-Juaben in the Ashanti Region, Nana Yaw Sarpong Serebour has been adjudged the 2022 National Best Farmer at a ceremony in Koforidua, the Eastern Regional capital.

The 43-year-old took home a cash prize of GHS1,000,000 and two nights' full board complimentary stay for two at the Peduase Valley Resort.

Nana Yaw who hails from Asante Juaben with 22 years of experience in farming has several farms dotted across the Ashanti Region providing employment opportunities to several families in the areas he operates.

He takes home a tractor, trailer plough, and sprayer.

The second runner-up went to Professor Akwasi Asabre Ameyaw from Techiman North in the Bono East region. He received a tractor with other Agriculture implements.

He received a double cabin truck.

The 38th National farmers' day celebration was under the theme “Accelerating agricultural development through value addition” and was held at the Jubilee park in Koforidua.

President Nana Addo Dankwa Akufo-Addo speaking at the ceremony assured Ghanaians that agriculture will continue to remain a top priority of his government.

He indicated that several investments have been made by his administration in the sector.

“The massive investments” made in the sector attest to his commitment to the sector, he said.

“The positive narrative about the government's support to the agricultural sector is that, unlike several other countries, Ghana is better prepared, and has demonstrated resilience to the current adversities threatening to destabilize our food systems.

“This has been possible because of the sound, pragmatic policies and programmes rolled out at the inception of my stewardship.”

However, under the planting for food and jobs (PFJ) initiative which he introduced, maize production reached 3.4 million tonnes by 2021 and rice by 2 million metric tonnes.

“The credit must go to our gallant farmers, fishers, and value chain actors who embraced the PFJ policy and leveraged the opportunities created by the enabling environment for agricultural development,” he said.