The Kneeling And Begging John Mahama Never Got From Mr. Ken Thompson 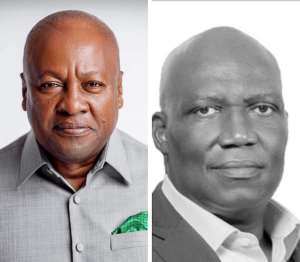 I had mixed feelings when I watched a 61 year old Chartered Accountant, and the CEO of Dalex Finance and Leasing Company Ltd. Mr Kenneth Kwamina Thompson knelt in a live TV program to beg the President of Ghana, Nana Addo Danquah Akufo-Addo, to fulfill his part of the bargain within the confines of the social contract he signed with the people of Ghana in 2021, January 7. After watching the Investment expert knelt on Umaru Sanda Amadu’s Face 2 Face program on Citi TV, I didn’t know whether to be angry, sad or disappointed. Although, at a point, I felt this gesture of Mr Ken Thompson was symbolic of a failed President, who has breached his part of the agreement with the people of Ghana, I still had a feeling that it equally demonstrates how weak our senior citizens have been rendered by the Nana Addo’s regime.

What Thomas Hobbes and John Locke contemplated to be the desired outcome of their proposed social contract theory is not the case in Ghana today. What I learnt about this contract is a hypothetical agreement between the society (the people) and the state (the government), such that the former give up some of their powers and liberties to the latter to enforce agreed rules and to provide public goods in the process.

Unfortunately, in our current situation in Ghana, the citizens as part of their bargain, act benevolently to pay their taxes, give power to the government, give up their liberties, remain calm and hopeful in a hopeless situation, while President Akufo-Addo on his side of the bargain remains egoists and solipsistic, garnished with some bloated sense of entitlement. How do you expect a stable social and political context with  this kind of arrangement?

I can now feel why Akufo-Addo remains unshaken when he decided to unleash his cruelty in what he called “the banking sector clean up.” Indeed, I can now understand why Nana Addo has that sense of entitlement and can curse taxpayers for doing nothing wrong but demanding their fair share of the National cake. I can understand the reasons for the show of arrogance by the President and his family members who have hijacked the government machinery and captured the state. All these can happen because, the people who are supposed to speak true to power do not only lack the balls to do so, but feel obliged to keep pampering the President to sleep.

All these people, who today are seen begging the President, are helplessly watching the Minister of Finance, the cousin of the President, with advice from his own company, Data Bank, engages in reckless borrowing, which has ultimately landed us into this economic ditch.  All these people who are now kneeling before the President, with some murmuring instead of shouting, I dare ask, will they have done same or did they do same under a Mahama government? Is Nana Addo a King Pharoah incarnate or he’s the President who begged us for our votes?

President John Mahama did not get this low with his posturing and deliverables yet, he was attacked, disoriented, hounded and without a space for him to even let out his vision. In the midst of delivering one of the most ambitious infrastructure program, Mahama was called names, he was in fact, called out without hesitation and sometimes without any reasonable grounds.

If there must be anybody kneeling and begging or apologizing, it has to be President Akufo-Addo and not citizens. The kneeling should obviously not come from senior citizens like Mr Ken Thompson, a 61 year old man. He should muster courage like KKD, like Mr Kwame Mpianim, to call out the President otherwise, he should just go back to his shelves and leave us to suffer in solitude. I believe his company, Dalex Finance is equally suffering in this economic mess we find ourselves now.

What we, the young ones expect from Mr Thompson is not kneeling and begging the President but by joining us to demonstrate on the streets against this misrule. He should join us as one of the middle class as some did in 204/15/16. He should be bold to join us cry real hard and call out the President. What is our crime as citizens? Even some tyrants are magnanimous and compassionate with their people, not to talk of a President who begged us to vote for him to come and change Ghana in 18 months.

If there is anytime for Mr Ken Thompson to man up and stop begging the President in live TV programs, that time is now and not later. I watched him recalled how poverty befell Ghana in the 70s and that he’s seen same coming now. Well, in the 70s when it happened, the men then didn’t kneel to beg those Presidents, they instead took power from them. President Akufo-Addo cannot be treated like a spoilt chap who cries over nothing, he has to be treated like a failed President. The time is now or we all perish later.

I come in peace.